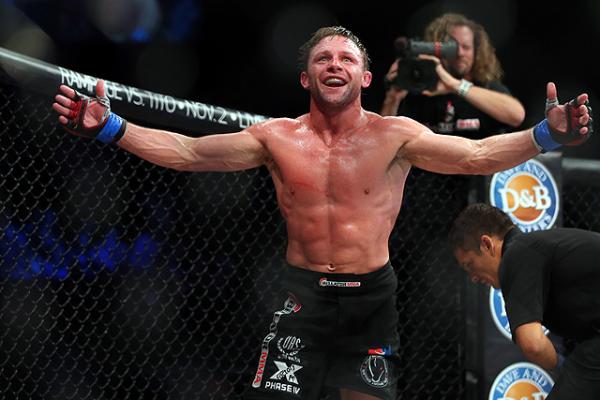 Joe Warren is a perfect 6-0 in fights that reach the judges. | Photo: Dave Mandel/Sherdog.com


Joe Warren talks the talk and often walks the walk.

The self-anointed “Baddest Man on the Planet” will meet Rafael Silva for the interim Bellator MMA bantamweight championship in the Bellator 118 main event on Friday at the Revel Atlantic City in Atlantic City, N.J. The winner of the Bellator 2013 Summer Series bantamweight tournament, Silva replaces injured 135-pound champion Eduardo Dantas on short notice.

Warren has rattled off three straight wins since suffering a violent knockout loss to Pat Curran in March 2012. The 37-year-old last appeared at Bellator 107 in November, when he stopped Travis Marx on a second-round knee strike and follow-up punches to win the Bellator Season 9 bantamweight tournament. He was an NCAA All-American wrester at the University of Michigan and went on to win three national titles and a world championship in Greco-Roman wrestling. Warren has compiled an 8-2 record since arriving in Bellator a little more than four years ago.

Silva will carry a 13-fight winning streak into the five-round headliner. The 29-year-old Renovacao Fight Team standout last appeared at Bellator 102 in October, when he defeated Anthony Leone by unanimous decision at the Visalia Convention Center in Visalia, Calif. Silva has delivered 17 of his 21 career victories by knockout, technical knockout or submission and sports 12 first-round finishes on his resume.

With the Warren-Silva showdown as the centerpiece, here are 10 facts surrounding Bellator 118:

FACT 1: A disciple of Bellator middleweight champion Alexander Shlemenko, Andrey Koreshkov trains out of Omsk, Russia, where sub-zero temperatures have been recorded in eight out of the 12 months of the year.

FACT 2: Nine of Philadelphia Fight Factory representative Sam Oropeza’s 13 career fights have ended inside one round.

FACT 4: Bantamweight Thomas Vasquez will enter his promotional debut at 7-0, but the seven men he has defeated own a cumulative record of 11-27.

FACT 5: Bellator Summer Series light heavyweight tournament quarterfinalists Liam McGeary and Mike Mucitelli are a combined 12-0, with 11 finishes between them.

FACT 7: Timothy Woods has not recorded back-to-back wins in more than six years.