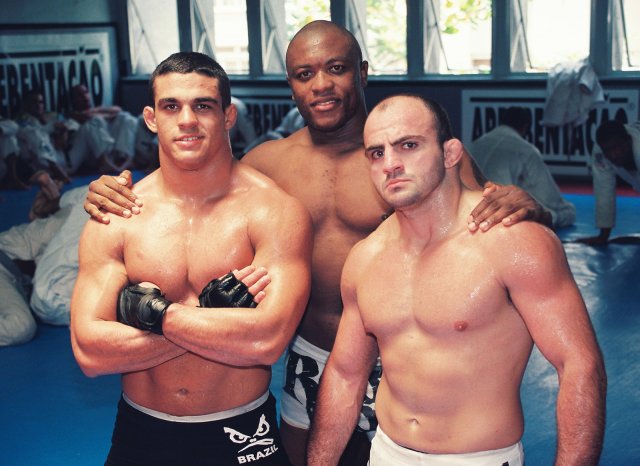 
When discussing the greatest fights ever to take place in the Ultimate Fighting Championship, what comes to mind? Among more recent fare, Israel Adesanya vs. Kelvin Gastelum was outstanding, or even the main event of the last UFC pay-per-view, Deiveson Figueiredo vs. Brandon Moreno. Classics like the first Anderson Silva–Chael Sonnen fight, Mauricio Rua vs. Dan Henderson 1 and Robbie Lawler vs. Rory MacDonald 2 all spring to mind. For the more old-school crowd, Frank Shamrock vs. Tito Ortiz was amazing. But what if I were to tell you that one of the greatest fights in the history of the promotion is virtually unknown and never talked about today? And not only was it an outstanding contest ahead of its time, but was one of the biggest upsets ever, derailing what promised to be an all-time great career?

I'm talking about the fight between Carlos Barreto and Dave Beneteau that took place at UFC 15, on Oct. 17, 1997. Since neither name will likely be familiar to the average fan today, let's provide context to their clash. Barreto, debuting in the UFC, was all set to become MMA’s next big superstar. Standing 6-foot-4 and a lean, muscular 235 pounds, with long limbs, the Brazilian cut an imposing figure, resembling an elite athlete in comparison to the pudgy bodies one often sees at heavyweight, whether in 1997 or 2020. Moreover, the 29-year-old was already highly decorated and successful. On top of being a Brazilian jiu-jitsu world champion—a major predictor of MMA success back then—Barreto was also a perfect 7-0 in MMA, thanks to early tournaments in Brazil. Nor had these victories come against bums. In his first official fight, he choked Mikhail Ilyukhin, a very strong, dangerous Russian sambo expert who is best known today for holding submission victories over a young Igor Vovchanchyn and Randy Couture. (Yes, there were controversies in both fights, and I may cover them in a future installment.)

Barreto had also submitted monstrous 330-pound American wrestler Dan Bobish, and perhaps most significantly, tapped out future UFC heavyweight champion Kevin Randleman after a grueling 22-minute battle—there were no rounds or rest periods at the time. Barreto certainly wasn't lacking in fighting spirit or toughness, either. He had been badly hurt by the much larger Bobish, but had pulled through to win regardless. In his last outing, a superfight in Brazil, Barreto had decimated UFC veteran “Polar Bear” Paul Varelans, one of my favorite old-school fighters, a 6-foot-8-inch, 350-pound behemoth who claimed to be a master in the art of “trapfighting,” in just two and a half minutes with punches and elbows from mount. Barreto was set to follow in the footsteps of another Carlson Gracie product, Vitor Belfort, as the next big name in the UFC.

Standing in his way was “Dangerous” Dave Beneteau, a lesser regarded opponent than many of the names Barreto had already defeated. Beneteau was a decent but unexceptional wrestler from Canada who had destroyed guys who had no clue how to fight, but was badly beaten by any good opponent. He is probably best known for being obliterated in three minutes by Dan Severn in the final of UFC 5, and then being submitted in back-to-back fights by Oleg Taktarov. Against the one common opponent he and Barreto shared, the aforementioned Bobish, the Canadian had lost by TKO in just under five minutes.

If gambling lines were around back then, Barreto would likely be a roughly -1000 favorite, comparable to Ronda Rousey against Holly Holm or Georges St. Pierre against Matt Serra. (Neither of which is the biggest upset in UFC history.) However, the 29-year-old Beneteau had a few aces up his sleeve. He had been training in both boxing and submission grappling since his last appearance in the UFC two years before, and was in the best shape of his life, despite the announcers claiming he was 260 pounds. Then again, the booth stated incorrectly that Beneteau was 30 years old and that Barreto weighed 253 pounds, so one has to take this with a grain of salt. Beneteau was motivated and not about to succumb easily, as Varelans had.

Coming to the cage, Beneteau was showered with boos, and also sported one of the most unusual pieces of fight attire I've ever seen: black tights with large rips near the knee. I would love to know the story behind that. Barreto, for his part, wore the Red Nose fight trunks that were trendy at the time, yet another contrast between the two. The fight began and the two immediately clinched, with Barreto throwing uppercuts on the inside and seeking to get his patented outside trip. At this point, Barreto threw a headbutt and was warned by referee “Big” John McCarthy. One can hardly blame him for this foul; headbutts had been legal in all his past MMA fights in Brazil, and were even legal in the UFC as recently as the previous event, UFC 14. After Barreto grabbed the cage, another previously legal tactic that had recently been banned, McCarthy stepped in and separated the two, sending them back to their starting positions.

Soon thereafter, Barreto scored on a beautiful turning single-leg takedown and took Beneteau’s back. Based on their previous performances, this is where Beneteau should have gotten mauled, and at first, that's exactly what happened, as Barreto flattened Beneteau out and rained down punches to the back of the head—a tactic that had not yet been banned. But no so fast! Demonstrating his recent training on the ground, Beneteau felt Barreto get a little off-balance and posted right back up to his feet.

They separated, and Beneteau waved Barreto on, as if to say, “Is that all you got?” The crowd that had previously booed the Canadian was suddenly in pandemonium, yelling and cheering like crazy. After a few jabs, they clinched again, but it was now more even, with both men landing dirty boxing. Barreto pulled on the Canadian's waist, but Beneateau grabbed the cage on his way down, ending up on top. I can't blame him for this foul either, as Barreto had been grabbing the cage all fight long, despite constant admonishment from McCarthy.

Once on top, Beneteau unleashed a brutal series of straight rights to Barreto's head, which was resting flat on the canvas, a no-no in MMA. They hurt the Brazilian badly, and one seemed to put him out for a half-second, before the next jackhammer fist woke him back up. Again, showing the heart and grit of a champion from the brutal, nearly no holds-barred Universal Vale Tudo Federation events, Barreto somehow managed to get back up to his feet, clearly concussed. UFC color commentator Jeff Blatnick, an Olympic gold medalist in Greco-Roman wrestling and normally a calm presence in the booth, exclaimed, “What a great fight!”

With both men feeling the pace, Barreto displayed a very solid striking game for a BJJ ace of that period, throwing some competent jabs and a high kick that connected hard on Beneteau's collarbone. Imagine: If it had been just a few inches higher, we would remember this fight very differently, as the first UFC match featuring a head kick knockout. Beneteau, reeling, managed his own desperation double-leg takedown. Barreto, however, quickly scrambled back up.

At this point, only six minutes in, both men were so tired that they took turns putting both hands on their knees. Describing the rest of the fight would be pointless, except to say that Barreto and Beneteau were fighting on pure will, trading vicious blows at distance, in the clinch and on the ground. It was less a matter of technique and strategy and more of instinct, the kind of desperate struggle one rarely sees in the UFC nowadays for extended periods of time, thanks to five-minute rounds. It was also noteworthy for the constant changes of location and variety of fighting involved. Back then, if a fight hit the ground, it normally stayed there. This one had it all; grappling, clinch fighting and striking, everywhere imaginable.

In a massive upset, Beneteau won the decision, to raucous applause from the same fickle crowd that had booed him 15 minutes ago. While this was the semifinal of the UFC 15 heavyweight tournament, it will come as no surprise that the spirited Canadian was unable to continue. And considering that Mark Kerr was waiting in the finals, that may well have been for the better.

What happened to both men afterwards? Barreto, the seemingly can't-miss star, would never fight in the UFC again. He went back to his native Brazil to compete in the IVC, and later joined Pride Fighting Championships. His career ended up being a mixed bag. After his venture in the UFC, he would record victories over Branden Lee Hinkle, Tra Telligman, Bobby Hoffman and even a young Ben Rothwell (!) but would lose to most other notable names, such as Vovchanchyn, Gilbert Yvel, Ian Freeman, Travis Wiuff, Aleksander Emelianenko and Vladimir Matyushenko. Ultimately, his game never evolved after that major setback against Beneteau.

As for Beneteau, did this amazing victory revitalize a previously stagnant MMA career? Sadly, no. Instead, he was more a one-hit wonder. For whatever reason, the UFC never invited him back. With few other opportunities to make a living from the sport back then, Beneteau fought only briefly and sporadically before retiring. Today, he works as a criminal lawyer. However, both men can take heart in that they put on a rousing, thrilling display of all-out war and toughness, one that sorely deserves to be watched and remembered by more fans.
« Previous Forgotten Fights of Yesteryear: Chuck Liddell vs. Guy Mezger