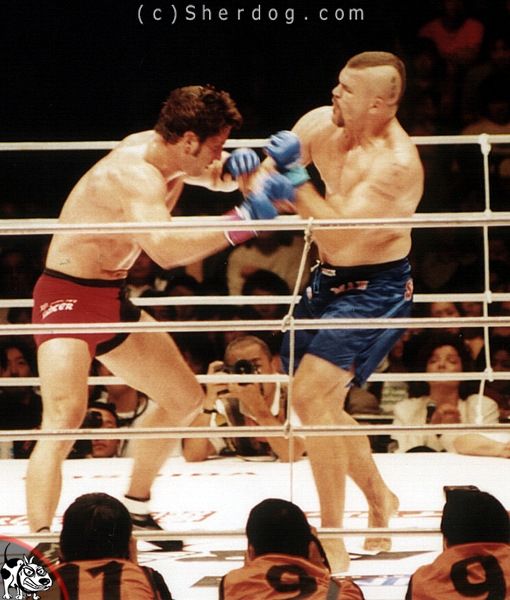 Of Chuck Liddell's three-fight excursion into Pride Fighting Championships, two are beloved classics. His clash with a young Alistair Overeem is considered one of the most exciting, back-and-forth wars you'll ever see that spanned five minutes or less, as well as a beautiful knockout for the “Iceman.” His first encounter against Quinton Jackson was another tremendous battle, one that occurred in the semifinals of Pride's middleweight grand prix and had major ramifications for the argument about whether Pride or the Ultimate Fighting Championship was better.

Yet what if I was to tell you that it was the third fight, against Guy Mezger, that was arguably the best, most entertaining of the trio, one that every MMA fan is depriving themselves if they haven't seen? It's also one I very rarely hear about nowadays. Before diving into the contest itself, let's acquaint ourselves with both men at this stage in their careers.

Mezger is a lesser-known name to MMA fans today and that's a crying shame. In a parallel universe where things had gone just slightly differently, he might be regarded as one of the 20 greatest mixed martial artists to ever live. As noted in a previous article, Mezger was considered more talented than Frank Shamrock but unlike Shamrock, he never left The Lion's Den, to the detriment of his fighting abilities and career alike.

Nonetheless, Mezger had considerable success in the sport and his record, while decent, doesn't do him justice. Scrolling through his ledger, his only wins over famous names are a submission of a young Tito Ortiz in the UFC, a triumph over Semmy Schilt in Pancrase and two wins over Yuki Kondo, also in Pancrase. However, Mezger absolutely defeated Kazushi Sakuraba in the opening round of the Pride 2000 Grand Prix. When the judges farcically declared the contest a draw and proclaimed additional tie-breaker round, Mezger's cornerman, Ken Shamrock, refused to allow his charge to go out. As unjust as the ruling was, Shamrock’s obstinacy did Mezger no favors, as he was simply saddled with a loss. Interestingly, if not for that robbery, we wouldn't have had the classic 90-minute duel between Sakuraba and Royce Gracie in the next round of the tournament.

The Sakuraba fight was not the only loss Mezger has which should be a win instead; he also defeated Ricardo Arona months after the Liddell fight, only for the Brazilian to receive the split verdict. While more debatable, it's notable that even at the very end of his career, Mezger took a young Antonio Rogerio Nogueira to a split as well. Sadly, just as Mezger was about to return to the UFC for a rubber match with Ortiz at UFC 50, he started suffering stroke-like symptoms and was forced to retire. However, that was still several years away; when Mezger fought Liddell at Pride 14, he was 33 years old and in the prime of his career, an exceptionally talented striker with solid takedown defense and submissions for that era.

Liddell needs little introduction for MMA fans, even nowadays, but it's important to note where he was professionally at the time of the Mezger fight, his first appearance in Pride. Already best friends with and being managed by UFC President Dana White, and still close friends with Ortiz, Liddell was attracting buzz in the UFC, having easily outpointed Jeff Monson at UFC 29 during the SEG era, then scoring a highlight reel knockout of former heavyweight champion Kevin Randleman in a little over a minute at UFC 31, in the Zuffa era. However, Liddell was still far from a major star and would need several more wins in the UFC before he received a title shot. Thus, he was exactly the type of skilled, but expendable fighter that White could allow to fight in Pride. (The reasoning being that Pride would then send its own fighters to compete in the UFC, which never materialized.)

In terms of skills, however, Liddell was close to his prime. His boxing wasn't as good as it would later become, but he used far more kicks and was younger and more athletic, which was reflected in his movement.

Looking at the final result—Liddell winning by knockout at 21 seconds of Round 2—without viewing the fight itself, one may believe that Liddell trounced his opponent over the 10 minute first round before stopping him early in the second stanza, yet nothing could be further from the truth. For the first 10 minutes, Mezger administered an absolute beating on “The Iceman,” showing the clear superiority of his striking technique. Liddell had moments of success, including a nice leg kick one would rarely see during his championship reign in the UFC, but Mezger had a much better sense of distance and used far more movement, repeatedly tagging his opponent while being just out of reach for the retaliation. This was especially impressive given that Liddell had a considerable reach advantage. Mezger showed off a very sudden, fast roundhouse kick to the head that still looks gorgeous today, as well as an effective side-kick, a technique that is common in modern MMA but was largely unique to Mezger back in 2001. His most effective blow, however, was a nifty, very technical left hook, with a tight arc and plenty of rotation, with which he tagged Liddell consistently. He also had particular success with the left hook to right cross combo, sometimes even chaining the roundhouse kick to the end. Even when Liddell avoided the left hook, the straight right or kick would connect.

Mezger looked absolutely spectacular for the majority for the first round, a striker far ahead of his time, while Liddell was simply absorbing damage and inflicting little of his own. Another problem here is that Liddell was looking to land a big, solitary punch, while Mezger utilized combinations. However, Liddell was undeterred, and about seven minutes into the first round, made a concerted effort to take Mezger down. Mezger ably stuffed the attempt, as he had earlier in the match, but Liddell landed some brutal punches to Mezger's body in the clinch. Considering that Mezger was already starting to breathe heavily, it was a very intelligent move that would pay dividends later. Gaining a little bit of separation, Liddell landed a powerful right cross that clearly got Mezger's attention, and was the best connect of the fight so far. However, that wasn't yet a turning point, as Mezger landed a few knees to the body and then got back to range.

With both men tired and slowing down eight minutes into the match, Mezger landed a pinpoint perfect overhand right that knocked Liddell down. With Liddell still reeling, Mezger landed a left high kick to the head for good measure. Liddell managed to roll in the direction of the kick at the last moment, though it still hurt. Fans today might think Liddell always had a weak chin because of later knockout losses, but this match indicates otherwise. Most fighters would have been finished there, but Liddell recovered enough to clinch and recovered full control of his legs shortly thereafter. That version of Liddell had a tough beard as well as the heart and will of a champion.

After that furious exchange, punctuated by Mezger throwing Liddell off from the clinch, both men were exhausted, so much so that neither did much of anything for the next 90 seconds, trying instead to catch their breath. The bell sounded to end a terrific round of fighting, decisively won by Mezger.

Round 2, however, was a different story. Even after the break, Mezger was clearly tired, while Liddell had partially recovered. Without his energetic movement, Mezger was in considerable danger. Liddell landed a blistering right cross 15 seconds in, then connected with a short overhand right that had Mezger hurt. Mezger was now on the ropes, but had a moment to catch his bearings. He then made the big mistake of dodging a punch by ducking with his eyes looking down at the floor, something boxers are taught never to do. The reason is made immediately obvious, as Liddell responded with a right uppercut. It caught Mezger hard on the body and caused him to raise his chin, where Liddell finished matters with a spectacular, fast and powerful right cross that had his foe's eyes rolling around his head, utterly unconscious on the floor, with his left leg folded awkwardly underneath him: a brutal, sensational knockout.

Not only does that fight showcase many impressive traits of both combatants—Mezger's highly impressive striking and movement; Liddell's toughness, heart, chin, and monstrously powerful right hand—but it's simply a great showdown in its own right. I strongly urge every MMA fan to check it out.
« Previous Forgotten Fights of Yesteryear: Matt Serra vs. Din Thomas Next Forgotten Fights of Yesteryear: One of the Greatest UFC Matches Ever »