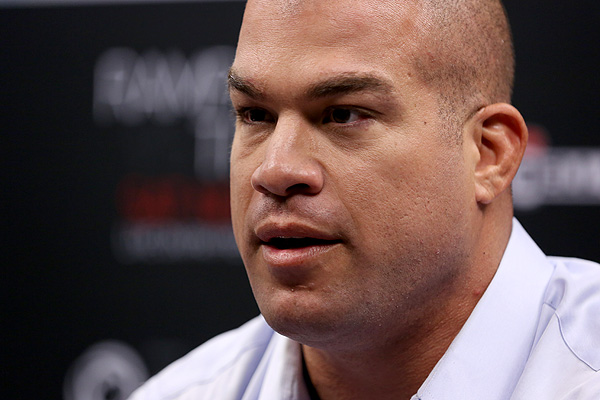 Tito Ortiz will make his Bellator debut on May 17. | Photo: Dave Mandel/Sherdog.com


One legend is currently a television pitchman delivering punchlines. The other legend is disdainfully looked upon by hardcore MMA fans as a punchline. They are Chuck Liddell and Tito Ortiz.

Mention those names in the same sentence to old-school mixed martial arts fans, and they probably have a good memory of UFC 47. Remember that pay-per-view? It sold 100,000 buys. Their rematch a couple of years later sold one million PPV buys.

It is no wonder that Viacom executives with fond memories of promoting past Ultimate Fighting Championship events would jump at the chance to build Bellator MMA’s PPV launch around someone like Ortiz. They booked him in a fight against Quinton Jackson in November and even carried over the promotion of the bout to the TNA pro-wrestling property on Spike TV. Unfortunately, right on cue, Ortiz was forced to back out of the match with an injury, and the pay-per-view became a Spike TV special instead.

Now, Ortiz is back for Bellator’s do-over PPV launch, this time facing the difficult challenge of confronting the predatory fighting style of middleweight champion Alexander Shlemenko. Instead of receiving credit for accepting the task of fighting one of Bellator’s most dangerous fighters, many hardcore fans are too busy snickering and lamenting on what could be a spectacle on May 17 at the Landers Center in Southaven, Miss.

American sports fans love to build up stars and tear them down, especially in MMA. One minute you are a goat, and the next minute you are the Greatest of All-Time; and nobody seems to have a problem telling fighters when they should retire. Whether it was Mark Coleman, Don Frye, Randy Couture or Kazushi Sakuraba, there was always a mixture of anticipation and self-pity. With Ortiz, however, there seems to be no sort of pity or empathy amongst many MMA fans. Ask your average veteran MMA fan about him and you will hear a variation of the following: He is a clown. He is not a guy to be taken seriously. He was just a character in the rise of the UFC and happened to be at the right place at the right time. He was all talk and no substance. 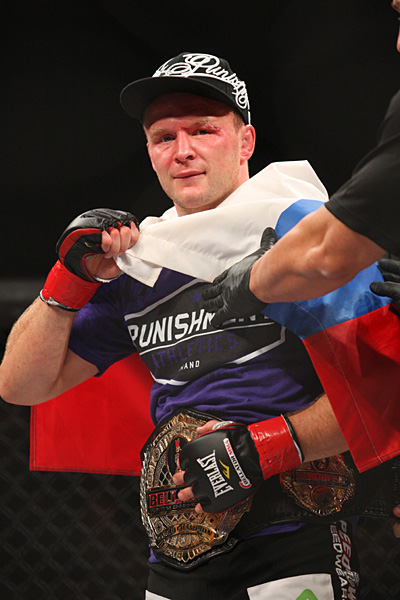 Photo:
Shlemenko will move up in weight.
How did we get to a point where television executives for one of the most powerful media companies around, Viacom, decided to go with Ortiz in 2014 when everyone else is busy dumping all over him?

Remember the ill-fated Spike TV special built around a supposed boxing match between Oritz and Dana White, Ortiz’s ex-manager? It played into the worst instincts of all parties involved. In the end, it may have been worth it for the UFC. When White was busy promoting his boxing reality show, “The Fighters,” in January, he could not help bringing up the sordid boxing stunt with Ortiz and claimed once again he could beat up the former UFC champion in a boxing match.

Then there was the whole saga with Jenna Jameson, which resulted in police intervention and reached an ugly apex on Twitter, with pictures alleging or implicating possible drug use. Ortiz ended up losing his house. Next came the DUI arrest. In addition, Ortiz will be front and center in a defamation trial this summer, when he will be a defendant against former trainer and manager Juanito Ibarra.

Ortiz has given his critics plenty of ammunition with which to destroy his character and parody his track record as a fighter. However, the ridicule has gone overboard. When one looks at Ortiz’s resume over the last seven years, he has shown a willingness to fight some very tough opponents, with high risk for potential humiliation; and for that, Ortiz gets mocked the same way people mock Lindsay Lohan and Tara Reid in pop culture circles.

Now 39, Ortiz has a chance to temporarily silence his many vocal critics by pulling off a major upset against Shlemenko. His win against Ryan Bader at UFC 132 bought him time and money. Against Shlemenko, Ortiz is facing a man whose style is suited for delivering vicious technical knockout wins with body blows; and if there is one opponent who is vulnerable to Shlemenko’s propensity for violence, it is Ortiz. His TKO losses to Rashad Evans and Antonio Rogerio Nogueira resulted from body shots, so there is a real possibility that Ortiz could lose and lose badly. Unfortunately for him, I do not expect fans to give him much credit for taking on a legitimate opponent, even if Shlemenko is moving up in weight to fight him.

In the aftermath of Ortiz-Liddell 2 at UFC 66 in December 2006, it was amazing to see how differently fans respected and admired Liddell for his accomplishments while convulsing at the continued existence of one of the icons that helped build the UFC into the monster company we see today. After the explosive rematch that drew one million pay-per-view buys, both men found themselves in a wilderness of defeat. Liddell lost five out of his last six fights in destructive fashion; Ortiz has had one win in the last seven years; and yet, the reputations of both men and the respect fans have shown for their past accomplishments could not be more different.

MMA fans love to romanticize many of the veterans that paved the way to where we are today, from Wanderlei Silva and Antonio Rodrigo Nogueira to Mirko Filipovic and Mauricio Rua. We still watch these guys fight and get excited about the possibility of seeing an unpredictable moment in the cage. However, with Ortiz, there is no concern about how much he has left in the tank as a fighter. He has morphed into an Andy Kaufman-esque pro-wrestling character that fight fans want to see vanish while getting humiliated and degraded in the process. He is a supposed con artist that never came through in the clutch or wanted to fight real men.

If Bellator cannot convince you to buy its pay-per-view to watch Ortiz as a serious threat to Shlemenko, I reckon the company will settle for you paying your money to witness perhaps his final act in the cage.