Martin Kampmann played the role of spoiler to perfection.

The well-rounded Dane welcomed former World Extreme Cagefighting champion and world-ranked welterweight Carlos Condit into the Octagon in the UFC Fight Night 18 main event on Wednesday and slipped away with a split decision victory at the Sommet Center in Nashville, Tenn. Scores were 29-28 from all three judges, two of them siding with Kampmann.

Kampmann (15-2) almost ended the match quickly, as he locked up a guillotine choke in the first round. The submission savvy Condit, however, kept his lower body mobile and twisted free.

“It was deep,” Kampmann said. “I thought I had it, but Carlos is really tough.”

Condit (22-5) opened a cut below Kampmann’s left eye with a standing punch on the grounded Xtreme Couture welterweight late in the first round and followed up with a powerful knee against the cage. Kampmann kept coming, even under duress. Condit finished strong with a head kick and flying knee in the final 30 seconds and gained a foothold in the match.

The 24-year-old Condit threatened Kampmann with a rear-naked choke in round two, but whatever momentum he attained was soon lost. Kampmann scored with a takedown inside the first minute of the third round and kept Condit on his back and on the defensive for several minutes. A steady stream of ground-and-pound ensued, and Condit was all but shut out of the round until he cinched a guillotine choke of his own in the final seconds. Even so, Kampmann had left his stamp on the fight.

“That was a war,” Kampmann said after he snapped Condit’s eight-fight winning streak. “He’s a true warrior.”

The Ryan Bader-Carmelo Marrero co-featured bout was not nearly as competitive.

Bader -- in his first appearance since becoming the latest light heavyweight tournament winner on “The Ultimate Fighter” -- dominated and thoroughly outclassed the American Top Team representative and coasted to a unanimous decision, 30-27 on all three scorecards.

A product of the Arizona Combat Sports camp, Bader took down Marrero repeatedly and nearly finished him with an armbar in the first round.

From there, he suffocated Marrero (10-3, 1 NC) with paralyzing top control. He mounted the former heavyweight twice, threatened him later with an arm-triangle choke and punished him with short punches and elbows. A two-time All-American wrestler and three-time Pac-10 Conference champion at Arizona State University, Bader (9-0) never allowed Marrero to settle into the fight.

Still, he sees room to improve. 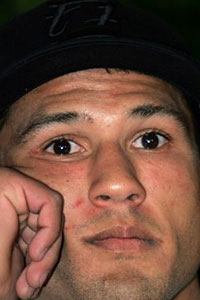 File Photo
Tyson Griffin got back
in the win column.
Meanwhile, lightweight contender Tyson Griffin outpointed Brazilian Rafael dos Anjos in a fight that was far more competitive than the scorecards indicated. All three judges scored it 30-27 in Griffin’s favor.

Brutally knocked out by Jeremy Stephens in his UFC debut five months ago, dos Anjos trapped Griffin in a first-round calf slicer and bent the Californian’s leg awkwardly behind him. The 24-year-old Griffin (13-2) -- who stunned dos Anjos with a right hand prior to the leg lock -- was noticeably hobbled when the two men returned to their feet and struggled to put meaningful offense together throughout the remainder of the round.

“He definitely stretched the muscles in there,” Griffin said. “It definitely slowed me down for a few seconds after I got up. Luckily, nothing popped in there. I know how to deal with that pain.”

Though he was wobbled by a straight left hand early in the second period, Griffin controlled much of the rest of the match with crisp boxing and cage control. He kept dos Anjos (11-4) on his heels with his hands and a steady diet of inside leg kicks.

“I want to beat my opponent where they’re the weakest,” Griffin said. “I thought his strength was on the ground, so I wanted to keep it standing.”

Griffin brought the Brazilian back to the ground near the end of round three and was promptly greeted by a kimura. The Xtreme Couture lightweight escaped, however, and finished strong with some textbook ground-and-pound.

Miller (15-3) stung Browning with a straight right hand, lured his opponent into the clinch and cinched a tight guillotine choke when the inexperienced Xtreme Couture representative moved in for a takedown. Browning (3-1) struggled briefly but decided discretion was the better part of valor and waved the white flag. The tapout came 1:58 into round one and ended a bitter war of words between the two lightweights.

“I cracked him with that right hand,” said Miller, his Brazilian jiu-jitsu brown belt hanging proudly from his neck. “I knew as soon as he felt my power, he was going to try and take me down. That’s just the inexperience factor.”
Click here to read Sherdog.com's preliminary report.