The talent gap between Ricardo Almeida and Matt Horwich proved as significant as many had feared.

Almeida (10-3) cruised to a unanimous decision against the accomplished Team Quest veteran at UFC Fight Night 18 on Wednesday at the Sommet Center in Nashville, Tenn. All three judges sided with Almeida by matching 30-27 scores in a bout where the outcome seemed almost inevitable.

A former middleweight King of Pancrase, Almeida dominated Horwich with takedowns and top control, as he grounded him at will. The Brazilian jiu-jitsu black belt put Horwich on his back in every round and threatened him with a guillotine choke in the first. The one-time International Fight League champion spent much of his time and energy scrambling back to his feet, only to be taken down again by Almeida.

Horwich (22-12-1) has yet to taste victory inside the Octagon and has dropped three of his past four bouts overall, including two straight. Almeida has won eight of nine dating back to a November 2002 Pancrase appearance.

A catchweight match between Gleison Tibau and Jeremy Stephens -- neither man met the lightweight threshold of 156 pounds at Tuesday’s weigh-in -- was equally lopsided.

One of the world’s largest lightweights, the 25-year-old Tibau (17-6) controlled Stephens and his thunderous hands with superior wrestling and grappling and coasted to a unanimous verdict on the scorecards. Two of the cage-side judges scored the bout 30-27 for the American Top Team representative; a third scored it 29-28.

Tibau mounted Stephens (14-5) in the first round and nearly submitted him with an arm-triangle choke in the second. The high-octane Iowan, neutralized for much of the match, had his moments in round three, including a pair of jumping knees from the clinch. Still, he could not fully corral Tibau, who finished the fight with another takedown and put an exclamation point on the victory. 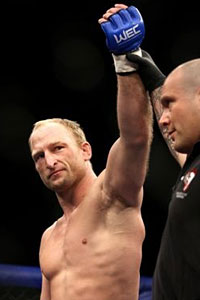 The rugged 31-year-old Minnesotan dragged Jesse Sanders to the mat, transitioned to back mount and carved up the Extreme Challenge veteran with strikes from behind. Battered and bleeding, Sanders succumbed to a rear-naked choke 2:01 into the match.

“It’s good to be back,” said Larson, who made his first UFC appearance since he defeated Keita Nakamura in December 2006. “I wanted to make a statement. You’ll see more of me, I promise.”

Larson (25-2), a product of the Minnesota Martial Arts Academy, has posted 13 wins in 14 fights. Seventeen of his 25 career victories have come by submission.

Meanwhile, “The Ultimate Fighter 7” alumnus and Brazilian jiu-jitsu black belt Tim Credeur maintained his recent momentum, as he submitted the previously unbeaten Nick Catone with a second-round guillotine choke. The tapout came 3:45 into round two.

Credeur (12-2) -- who threatened from his back for much of the fight -- appeared to close the deal with an armbar in the first period, but the match was allowed to continue. A former Ring of Combat champion, the 27-year-old Catone (6-1) took down Credeur often and even passed the superior grappler’s guard, but he made little headway in terms of damage.

As Catone shot in for another takedown in the back half of round two, Credeur capitalized, cinched the choke and posted his sixth win in a row.

Elsewhere, heavy-handed veteran Jorge Rivera notched his first win in nearly 15 months, as he pulled out a split decision against Nissen Osterneck. Scores were 29-28 from all three judges, two of them favoring Rivera.

Rivera (16-7) seized control of the competitive bout during the final 10 minutes and dropped Osterneck with a stiff right hand in the second round. Though the 37-year-old failed to finish, the knockdown marked a turning point in the action. Sporting a mouse under his right eye, the Hawaiian-born Osterneck (5-2) fought admirably in round three but could not do enough to sway the judges and suffered his second defeat in as many appearances.

In another middleweight tilt, Rob Kimmons made his play for the “Submission of the Night” bonus, as he left Joe Vedepo unconscious with a standing guillotine choke.

The two men set a frenetic pace, but Kimmons (22-4) caught Vedepo on a takedown attempt and made him pay for his carelessness. He locked in the choke on his exposed neck, flashed a smile and nodded to his corner, signaling the end was near. Vedepo (7-3) went limp 1:54 into the opening period, as the 28-year-old Kimmons won for the fifth time in six fights.

A two-time All-American wrestler and Pac-10 Conference champion at Arizona State University, the unbeaten Simpson (5-0) weathered an early barrage from McKenzie and took down the eccentric Californian with ease. McKenzie (12-6) rose to a standing position but walked into a buzzsaw, as Simpson throttled him with punches and forced referee Mario Yamasaki to intervene 1:40 into the match.

Based out of the Arizona Combat Sports camp, Simpson has finished four of his first five fights as a professional inside the first round.