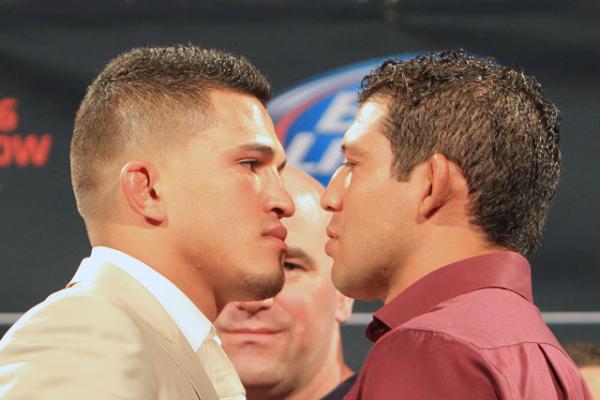 
Anthony Pettis captured the Ultimate Fighting Championship lightweight crown some 15 months ago. He will defend it for the first time on Saturday, when he faces Gilbert Melendez in the UFC 181 co-main event at the Mandalay Bay Events Center in Las Vegas.

Injuries and a coaching stint opposite Melendez on Season 20 of “The Ultimate Fighter” have kept Pettis on the sidelines since he submitted Benson Henderson with a first-round armbar at UFC 164 on Aug. 31, 2013. The 27-year-old Roufusport export will carry a four-fight winning streak into his first title defense. Melendez, meanwhile, last competed at UFC 166 in October 2013, when he took a unanimous decision from Diego Sanchez in a memorable scrap at the Toyota Center in Houston. The 32-year-old Cesar Gracie protégé has rattled off eight wins in his past nine appearances, a disputed decision loss to Henderson the only misstep.

Sherdog.com touched base with a number of professional fighters and trainers to gauge their opinions on the UFC 181 headliner:


Nam Phan: Melendez will win. He’s going to grind him out for sure.

Ray Elbe: Pettis will be better from the outside, but I think Melendez tries to keep this at a high speed, with constant pressure mixed with takedown attempts. Melendez will be champion, and I think with a win, Josh Thomson is back in the hunt. Fights one and two [between them] deserve a trilogy with the UFC’s marketing behind it. Those last two fights were legendary.

Chris Clements: Picking Melendez to win this one. Pettis is the more technical and athletic fighter but needs time and space to set up his combos and fancy strikes. Melendez has the perfect in-your-face aggressive style to shut down a lot of the offense of Pettis and grind out the win.

J.J. Ambrose: Watching Melendez over the years has been nothing short of inspiring. He’s a grinder, never quits and is tough as hell. As a fighter, you root for him to win. I know Pettis is on another level -- I’m not taking anything away from him -- but as a fan of Melendez, let’s go “El Nino.”

Joe Duarte: I think Melendez might pull this one off.

Ricardo Liborio: As much I really like Melendez’s style, Pettis’ striking may be too much for him. 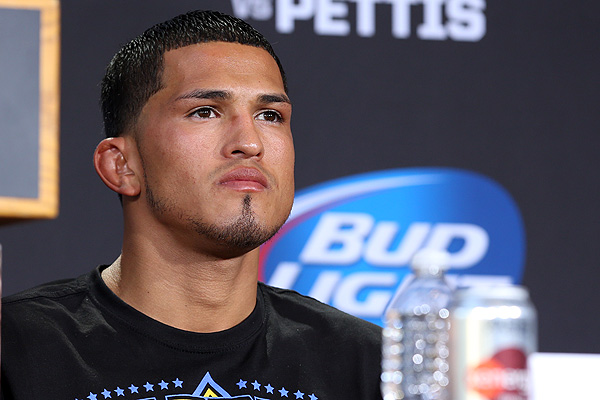 Jason Dent: I’m going with the upset here and picking Melendez. The guy seems like a tank that moves forward and never messes around. The only way Pettis wins this one is if he can keep his distance and pick Melendez apart in the first few rounds.

Benji Radach: I’ve got to pull for Melendez. He wins by ruggedness.

Charles Rosa: My heart says Melendez because he fights with his heart, but as far as technique and talent is concerned, I say Pettis. It’s really hard for me to pick one over the other, but coming off an injury and with Pettis being out so long, I’m going with Melendez. Gilbert is really hungry; he wants that belt. I’ll take Melendez for the win, but I think Pettis is a little bit more skilled.

Roger Narvaez: I’m going with Pettis. Melendez is a killer and I don’t see either guy finishing this fight, but I think Pettis will be technically too much.

Wilson Reis: I’ve got Pettis wining via knockout in the third round with a flow of striking and ground-and-pound.

Beneil Dariush: I think Pettis is the favorite -- and rightfully so. He has more weapons, but Melendez is a serious threat. I think it’s all going to come down to how comfortable Pettis will be after his long layoff. I’m favoring Pettis.

Tom DeBlass: Melendez wins by decision. He out-grinds him, but Pettis is a beast.

Colton Smith: This is a very intriguing fight. Pettis has been plagued with injuries and Melendez is apt to make any fight competitive. With that said, Gilbert has had an issue of fighting down or up to his opponents’ levels. In this fight, the neutralizer will be Melendez’s ability to finally close the distance, put Pettis on the fence and score the occasional takedown. I see the former Strikeforce champion squeaking out a split decision and becoming the new UFC lightweight champion of the world.

John Gunderson: I’m going with Pettis. I think Melendez is a beast and a great fighter, but Pettis is a different type of athlete than the other 155ers. His transitions and ability to switch his standup is a beauty to watch. His fight with Donald Cerrone was a testament to that. Nobody in the division can stand with this guy.

Fredson Paixao: I think Pettis wins because he has more dimensions to his game.