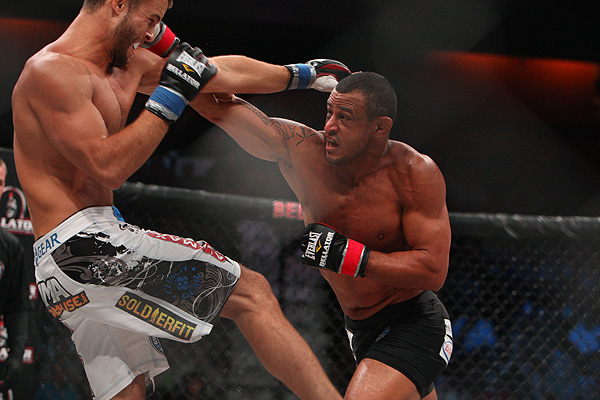 Few have entered Bellator Fighting Championships with more substantive hype than Marlon Sandro, as expectations tend to skyrocket when opponents start leaving the ring on stretchers.

A former Sengoku champion and reigning featherweight King of Pancrase, Sandro has yet to unveil the potent standup skills stateside that had him on the doorstep to superstardom. Two fights removed from his knockout loss to Pat Curran -- a defeat that cost him a crack at Bellator gold -- the 35-year-old Nova Uniao export will meet Roberto Vargas in the quarterfinal round of the BFC Season 6 featherweight tournament at Bellator 60 on Friday at The Venue at Horseshoe Casino in Hammond, Ind.

Sandro senses validation is within his reach.

“Winning this tournament is extremely important for my career right now,” he told Sherdog.com. “Last time, I came so close, but now it’s my turn.”

Sandro (20-3, 3-1 BFC) last fought at Bellator 58 in November, when he submitted American Top Team’s Rafael Dias with a first-round arm-triangle choke at the Seminole Hard Rock Hotel and Casino in Hollywood, Fla. Dias, a Brazilian jiu-jitsu black belt and WEC veteran, had never before been submitted. It was Sandro’s first stoppage victory since his ruthless string of knockouts against Yuji Hoshino, Tomonari Kanomata and Masanori Kanehara in Japan -- an unexpected turn for a fighter who once scored three sub 40-second KOs in one five-fight span.

Against Vargas, Sandro wants to rekindle that killer instinct for an American audience that places a premium on the ability to finish one’s foe. Roberto Vargas File Photo
Vargas is 12-1.
“When fans are done watching this fight between me and Roberto, I want them to think, ‘Man, that was incredible,’” said Sandro, a teammate of reigning UFC featherweight champion and pound-for-pound ace Jose Aldo. “I think we’re both going to provide a lot of action for the fans, and that’s going to make for a great fight. I can’t predict how the fight will end, but I can say that I will do my best to submit Roberto.”

That will be no easy task. In 13 professional appearances, Vargas has never been knocked out or submitted. He suffered his only career defeat at Bellator 10 in July 2009, when he came out on the wrong side of a split decision against former EliteXC bantamweight champion Wilson Reis.

“I have a lot of respect for Roberto,” Sandro said. “He’s a good fighter with a nice record. He’s also very well-rounded, which means I have to be prepared for anything. This should make for a very exciting fight.”

Vargas will carry a career-best streak of six consecutive wins into the cage, as he returns to Bellator for the first time in nearly three years. The Millennia MMA representative last competed under the Shark Fights banner in October, when he defeated Jared Downing by split decision at the Edgewater Casino Resort in Laughlin, Nev. Vargas has delivered more than half (seven) of his 12 professional victories by knockout, technical knockout or submission. Sandro believes he has a decided edge over the 5-foot-6 Californian in two specific areas.

“I feel like my jiu-jitsu and my stamina are going to be my biggest advantages,” he said. “I truly believe that my stamina is going to be crucial in this fight.”

Vargas (12-1, 1-1 BFC) made his promotional debut at Bellator 6 in May 2009, when he defeated former two-division Legacy Fighting Championship titleholder Daniel Pineda by unanimous decision. Pineda has since moved on to the UFC, where he owns a 2-0 mark. Sandro welcomes the challenge from someone with a proven track record.

“I just want Roberto to train hard and come very prepared for this fight, because I will be very prepared,” he said. “I want the best out of him.”

At 35 and with the featherweight talent pool deepening, Sandro knows he can ill afford another misstep inside the Bellator cage. He views the bout with Vargas, in particular, and the Season 6 tournament, in general, as a golden opportunity to validate the hype that accompanied his arrival.

“I want to come out in this fight with Roberto and show everybody why I am here -- to be a champion,” said Sandro, a pre-tournament favorite who will enter the eight-man draw on the strength of six wins in his past eight outings. “I want to make a statement in this fight that not only am I one of the best fighters in the world at my weight but also that I deserve to be a champion.”