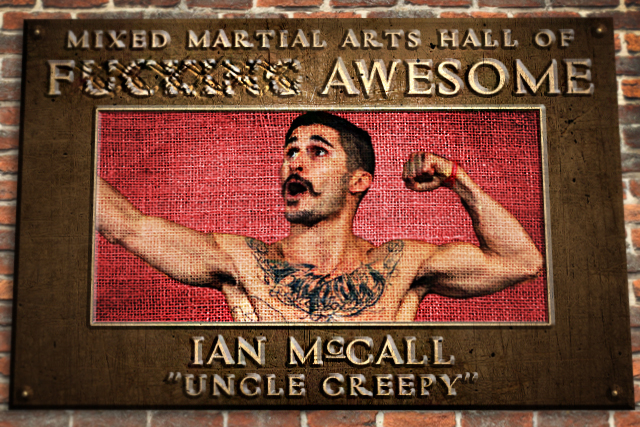 THE PITCH: For fans who were there during his heyday, the mention of McCall’s name instantly conjures up images and associations in the mind. Many of those associations are likely related to style rather than substance: the ebullient personality, the scripty “Capulet” chest tattoo, the silly but organic nickname -- and, of course, the trademark mustache. Those elements are all essential to understanding McCall, but it would be a shame to stop there, as they are less than half the story. McCall backed up his oversized image with an equally oversized list of achievements and what’s more, left the impression that if not for a combination of poor timing, poor choices and just plain bad luck, he might have accomplished even greater things.

Perhaps it's worth it to touch briefly on those poor choices -- not to dwell on them, but simply because it is impossible to tell the story of McCall's career without mentioning the thread of personal tragedy that winds through the fabric of his professional journey and is inseparable from it. Coming from a fairly privileged background in Orange County, California, but one steeped in drugs and violence nonetheless, McCall admits his early development as a fighter was hampered by his extracurricular pursuits. Tragedy hung over him like a cloud; several years before his own rise to prominence as a fighter, his world was devastated by the deaths of close friends Justin and Sara Levens in an apparent murder-suicide, and again in 2014 by the drug-related death of his friend, roommate and fellow UFC fighter Shane del Rosario. McCall himself left the sport for nearly two years in what should have been his prime, after a near-fatal overdose.

Ironically, it was only after that hiatus that McCall truly broke through as a top contender. In 2009, before his overdose, he had been an up-and-coming bantamweight prospect who seemed to have hit his ceiling in World Extreme Cagefighting, being splattered by the burly, more experienced Charlie Valencia and definitively outclassed by Dominick Cruz. When he came back in 2011, he took a final one-off bout at bantamweight, then dropped to 125 pounds. In his flyweight debut, one fight back from a lengthy layoff and two years removed from a near-death experience, McCall took on the consensus best fighter in the world in his new division -- and beat him decisively.

That victory, over Jussier Formiga at Tachi Palace Fights 8 in February 2011, served notice that there was a new de facto king at 125 pounds. Even the manner in which McCall won seemed to imply he would be a force to be reckoned with for a long time to come; Formiga took McCall’s back early in Round 1, normally a death sentence from one of mixed martial arts’ all-time great back control specialists. McCall survived the round, then spent the next two rounds tuning up the Brazilian on the feet, denying his takedown attempts and leaving Formiga exhausted, resorting to pulling guard and attempting low-percentage leglocks.

After two more fights at the Tachi Palace, McCall was invited to help usher in the Ultimate Fighting Championship’s flyweight division as one-fourth of a mini-tournament to crown an inaugural 125-pound champion. Matched up with future pound-for-pound stalwart Demetrious Johnson at UFC on FX 2 in Sydney, Australia, McCall was the victim of one of the worst robberies in the history of the sport. More on that later.

After the “Sydney Screwjob” and a controversy-free loss to Johnson in the rematch, McCall spent the next five years as a Top-10 fighter and magnetic personality even as his health -- and that of his opponents -- betrayed him with a frequency that would be funny if it weren’t so pitiful. He set the kinds of UFC records nobody wants to set, in such categories as “Most Consecutive Bouts Canceled Due To Injury, Illness or Failed Weight Cut by Either Fighter” (six) and “Most Career Bouts Canceled during Fight Week” (four). On the occasions that McCall and his foe both managed to make it to the scale and the cage without mishap, he looked less and less like his old fiery self. Moments of fleeting brilliance were interspersed with grim displays of heart and grit. On the one hand, it was better than nothing from a guy who freely admits he should have died in his early twenties, but on the other hand it was sad.

McCall retired in May 2018, after a brutal knockout loss to Kyoji Horiguchi in Rizin FF. He left behind an inimitable legacy; a unique blend of charisma, straightforward achievement and a haunting amount of unrealized potential.

SIGNATURE MOMENTS: To fully explore the chicanery of McCall’s “loss” to Johnson in Sydney would be its own full-length article, but the short version is that McCall was denied a draw that would have sent his bout with Demetrious Johnson to a fourth, tie-breaking round, because of an arithmetic error on the part of the Australian Athletic Commission. The mistake made what was in fact a majority draw appear to be a split decision victory for Johnson. The gaffe was discovered that same evening, but the result could not simply be overturned; as a tournament semifinal, the fight needed someone to advance. By the time the error was noticed, it was far too late to bring Johnson and McCall back to the cage. Worst of all, while nobody can say with certainty how a fourth round would have gone, McCall had absolutely walloped Johnson in the third and was boxing the ears of a flattened “Mighty Mouse” from back mount at the final horn. He had all the momentum.

The two met in a rematch a few months later. Johnson won a unanimous decision in a fight that was competitive but offered little suspense. There is no shame there; even at McCall’s best, Johnson was the greater and more historically accomplished fighter. That only amplifies the injustice of the whole situation, though, because it means that the banal stupidity of the commission robbed McCall of what might have been the crowning achievement of his career, the night he took it to one of the greatest fighters of all time. For the next six years, nobody else would even come close to defeating Johnson. In its heartbreaking blend of competitive greatness and cosmic senselessness, it is the most perfectly Ian McCall thing that could have happened.

THE HOFA COMMITTEE SAYS: “Uncle Creepy” has been on the committee’s watch list from the moment he announced his retirement last May, and was voted in as soon as he became eligible, a year from that date -- an easy first-ballot selection. His impressive yet star-crossed career makes him the epitome of a fighter whose story cannot be told by a cut-and-dried list of achievements. For as long as the HOFA claims to welcome pioneers and charming oddballs, there will always be a place of honor for the McCalls of the sport.