UFC 140 “Jones vs. Machida” marks both the promotion’s second event in December and its second event in the city of Toronto. Though scaled back in size from the Ultimate Fighting Championship’s inaugural Ontarian effort in April, UFC 140 still packs a punch in terms of name value on the main card.

Going down from the Air Canada Centre on Saturday, the show also sports an undercard with plenty to offer the casual and hardcore fan alike. Here are five reasons to care about the UFC 140 preliminary draw.

If you were unaware, John Cholish is someone to watch at 155 pounds.

Though he undoubtedly possesses a great deal of natural athleticism, the Cornell University graduate’s scientific approach in his training may be what sets him apart from the pack. Observing many of the sport’s current greats in an effort to improve his own game, the fighter drills maneuvers to an obsessive degree under the tutelage of grappling guru John Danaher.

An energy broker by day, Cholish spends many evenings watching tape, even filming himself while training so that he can point out his mistakes later. While that level of preparation might seem excessive to many, it has paid off for the New Jersey native, who has not lost since his 2007 debut.

At this point, it is unknown if Cholish will be able to translate his considerable talents -- see: rolling kneebar finish of Marc Stevens -- into Octagon wins. The Ivy League grad begins his UFC journey against Mitch Clarke. How long it lasts will be up to him.

Just as Cholish’s kneebar against Stevens was an instant jaw-dropper, so too was John Makdessi’s spinning back fist knockout of Kyle Watson at UFC 129. “The Bull” possesses a varied and powerful striking attack not commonly seen in MMA.

The undefeated Canadian has looked like a world-beater through his two-fight UFC stint thus far, but neither Pat Audinwood nor Watson have possessed the type of standup and wrestling skills required to make Makdessi hesitate in throwing many of his flashier techniques. Veteran Dennis Hallman should provide the young buck with a stiffer test, though Hallman’s status as a lightweight is also a massive question mark. 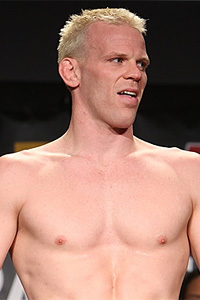 Dennis Hallman File Photo
Hallman is a serious threat on the floor.
A 15-year veteran of the sport, Hallman faces plenty of uncertainty ahead of his showdown with Makdessi. A welterweight staple, the submission specialist makes his first appearance at 155 pounds since unsuccessfully challenging for Jens Pulver’s UFC title in 2000.

After being diagnosed with Coeliac disease in 2010 and altering his diet to cut out gluten, Hallman put forth a pair of excellent performances, outpointing Ben Saunders at UFC 117 before knocking out Karo Parisyan three months later at UFC 123. The 36-year-old seemed poised to potentially make some noise at 170 pounds, but fellow veteran Brian Ebersole put an end to that thought in August by knocking Hallman senseless with brutal ground-and-pound at UFC 133.

His health now apparently no longer an issue, Hallman stands in front of a fresh opportunity at lightweight. Will the 67-fight veteran take a successful first step at 155 pounds, or will he find himself on the painful end of Makdessi’s considerable standup arsenal?

In all likelihood, Yves Jabouin’s bantamweight clash with Walel Watson will be an Animal Planet-themed smashup.

While not particularly important to the 135-pound pecking order, the bout might just challenge for “Fight of the Night.” Two bantamweights who have no problem throwing early and often? It is going to be popcorn-munching material, simple as that.

Anyone familiar with Jabouin’s 2010 WEC clash with Mark Hominick knows what “Tiger” can do in the right setting. Fresh off of a dominating victory over Joseph Sandoval in his UFC debut, Watson should complement the Canadian’s style perfectly.

Conversely, Watson is still a relative wild card in the division, and Jabouin should represent an excellent test to see if “The Gazelle” is ready to strike with some of the baddest boys in the division. Of course, his ground game probably will not be tested in this fight unless he slips and falls, but this is a detail best ignored at the moment. Just sit back and enjoy the bang-bang.

Jared Hamman may have found his sweet spot at middleweight.

A deceptively good athlete, the former NCAA Div. III defensive end fought through his ups and downs as a light heavyweight in the Octagon before shedding the extra 20 pounds and making his middleweight debut against “The Ultimate Fighter” Season 7 finalist C.B. Dollaway at UFC Live 5.

Known for his ability to take a shot, Hamman put that ability to good use against “The Doberman,” weathering an early storm from Dollaway and turning up the heat in round two en route to a technical knockout finish. Already somewhat lanky as a 205-pound competitor, the 6-foot-3 Hamman may now make full use of his frame in his new division.

Standing before him at UFC 140 is Cyprus native Constantinos Philippou, who enters the cage after squeaking by Jorge Rivera in August. His light heavyweight aspirations now likely exhausted, can Hamman take care of business and make a move toward middleweight relevance?