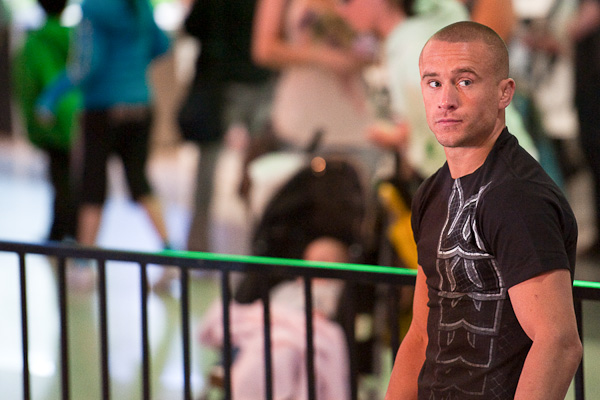 If Mark Hominick wanted to use an excuse for his seven-second knockout loss to Chan Sung Jung at UFC 140, he’d have a good one.

Shawn Tompkins -- Hominick’s longtime trainer, friend and mentor -- died of a heart attack in the months before the bout. But that didn’t cause the defeat, said Hominick.

Hominick entered the Dec. 10 fight on the heels of a gutsy showing in April against Jose Aldo. He had gone 25 minutes with the UFC featherweight champion, but only made it a few seconds against Jung. It may not have helped that Hominick was fighting in Toronto -- just a couple of hours from his hometown.

“It was a pretty tough loss,” he said. “I was in very good shape, had a good mindset, but again, I came out so aggressively and just out of character.”

It was a performance issue, not a lack of preparation. Hominick explained that Tompkins’ death had actually inspired his training camp for the fight.

“Honestly, it motivated me throughout the camp, just knowing that I wanted to get in there and prove that we’re going to carry on his legacy and we’re going to carry on his name by fighting and winning,” Hominick said. “It motivated me throughout the camp, but again, I came out out of character. Maybe if Shawn was there, he would have slapped me straight, but it is what it is. It was a tough loss, but I didn’t sit and dwell on it too much. The way you get rid of that is you come out there and you win. That’s what I’m focused on doing.”

Hominick will try to bounce back April 21 when he takes on Eddie Yagin at UFC 145.

“He always comes to fight, and that’s what I like,” Hominick said of his opponent. “I like guys that get in your face and want to throw down. … He’s got a cannon for a right hand. That’s one thing. He’s got a good guillotine. He’s a well-rounded fighter and he’s been around.”

In preparation for the match, Hominick has been training with veteran fighter and coach Jeff Curran. They’re old friends -- Curran has cornered Hominick before -- but in Tompkins’ absence, Curran’s presence is even more crucial.

“Jeff’s been involved with MMA to the core for a long time,” Hominick said. “He’s had almost a 15-year career. He’s had 50 fights and he’s got that experience and he’s also on the mat with you every day. It’s nice. I have a lot of confidence. I think that’s a big thing, is just being confident in your coach and in your corner. That’s one thing I always had with Shawn and that’s one thing I have with Jeff as well.”

Hominick hopes that confidence will translate into a victory over Yagin, who lost his UFC debut against Junior Assuncao in September. It’s a fight Hominick needs to win to avoid a three-bout losing streak.

“I think in the UFC every fight’s a must-win,” he said. “That’s how important the fights are and how much pressure the fighters have on them. But I’m so far removed from thinking, ‘Oh, this puts me here or there.’ I’m thinking about going out there and winning. That’s it. I think what got me to the title shot with Aldo was just that.”