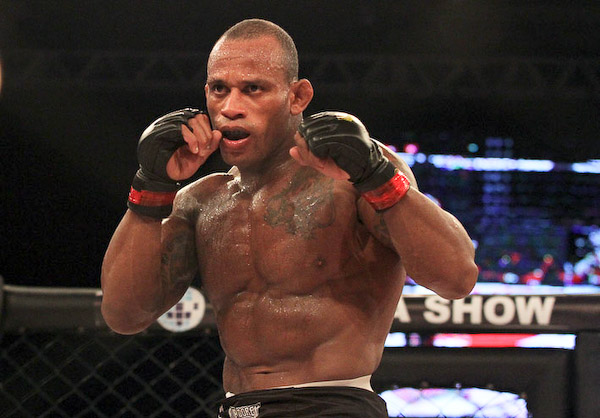 Thanks to a logistics conflict with the United Nations Conference on Sustainable Development, the event was transplanted from the massive Joao Havelange Stadium in Rio de Janeiro, Brazil, to the much smaller “Mineirinho” in Belo Horizonte, Minas Gerais. Along with the original venue, the show also lost its main event, as the anticipated middleweight title rematch between Anderson Silva and Chael Sonnen was rescheduled for UFC 148 in Las Vegas.

Even the co-main event was not to be, as a broken hand forced Vitor Belfort to withdraw from his long-awaited rematch with fellow “The Ultimate Fighter: Brazil” coach Wanderlei Silva. Instead, “The Axe Murderer” will square off with another former foe in ex-middleweight champion Rich Franklin in the new UFC 147 headliner.

Belfort’s injury may have spoiled his clash with Silva, but their “Ultimate Fighter” proteges will still have the opportunity to get down during both the main and preliminary draws, even if the show's middleweight final was also ruined after Daniel Sarafian withdrew with an arm injury. One may not recognize the names on the undercard, but among the fighters listed is a former Jungle Fight champion, an International Fight League vet and a pair of undefeated up-and-comers.

Here are five reasons to tune into FX and Facebook on Saturday to catch the UFC 147 “Silva vs. Franklin 2” prelims:


Francisco Drinaldo has already won the award for “Brazilian most likely to walk in Kenny Florian’s footsteps.” Now he is going after something “KenFlo” could not capture: an “Ultimate Fighter” crown.

Just like Florian in Season 1 of the reality series, Drinaldo finds himself competing at 185 pounds, miles above his natural weight class. Prior to joining the cast as a blown up middleweight, Drinaldo was regarded as one of Brazil’s premier prospects at 155 pounds, even capturing the Jungle Fight lightweight title in 2011. “Massaranduba” then knocked out Charles Maicon to earn his spot in “The Ultimate Fighter” house before falling in the quarterfinal round to Thiago de Oliveira Perpetuo.

Standing opposite “Massaranduba” at UFC 147 will be another man fighting outside his natural division in former Brazilian jiu-jitsu world champion Delson Heleno. A 10-time veteran of the defunct International Fight League, Heleno fought for the IFL welterweight championship in 2007 against Jay Hieron. Following his loss to “The Thoroughbred” and subsequent exit from the promotion, “Pe de Chumbo” won 10 of his next 11 before entering the house, where he, too, advanced to the quarterfinals.

Though this bout will technically be contested at middleweight, odds are good the UFC will receive two serviceable additions to its lightweight and welterweight divisions, regardless of the outcome.


A battle of undefeated featherweights should also entertain prior to the pay-per-view broadcast, as Hugo Viana faces John Teixeira da Conceicao.

Better known as Hugo “Wolverine,” Viana enters the cage as one of the season’s more popular competitors thanks to both his creative facial hair and his allegiance to UFC heavyweight champion Junior dos Santos’ team in Salvador, Bahia. The 29-year-old, who also holds a degree in physical therapy, has emerged victorious in each of his five pro contests, advancing to the show’s featherweight semis before seeing his winning streak snapped by finalist Rony Mariano Bezerra.

Meanwhile, John “Macapa” walks into the event with less fanfare but holds more than twice Viana’s professional experience. Racking up 13 victories on the Brazilian circuit, “Macapa” has finished his last four opponents, most recently choking out CM System representative Paulo Dinis in December at Amazon Fight 10.

Which unbeaten featherweight will keep his perfect record intact? Damm is clearly the more well known of the two competitors, despite owning fewer pro outings compared to his younger opponent. After stringing together eight consecutive wins and topping the likes of Kultar Gill, Johil de Oliveira and Jorge Masvidal, Damm has since lost four of his last five fights, including a brutal one-round beat down courtesy of Justin Wilcox in 2011. The 32-year-old former lightweight appeared to right his ship for his featherweight run on the show, besting Fabricio de Assis Costa da Silva and “Macapa” before withdrawing from the competition due to dehydration.

Though “Gasparzinho” has not beaten the same level of competition as his foe, the 24-year-old entered the reality show riding four wins in five fights. His qualifying victory over Rafael Bueno would prove to be his last of the season, however, as he found himself caught in a damaging armbar in his quarterfinal matchup with Bezerra.

Will Damm earn retribution for tolerating the season’s class clown, or will “Gasparzinho” show he is ready for a new level of competition?


Thiago de Oliveira Perpetuo may be beaten in the cage many more times before he retires, but it is a good bet that “Bodao” has already fought the toughest battle of his life. As a child, Perpetuo was diagnosed with a malignant tumor in his shoulder. After beating the odds and recovering from the affliction, the fighter racked up eight wins in his first 10 pro bouts before being selected for the reality show. Perpetuo fought his way to the semifinals, eventually catching a high kick from Cezar Ferreira that ended his run one fight shy of the finals.

Opposing “Bodao” will be Leonardo Mafra Texeira, also known as “Macarrao.” Teixeira owns just five outings to his credit but has yet to taste defeat, racking up three knockouts and two decision victories in just six months as a pro prior to joining the show’s middleweight bracket. Like his upcoming adversary, “Macarrao” was also eliminated by Ferreira, falling by submission to “Mutante” in the quarters.

Traditionally known as one of the thinnest weight divisions in the UFC, the middleweight ranks are seemingly always ready to receive a new addition to stir the pot. Which man will prove he belongs on the big stage?


Neither Milton Vieira nor Felipe Arantes were members of the “The Ultimate Fighter” cast, but that does not mean their featherweight pairing is not worth a watch.

Widely credited as the inventor of the anaconda choke, “Miltinho” makes his UFC debut at 33 years old. The Brazilian Top Team rep rides a three-fight winning streak into his inaugural Octagon appearance and has earned nine of his 13 wins via submission in nearly 11 years as a pro.

Nine years the junior of his opponent, Arantes rebounded from a loss to Iuri Alcantara in his Octagon debut last summer to top Antonio Carvalho during the UFC’s most recent trip to Brazil in January. “Sertanejo” showed well-rounded skills in that UFC 142 victory, escaping a rough first round before landing consistently in the final two frames.

Can Vieira make his way through Arantes’ standup arsenal and apply his trademarked anaconda squeeze on the mat, or will “Sertanejo” find his range and make the elder statesman pay for trying to close the gap?