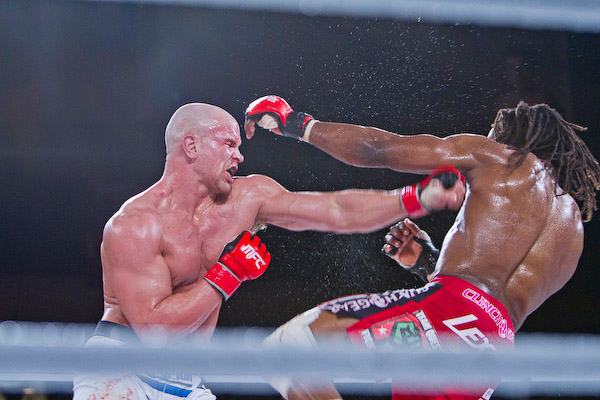 It may be best known to sports fans as the home of the NHL’s Flames, the CFL’s Stampeders and professional wrestling’s Hart Family dungeon, but on Saturday, Calgary, Alberta, Canada will host UFC 149 “Faber vs. Barao.”

Arguably the most injury-ravaged Ultimate Fighting Championship event of all-time, the show was initially expected to be headlined by Jose Aldo’s featherweight title defense against Erik Koch before “Scarface” was forced out with an injury. As a result, the planned UFC 148 co-headliner between Urijah Faber and Renan “Barao” Pegado will now serve as the main event, as the two bantamweights vie for an interim title belt we are told is vitally important and quite expensive.

Despite altering its headliner -- along with virtually every other fight on the bill -- UFC 149 has nonetheless brought some flavor to the table. Prior to the pay-per-view broadcast, the undercard will set the stage at the Scotiabank Saddledome. Here are five reasons to tune into the FX network to catch the UFC 149 prelims:


Fans of bald dudes with karate backgrounds, rejoice. Ryan Jimmo is coming to the UFC.

A former Maximum Fighting Championship light heavyweight titlist, Jimmo has not lost since falling by technical knockout in his 2007 professional debut. Since that loss, “Big Deal” has won 16 consecutive fights, rattling off four straight wins in the MFC before stopping Dwayne Lewis to capture the Canadian promotion’s 205-pound championship. Two successful title defenses followed for the 30-year-old, who outpointed former Bellator Fighting Championships and Strikeforce talent Zak Cummings before doing the same to UFC veteran Rameau Thierry Sokoudjou to close out 2011.

Jimmo’s first and only experience in the Octagon came during his brief stint on “The Ultimate Fighter” Season 8, as he dropped a majority decision to future Strikeforce competitor Antwain Britt in the qualifying round. As all fights on the reality show are classified as exhibition bouts, the defeat did not affect Jimmo’s otherwise perfect stretch. Can he erase the memory of that hiccup and score a victory in his official UFC debut?

Hope for ‘The Hippo’


Attempting to prevent Jimmo from making a successful Octagon foray will be Anthony Perosh, a nine-year professional who has finally been given the opportunity to compete in the UFC at 205 pounds.

Known for his ground game, the 40-year-old made two appearances as a heavyweight for the Las Vegas-based promotion in 2006, falling to Jeff Monson and Christian Wellisch before receiving his UFC release. Perosh then returned to light heavyweight outside the organization, racking up a 5-2 record before once again moving up in weight to fill in for Ben Rothwell on short notice against Mirko Filipovic at UFC 110.

Following his technical knockout loss to “Cro Cop,” the Australian began his light heavyweight run with the promotion one year later at UFC 127, submitting Cage Rage vet Tom Blackledge with a rear-naked choke and then doing the same to French striker Cyrille Diabate in November. “The Hippo” most recently competed in March, stopping promotional debutant Nick Penner with just one second remaining in the first round of their UFC on FX 2 clash.

With plenty of miles already showing on his fight odometer, can the Aussie navigate Jimmo’s nimble standup attack and make a run toward the light heavyweight division’s upper echelon? A cast member on “The Ultimate Fighter 14,” Delorme has done some serious work in his two UFC bouts thus far, submitting game but undersized castmate Josh Ferguson in the season finale before showing some serious heart in his most recent contest against Nick Denis at UFC on Fox 3. After eating some serious shots in the first few minutes of that contest, Delorme somehow weathered the storm and managed to connect with a big left hook of his own, driving his countryman backward before tripping him to the mat and locking up a rear-naked choke to snatch a sweet come-from-behind victory.

Rivera, meanwhile, routinely dismantled Alex Soto in his return to the Octagon, continually staggering the Mexican-American prospect with his power punching attack on May 15 at UFC on Fuel TV 3 and erasing the memory of his ill-fated two-fight stint under the Zuffa umbrella in 2011.

Regardless of who comes out on top, do not be surprised if Delorme and Rivera steal the “Fight of the Night” bonus from the boys on the pay-per-view.


Thought of by many as one of the more talented competitors on Season 14 of “The Ultimate Fighter,” Bryan Caraway did his thing at the season finale in December after being eliminated by eventual season winner Diego Brandao in the show’s semifinals. The submission specialist rocked Dustin Neace with a hard left hook in the first round of his official UFC debut and dominated “The Beast” on the floor, taking his back in both the first and second frames before finishing him with a rear-naked choke.

Stepping up to face Caraway will be promotional debutant Mitch Gagnon, who has finished each of his wins by submission. Beaten just once as a pro, the Canadian has never been finished and has earned seven of his eight victories inside the first round.

After a failed two-fight stint with the WEC and his loss to Brandao, Caraway could now be on his way to establishing himself as a legitimate UFC bantamweight contender. Can he get the job done in his Octagon debut at 135 pounds and turn away the surging newcomer?

The winner of “The Ultimate Fighter” Season 11, McGee followed an unorthodox path to the final. Initially, he was eliminated by Ring via majority decision in the show’s preliminary round but was picked to reenter the competition in the quarterfinals after Rich Attonito broke his hand. Set to rematch Ring in the Round of 8, McGee instead topped James Hammortree to advance after Ring was forced to withdraw with a knee injury.

McGee went on to submit Kris McCray in the season finale to earn his six-figure UFC contract and followed that triumph with two more wins in the Octagon. Following victories over Ryan Jensen and Dongi Yang, however, the 27-year-old was handed the first loss of his UFC career on March 3 by hard-punching Cyprus native Constantinos Philippou.

Ring also looks to rebound from his first UFC loss, as he dropped a unanimous decision to contender Tim Boetsch at UFC 135 in 2011. The Canadian had previously edged Riki Fukuda in a controversial unanimous decision at UFC 127 before submitting James Head at UFC 131.

Can Ring repeat his feat in his hometown and best McGee under the bright lights, or will “The Crusher” take back his exhibition loss and resume his climb up the middleweight ladder?