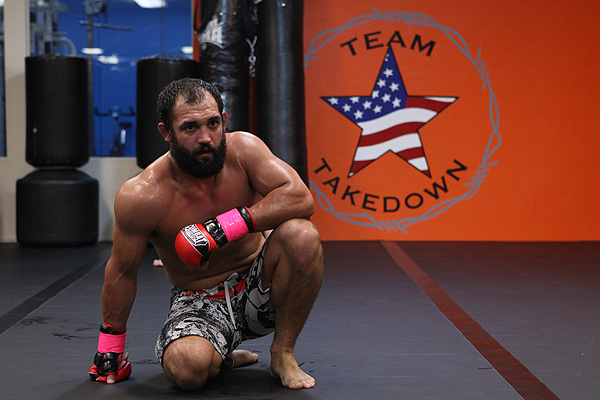 Johny Hendricks has won nine of his 10 bouts inside the Octagon. | Photo: Dave Mandel/Sherdog.com


With consecutive knockouts against Jon Fitch and Martin Kampmann, Johny Hendricks believed he had done enough to secure a shot at Georges St. Pierre and his welterweight title. Ultimate Fighting Championship brass had other plans.

St. Pierre will instead defend his crown against the more marketable Nick Diaz in the UFC 158 main event on Saturday at the Bell Centre in Montreal, while Hendricks tackles onetime World Extreme Cagefighting titleholder Carlos Condit in the co-headliner. The two-time NCAA wrestling champion admits being skipped over has forced him to rethink how he approaches the sport outside the cage.

“You start to look at how you have to get that title shot,” Hendricks said on the Sherdog Radio Network’s “Beatdown” program. “What do you have to do? You have to get your name out there. You have to be doing this, you have to do this, and one thing I’ve learned is the more high-profile fights you do and the better your popularity grows, the more people want to see you do a title shot.”

Condit has rattled off 13 wins in his last 15 bouts, including wins over Diaz, South Korean judoka Dong Hyun Kim, British striker Dan Hardy and surging Canadian prospect Rory MacDonald. The 28-year-old Jackson’s Mixed Martial Arts export has established himself as one of MMA’s most reliable finishers, having secured 26 of his 28 professional victories by knockout, technical knockout or submission. Hendricks views him as a possible final step before a showdown with St. Pierre.

“He’s a great fighter,” Hendricks said. “He’s coming off a title shot, and if I get a win, that’s going to boost my stock up to get the title shot and hopefully solidify it.”

Hendricks has posted a 9-1 record since entering the UFC in 2009. A four-time NCAA All-American wrestler at Oklahoma State University, the 29-year-old Team Takedown representative last appeared at UFC 154 in November, when he needed less than a minute -- 46 seconds to be exact -- to wipe out Kampmann. Hendricks was originally booked to meet Jake Ellenberger at UFC 158, but injuries forced the promotion to reshuffle its deck, moving “Big Rigg” into the co-main event slot opposite Condit.

“I’ve got to constantly be adapting,” Hendricks said during a pre-fight media call. “I wanted to fight GSP, but he chose someone else. I had Ellenberger and I trained very hard for him, and now it’s Condit. I train day by day, and nothing else matters but Condit at this point. I’ve got to go out there and get Carlos.”

Despite his pedigree, Hendricks has shown a thirst for the knockout and a willingness to stand and trade in MMA. He shrugs at the critics who question a lack of diversity in his game, and he can point to his current five-fight winning streak as affirmation.

“If you watch my fights, I have wrestling, but when do I take people down? I have knockout power,” he said. “Just because I don’t go out there and use it all -- you don’t have to use it all to win fights. The most important thing is to win fights. It doesn’t matter how you do it.”

At Home with ‘The Bull’


Having grown accustomed to competing in front of his fellow countrymen, John Makdessi will fight in Canada for the fifth time in six UFC appearances when he locks horns with “The Ultimate Fighter” Season 15 alum Daron Cruickshank as part of the “St. Pierre vs. Diaz” undercard.

“It’s a great honor for me to fight in Montreal,” Makdessi told the Sherdog Radio Network’s “Beatdown” show. “I love fighting in my hometown. I believe a fight is a fight no matter where it is, but being able to be around my team and focus on the fight is the best thing.”

Makdessi threw the brakes on a two-fight losing streak at UFC 154 in November, when he captured a unanimous decision over Sam Stout. The 27-year-old has built his reputation on the back of a creative and dynamic standup attack. His spinning back fist knockout on Kyle Watson at UFC 129 was one of the most-talked-about finishes of 2011.

“I truly believe I’m one of the most exciting fighters to watch,” Makdessi said. “I consider myself a technical fighter. I try to be a smart fighter and go out there and execute my game plan. I’m dedicated. I’m committed. I work hard every day.”