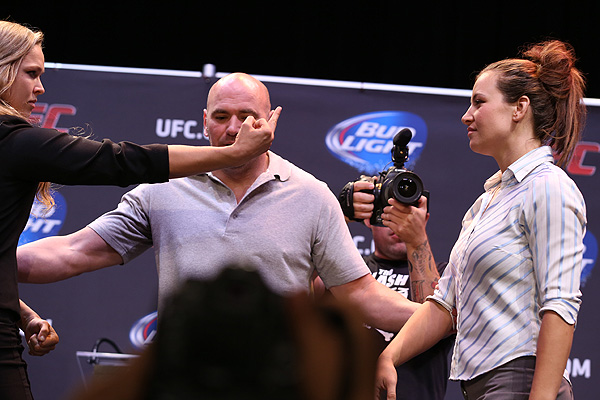 
Miesha Tate buys into the idea that one can turn past failure into future success.

Tate will try and put that belief into practice when she challenges unbeaten Ultimate Fighting Championship women’s bantamweight titleholder Ronda Rousey in the UFC 168 co-main event on Saturday at the MGM Grand Garden Arena in Las Vegas. With a loss to Rousey already on the books, the stakes could not be higher for Tate, a substitute for the injured Cat Zingano.

“The fight is as big as it gets for me,” she said during a pre-fight media call. “It doesn’t get any bigger. It doesn’t get any better. I’m training so hard, and I feel so focused. This has been by far the best training camp I’ve had in my life. I finally feel like I’ve reached a point in my life where my maturity level and my skill set are on the same level. I feel so good about this fight. I feel so confident.

“I know there’s a lot on the line, but for me, that just adds to the element of excitement,” Tate added. “I didn’t get into this sport because I wanted to take an easy road. I’ve always felt like this sport pulls the most out of me.”

Rousey submitted Tate -- just as she has every other opponent she has faced -- with a first-round armbar under the Strikeforce banner in March 2012. While she found some success in the standup and in scrambles, Tate ultimately succumbed to the decorated judoka’s patented maneuver 4:27 into round one. The defeat halted Tate’s career-best six-fight winning streak and fanned the flames of one of the sport’s fiercest rivalries.

“The mistake in the fight was technical, but it happened because of emotion,” Tate said. “I think I was overemotional in the fight. I went out there and I kind of abandoned the game plan a little bit. I allowed her to play into her game plan, and I just got sucked into all of it. I’m more mature now. I’ve grown a lot as a person.

“When you lose, whether you make a mistake ... that’s why you make mistakes in life, so that you can learn and become better, bigger and stronger,” she added. “That’s what I feel like I’ve done. I don’t necessarily look at it as a mistake anymore. I look at it as a learning experience.”

Rousey, who coached opposite Tate on Season 18 of “The Ultimate Fighter,” has since become the face of the women’s mixed martial arts movement. The 26-year-old Olympic bronze medalist made her promotional debut at UFC 157 in February, when she dispatched Liz Carmouce with an armbar 4:49 into the first-ever UFC fight between females. Though the “Rowdy” one emerged with another notch on her belt, Carmouche had her moments, transitioning to the champion’s back before threatening her with a rear-naked choke and neck crank. Rousey never buckled under the adversity, but the success Carmouche enjoyed, no matter how fleeting, seemed to provide hope to the rest of the 135-pound division.

“There’s always weaknesses in the game,” Tate said. “I think people build Ronda up to be this invincible person and that there’s no way she can be beaten, but I don’t see it that way at all. I see a lot of holes in her game, and I see a lot of ways she can be exploited. Just because it hasn’t happened yet doesn’t mean it won’t ever happen.”

Last Stand for ‘The Crippler’ 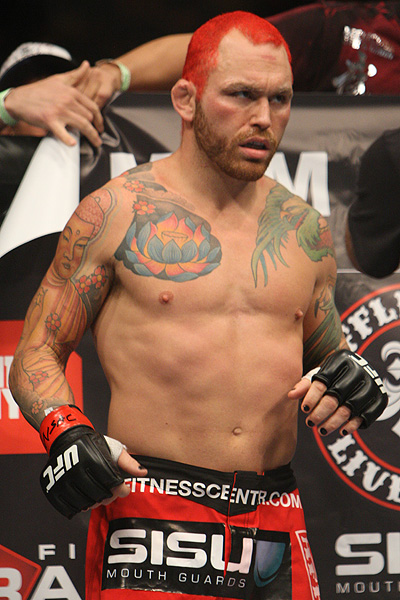 Photo: Dave Mandel/Sherdog.com
Leben owns a 12-9 UFC record.
Chris Leben has carved out quite a career for himself across 21 appearances inside the Octagon, but his run could be nearing its end.

On a three-fight losing streak, Leben will toe the line against “The Ultimate Fighter 17” finalist and former Ring of Combat champion Uriah Hall in a compelling middleweight showdown as part of the UFC 168 prelims. Another defeat could leave “The Crippler” without a UFC roster spot for the first time in nearly nine years.

Hall faces similar consequences should he falter, as he has thus far failed to meet the high expectations that were set for him during his time on Season 17 of “The Ultimate Fighter.” The 29-year-old has wound up on the wrong side of consecutive split decisions against Kelvin Gastelum and John Howard. Still, Leben views him as representative of the new breed of fighter entering the MMA arena.

“The game has changed over the years,” Leben said in his pre-fight interview with UFC.com. “Now we’re getting real athletes. Uriah has got amazing talents and abilities.”


With UFC 168, the MGM Grand Garden Arena will have hosted more Ultimate Fighting Championship events (27) than any other venue ... Chris Weidman wrestled collegiately at Hofstra University, where he remains one of only 10 wrestlers in school history to earn All-America honors at least twice ... Only four fighters have defeated Josh Barnett: Daniel Cormier, Antonio Rodrigo Nogueira, Mirko Filipovic and Pedro Rizzo ... Fabricio Camoes lists three-time Abu Dhabi Combat Club Submission Wrestling World Championships gold medalist Royler Gracie as his hero ... Jackson’s Mixed Martial Arts standout Diego Brandao recorded four first-round finishes en route to winning Season 14 of “The Ultimate Fighter,” as he submitted Dennis Bermudez and knocked out Jesse Newell, Steven Siler and Bryan Caraway ... American Top Team’s Gleison Tibau leads all active UFC fighters in career takedowns landed with 71, according to FightMetric data ... Dennis Siver has won six post-fight bonuses -- three for “Fight of the Night,” two for “Knockout of the Night” and one for “Submission of the Night” -- totaling $260,000 ... When Robbie Peralta was born in Escondido, Calif., on March 14, 1986, the top five movies at the domestic box office were “Gung Ho,” “Pretty in Pink,” “The Color Purple,” “Down and Out in Beverly Hills” and “Hannah and Her Sisters” ... Afghan striker Siyar Bahadurzada is one of six men to have held the Shooto middleweight championship, along with Kenji Kawaguchi, Hayato Sakurai, Anderson Silva, Masanori Suda and Shiko Yamashita ... When Bobby Voelker climbs into the cage to confront William Macario, two years, five months and six days will have passed since his most recent victory.