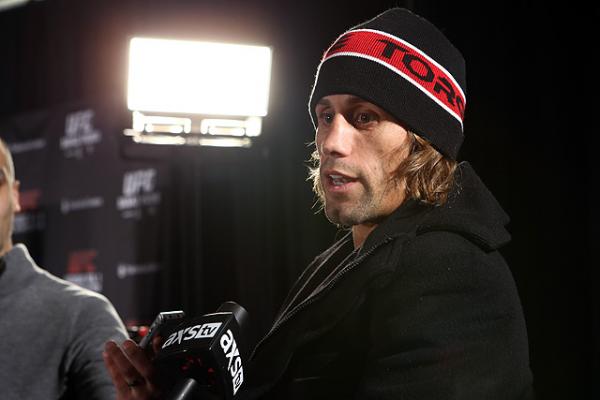 
We’ve entered a period in mixed martial arts that can best be described as a changing of the guard, no pun intended.

Over the past year, we’ve seen the Ultimate Fighting Championship’s landscape shifting like tectonic plates during a California earthquake, with several champions and top contenders overtaken by rising young stars. At UFC 169 in Newark, N.J., it was more of the same. More importantly, there was a key lesson to be learned if you look at the larger picture.

After UFC 66 in December 2006, it was clear we didn’t need to see Chuck Liddell-Tito Ortiz 3. The same could be said following Anderson Silva-Rich Franklin 2 in 2007. More recently, UFC 168 in December should have taught us all that we don’t need to see a Silva-Chris Weidman trilogy -- even though it could be booked and would likely do huge numbers sometime in 2015 -- to tell us what we already know. Thus, if you don’t learn from history, you’re doomed to repeat it. Renan Barao’s second defeat of Urijah Faber on Saturday at the Prudential Center provided us with a solid understanding of one thing: those guys don’t need to hook it up a third time.

Making matters worse, Faber now finds himself in a Franklin-like vortex. How do you book him? It doesn’t make sense to give him another title shot against a guy he’s been clearly beaten by twice. It’s also risky to match Faber with any other top-ranked fighters and risk him beating other potential title contenders. It’s a lose-lose situation.

While guys like Frankie Edgar and B.J. Penn were universally recognized as two of the best pound-for-fighters from the lighter weight classes, Faber could have been in that same conversation. He was dominant for years, so saying he’s one of the best to ever put on MMA gloves isn’t a stretch. Yet, at 34 years old and with 37 fights on his resume, how many more title shots does he have in him? He’s come close; he’s changed weight classes; and he continues to destroy guys in three-round fights. None of that matters going forward, though.

Sure, there is one clear difference here compared to the above scenarios: Faber’s fight with Barao at UFC 169 was stopped early. There’s no doubt about it.

“I think [Herb Dean] is the best referee in the business,” UFC President Dana White said at the post-fight press conference. “He rarely ever makes mistakes, but he made a mistake tonight. Faber was blocking those shots; he gave the thumbs up.”

Faber was also gracious in defeat, complimenting Dean and Barao following the fight. Eventually, though, the truth came out.

“On the same note, Barao is getting better and he caught me with a clean punch and went for the kill,” Faber said. “It’s not a situation where I can ask for an immediate rematch or anything like that.”

So ask yourself this: Did you see anything in the fight that led you to believe Faber was going to win? If you're honest here, the answer is no. He has been given every opportunity to win a title in the UFC, and he hasn’t done it. While it’s unfortunate and it would most likely be better for business if he did have a belt, don’t look for Faber to challenge for one again anytime soon.

As for Barao, he has no plans of leaving the division. With Nova Uniao teammate Jose Aldo talking about vacating his 145-pound title after another win at UFC 169, Barao doesn’t see himself leaving the 135-pound ranks in the foreseeable future.

White tied it all together by sharing how impressed he has been with the bantamweight champ.

“I’ve been talking about Renan Barao for months,” he said. “Every time this kid fights, he looks better and better and better. He’s a finisher. I just think this kid is one of the best in the world, pound-for-pound.”

Photo: D. Mandel/Sherdog.com
Mir has lost four straight.
UFC 169 was most likely the setting for Frank Mir’s final fight inside the Octagon. Try this for total domination: His opponent, Alistair Overeem, landed 139 strikes to Mir’s five. No, that’s not a typo. Mir landed five strikes in 15 minutes.

Yes, Mir is a ground specialist and one of the best to ever compete in the UFC’s heavyweight division, but allowing the other guy 134 more strikes is not the path to victory. It was also the fourth largest gap in the history of the division.

When Mir knocked out Antonio Rodrigo Nogueira in December 2009 for the interim heavyweight championship, he looked to finally be back on top of the mountain. Fortunes turn quickly in the fight game, though, and losses in two of his next three fights had people wondering if Mir was done. He rebounded with three straight wins, including a knockout against Mirko Filipovic in 2010 and a submission of Nogueira in 2011. Four straight losses later, this looks to be the end of the road for the 34-year-old Las Vegas native. Watching him just stand there and literally do nothing in the final minute of the fight with Overeem was almost symbolic. It showed he had nothing left in the fight and most likely nothing left to really offer in future fights.

Moving to the other side of the cage, White was less than impressed with how things played out between the two highly decorated heavyweights.

“It wasn’t the fight I expected to see,” White said, which is much nicer than some of the other things he has been known to say at post-fight press conferences. In a later Fox Sports 1 interview, he built upon those thoughts and took aim at the Dutchman: “He comes out with a crappy performance [and] then he calls out a guy (Brock Lesnar) who doesn’t even fight anymore. Not a great night for Alistair.”

Exactly who the real Overeem is in the UFC remains to be seen. He ran through a returning from near-death-illness Lesnar in 2011 before being KO’d by Antonio Silva and losing a fight he pretty much dominated against Travis Browne in 2013. His win over Mir at UFC 169 did little to elevate his stock.


Sorry pro wrestling fans: don’t look for CM Punk inside the Octagon anytime soon. White said Punk, whose real name is Phillip Jack Brooks, has not reached out to him since quitting World Wrestling Entertainment, nor is there good fit for him in the UFC. “I like him. He’s a great guy. It’s a little late to get into the [fight] game,” White said ... Talk at the post-fight press conference revolved around a potential super fight between featherweight champion Aldo and lightweight titleholder Anthony Pettis. “I want the fight [and] the fans want the fight, so why not? We’re ready to fight, so let’s get this fight,” Aldo said. White, meanwhile, provided one of his more memorable quotes in discussing the hypothetical matchup: “It doesn’t suck.” Pettis also wants to make the fight happen, but he remains sidelined following knee surgery and is not expected to return until this summer ... Ricardo Lamas, who lost a unanimous decision to Aldo in the co-main event, indicated he was out to prove a point. “I wanted him to know that I wasn’t scared of him. I got a little too caught up in that. It was just stubbornness that got in the way. Next time, I need to stick to my game plan a little better.” The 31-year-old had never before lost at 145 pounds. Team Lamas had the best collection of hair on the card. Lamas himself wore a Mohawk on top, with a tail in the back; it was half Chuck Liddell, half Miguel Torres. Meanwhile, one of his cornermen wore a sumo-style bun on top, with another sporting braided cord rows ... In the pay-per-view opener, Abel Trujillo knocked out Jamie Varner in a bout that won “Fight of the Night” and “Knockout of the Night.” There was no “Submission of the Night” bonus because there was no submission for which to award it. Instead, a record 10 fights went the distance at UFC 169. “I don’t have a game plan. I just come in there to fight. I don’t fight for a decision. I fight to finish,” Trujillo said. The Blackzilians representative wants to be matched with Donald Cerrone or Nate Diaz next ... The second pay-per-view clash featured a flyweight scrap between Ali Bagautinov, who looks like a mini Vladimir Matyushenko, and John Lineker, who could easily be described as a mini Vitor Belfort, with his Mohawk-heavy hands combination. Bagautinov won a unanimous decision but not before doing a double biceps pose after standing and waving at the crowd as Lineker worked on his ankle in the final 10 seconds of the third round. Somewhere, the Diaz brothers were nodding in approval.


“Walkout Shirt of the Night” went to Barao. He wore a nice Dead Rush T-shirt with a skeleton. It was a change of pace from all the Affliction copycat designs or NASCAR-esque billboard shirts other fighters wear ... “Line of the Night” from a cornerman came from Kevin Lee’s trainer, who asked for an “old-school Dan Severn choke” just prior to the third round of his fight with Al Iaquinta. Lee wound up losing via unanimous decision.