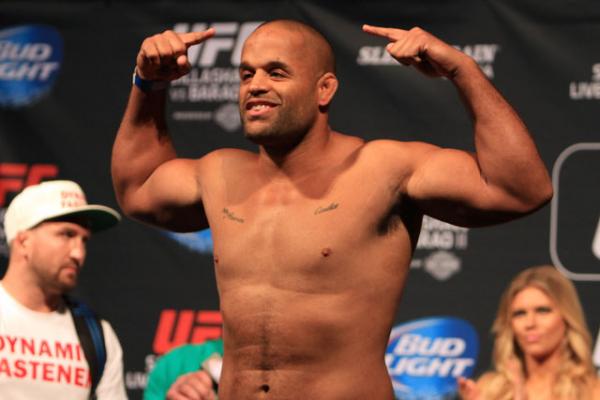 At the time, Hamilton was little more than an athletic big man who had only recently begun to dabble in mixed martial arts. His professional debut was still nearly three years away. That night, as he sat next to his wife, Hamilton allowed himself to dream of what it might be like to punch the clock alongside a St. Pierre or Liddell.

Hamilton was also in attendance at UFC 102, when a physically imposing heavyweight named Todd Duffee burst upon the scene with a seven-second knockout of Tim Hague. While Duffee appeared to be a star-in-the-making, Hamilton was still more than a year away from becoming a full-fledged prizefighter.

Fast forward to the present day, and Hamilton is preparing for what could be his breakout moment, a showdown with Duffee at UFC 181 at the Mandalay Bay Events Center -- the same hallowed ground where a dream unofficially began.

“It’s crazy how everything’s lined up like this,” Hamilton told Sherdog.com. “I’m just going to enjoy the moment and go out there and seize the opportunity.”

Duffee has yet to achieve the superstardom his Octagon debut seemed to forecast. He was out of the UFC just one bout after starching Hague, sent packing amid claims from Dana White that he didn’t appreciate his spot in the promotion.

Specific reasons for Duffee’s unceremonious departure were never really all that clear, but he finally made his way back to the organization in December 2012, when he stopped Phil de Fries via technical knockout a little more than two minutes into the first frame of their encounter at UFC 155.

“I’ve been keeping track of Todd Duffee over the last couple years because as a heavyweight, you’re always looking at the rest of the competition,” Hamilton said. “I had heard about this issue that he was having. It’s unfortunate, especially for a guy with his ability and age. It really takes away a lot of time from his career, so that sucks. From what I hear, he’s healthy again, he’s ready to go. I know he’s a competitor and so he’s going to come in there in shape and he’s going to come hard.”

Having seen Duffee at his destructive best years ago, Hamilton has no plans to underestimate his opponent. However, the Seattle, Wash., native believes Duffee has his flaws.

“From what I can see, [he’s] a little inconsistent over the years,” Hamilton said. “He’s had some injuries; some of his performances have been amazing and some other ones not so amazing. He’s a little inconsistent. I’m interested to see the type of person that comes into the cage this time around, but I know he has a statement to make and a point to prove.”

Meanwhile, Hamilton is still very much trying to establish a secure foothold in the division. The former Maximum Fighting Championship titlist was submitted by Alexey Oleinik in his UFC debut but rebounded stop Ruan Potts via TKO at UFC 177.

The man known as “Freight Train” says he felt much more comfortable during his sophomore venture to the cage. Finally having his first moment in the Octagon proved to be more overwhelming than Hamilton had initially anticipated.

“A lot of people talk about UFC jitters, and I don’t really know if I had the jitters or whatever, but for me it was just such a long road. It was a lot of sacrifice and hard work to get to that point. It was just an emotional moment. I was a little bit overwhelmed emotionally,” he said.

“I finally made it to the UFC. Walking out to the cage I almost started crying a little bit because I had dreamed of that moment for so long. I think my mind wasn’t all the way as focused as it could have been.”

In pursuit of his second UFC triumph, Hamilton has adopted a nomadic approach to his camp, training with wrestling coach Izzy Martinez in Chicago, Ronda Rousey striking guru Edmond Tarverdyan in Glendale, Calif., and finishing up at Jackson-Wink MMA in Albuquerque, N.M.

Hamilton says being able to take bits and piece from different coaches helps him to avoid stagnation.

“It’s always something new. I found that works good for me,” he said.

Although he has been more active in recent years than Duffee, Hamilton still has a ways to go to achieve the name recognition of his foe. In a shallow heavyweight division, sometimes it only takes one big knockout to build a star -- just ask Duffee.

Hamilton wouldn’t be surprised if his bout against Duffee ends in abbreviated fashion -- the two men have 12 first-round finishes between them -- but he could also see things going a different way. No matter the direction of the bout, he sees it ultimately producing the same result.

“I’ve been competing in sports a very long time, and I just feel like the experience level, my work ethic and my heart is really gonna come into play. If it doesn’t end in the first couple seconds, I think it’s gonna be a long battle,” Hamilton said. In the end, I’ll have my hand raised just because all the things I’ve been through. I’m not gonna give up.

“I’m gonna have to die before I give up; they’re going to have to carry me out of that cage. I think when you have somebody like that that’s willing to put it all on the line, it’s just gonna make for an amazing fight.”