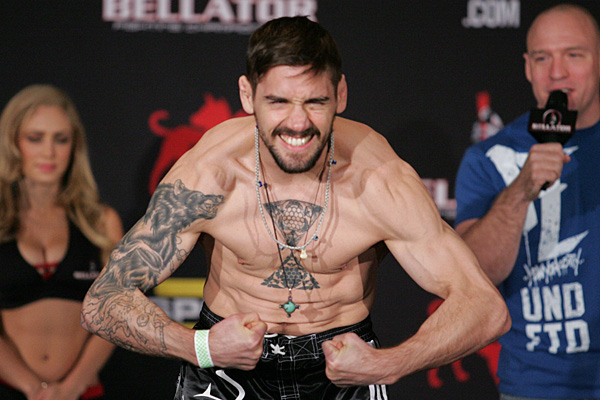 Dave Jansen is a man who has seen his share of ups and downs.

The lightweight has experienced the excitement of a 13-0 start to his professional career, only to find himself booted from the World Extreme Cagefighting roster on the heels of back-to-back defeats. Outside the cage, Jansen has endured losses far greater -- namely, the 2007 death of his father, who was hit by a car while riding his bike in Jansen’s hometown of Portland, Ore.


Advertisement
Over the last two years, Jansen has found new life as a member of the Bellator lightweight division, where he has posted a 5-0 promotional record and stands just one victory away from a guaranteed title shot and a $100,000 payday. Standing in his way will be Marcin Held, the young submission specialist whom Jansen faces tonight in the main event of Bellator 93.

Though much rides on Jansen’s performance tonight at the Androscoggin Bank Colisee in Lewiston, Maine, the Oregonian said that any pressure he places on himself is mitigated by factors far more important than whether he wins or loses an athletic contest.

“I think just having healthy relationships in your regular life is how you go into a fight with a clean conscious, because you don’t have any distractions or anything holding you back,” Jansen recently told Sherdog.com “There isn’t as much pressure that way. My friends and family are still going to love me one way or another. That’s what matters.”

Jansen began his MMA career after 15 years of competitive wrestling, two of which took place at the University of Oregon before the 33-year-old became “burned out” with the sport and turned in his singlet. Six years later, Jansen met future IFL and UFC talent Chris Wilson and became inspired to give MMA a try.

The lightweight threw himself wholeheartedly into fighting, moving back in with his mother to avoid paying rent so he could fully dedicate himself to training. While this obsessive approach netted the fighter excellent results early in his career, Jansen believes that his decision to take MMA less seriously has actually made him a better fighter -- a development initiated by a conversation Jansen had with former IFL champion and Team Quest teammate Ryan Schultz years ago.

“Ryan Schultz actually told me something that stuck with me early in my career. I tried to make everything perfect, and it never was. He told me, ‘It’s never going to be perfect, man. You’ve just got to make do with the situation,’” Jansen recalled. “Ryan was having a party at his house where he ordered the fights, and he asked me, ‘Dave, what do you have? What defines you right now?’ I said, ‘Fighting,’ because fighting was all I really had at that point. He said, ‘That makes me sad. That’s not going to work.’ Since then, I’ve tried to not take it so seriously.”

Jansen parted ways with Team Quest in 2011 and took up with Sports Lab alongside UFC welterweight Mike Pierce and head coach Phil Claud after bouncing around from gym to gym as a self-described “MMA nomad.”

“I kind of felt like I didn’t have a gym there for about eight months. Then I met with Phil Claud and Mike Pierce and saw what they were doing, and it was just different,” said Jansen. “It wasn’t a cookie-cutter MMA formula that all these other programs had. It was more geared toward professional fighters getting results with one-on-one instruction.”

Though the team is currently awaiting the completion of a brand new facility, Jansen and his teammates keep a busy training schedule between sparring at Nemesis Jiu-Jitsu downtown, hitting pads with boxing coach Andy Metzger and swimming several times a week at Mount Hood Community College. The lightweight has even done specific leg lock defense training with Keisuke Andrew of Enso Jiu-Jitsu in preparation for his meeting with Held, which was initially supposed to take place last December to close out Season 7 before the bout was postponed at the last minute. Though Jansen said the delay was initially frustrating, he believes that he has made good use of the extra time he has been afforded.

“I’m a better fighter now than I was in December when I was supposed to fight Marcin,” said Jansen. “Him being good at what he is good at made me focus on areas of my game that I might not have that much. I’ve worked leg lock defense [in the past], but I’ve never gone that deep into the leg lock game before.”

With arguably the biggest fight of his career now just hours away, Jansen, whose hobbies include reading sci-fi and philosophy as well as keeping bees, hopes to use his positive if not unorthodox outlook to his advantage in tonight’s showdown.

“I didn’t want to be a mediocre fighter -- a guy in the middle of the pack. I feel like I’m breaking away now. This is my chance to get to the front of the pack,” said Jansen. “[Being in this position] has kind of redeemed all the work that I’ve done, and the training I’ve put in and the decisions that I’ve made.

“Right now, I’m on this kick about living in the moment. I can’t dwell on the future or the past, because these are all illusions. Any time I’m dwelling on the past, it’s kind of a figment of my imagination. I can just focus on this moment and be content, because what else do you need but the present moment? That’s all we’ve got.”