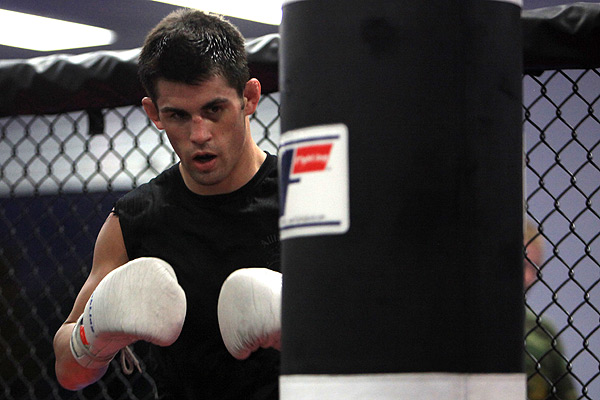 Dominick Cruz finally has a date for his next fight. | Dave Mandel/Sherdog.com


Former UFC bantamweight champion Dominick Cruz is set to return to the cage after nearly three years on the shelf.

ESPN.com’s Brett Okamoto on Tuesday reported that Cruz will square off against surging Japanese contender Takeya Mizugaki as part of UFC 178, likely on the pay-per-view portion of the card. Headlined by a light heavyweight title rematch between Jon Jones and Alexander Gustafsson, the Sept. 27 event will take place in Las Vegas, though a venue has yet to be announced.

Cruz, 28, has not competed since his October 2011 title defense against Demetrious Johnson. “The Dominator” has seen multiple returns scheduled and then scratched due to a series of injuries, including an ACL tear which required a pair of surgeries. In January, Cruz vacated his title when he was forced to withdraw from a unification bout with then-interim champ Renan Barao slated for UFC 169. The Alliance MMA product has tasted defeat just once in 20 professional bouts, a 2007 loss to Urijah Faber which Cruz avenged in 2011.

Mizugaki will enter the bout on five-fight winning streak which most recently saw him outpoint Francisco Rivera at UFC 173. Since transferring to the UFC from World Extreme Cagefighting in 2011, the 30-year-old Kanagawa native has compiled a 7-2 record, including victories over Bryan Caraway and Nam Phan.