HOUSTON -- Rafael “Feijao” Cavalcante shocked light heavyweight champion Muhammed “King Mo” Lawal at Strikeforce “Houston” on Saturday at the Toyota Center. Lawal, a highly regarded wrestler, got caught up in a striking battle with Feijao and paid the price, losing by knockout in the third round.

Lawal was expected by many to employ a grappling-heavy strategy, akin to the tactics he used to secure the title against Gegard Mousasi in April. However, Feijao fought off a number of takedowns and remained upright outside of a few seconds in the first round.

Despite the fact he could not -- or would not -- take the fight to the mat, Lawal held his own in the striking battle. He hurt Feijao with digging body shots in the second round and was in the midst of another body barrage when the Brazilian unloaded a trio of knees, the second of which clearly hurt Lawal.

As the champion stumbled backwards, Feijao clipped him with an overhand right that put him down. Lawal went into survival mode and shot in on a single-leg takedown attempt, but Cavalcante was too strong and battered him with punches and elbows until referee “Big” John McCarthy stepped in 1:14 into round three.

“I just need to make some adjustments; that’s all,” Lawal said. “He fought a hell of a fight. I’ll come back stronger. I’m not worried. Losses always make true champions stronger.” 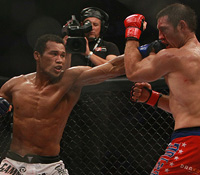 Dave Mandel/Sherdog.com
Jacare outpointed Kennedy.
Ronaldo “Jacare” Souza anchored the Strikeforce middleweight championship belt to his waist after a hard-fought five-round battle with Tim Kennedy. The Brazilian -- known for his world class jiu-jitsu skills -- battered Kennedy with a tenacious standup attack that kept him off balance throughout the fight.

“In the cage, you can only find warriors, and Tim Kennedy’s a warrior,” Jacare said through his translator. “He had a hard time taking me down, so we had to go stand up. I’m stoked that I won.”

Kennedy, who may have thought he had a standup advantage, found out early that “Jacare” had closed that hole in his game. He consistently beat Kennedy to the punch over the first two rounds and stymied the former American Special Forces soldier at nearly every turn. Kennedy’s only real output over the first two frames came by way of a pawing left hook that briefly knocked an off-balance Souza to the mat late in round one.

“Jacare” was undeterred in his strategy to trade on the feet and cut Kennedy over the left eye with a nice combination early in the third round. Kennedy answered with his first takedown of the match.

The American changed it up late in the middle rounds by attacking Souza’s lead leg, but, despite those efforts, “Jacare” just kept coming.

Kennedy was more successful late in the fight, but he could not muster enough to sway the Texas judge’s. A big slam in the fight’s final seconds excited the pro-American crowd, but it was not be enough to earn Kennedy the victory.

“The best grappler in the world couldn’t get me on the ground,” Kennedy said. “I [took] him down a couple of times. My hat is absolutely totally off to Jacare. It was a very, very frustrating fight. I have no idea what happened with the decision.”

“I don’t like judges,” Kennedy said. “This is what happens when I go to them. You’re not going to see me here again. I’m going to train harder. I’m going to come back meaner.” 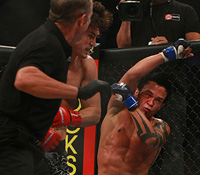 Dave Mandel/Sherdog.com
Noons blasted Gurgel.
Strikeforce lightweight contender K.J. Noons made a statement with his second-round knockout victory over Jorge Gurgel, but it may not have been the one for which he hoped.

Noons’ transgressions began at the end of the first round, when he landed a huge left hook that crumpled Gurgel; the punch was clearly thrown after the bell sounded ending the period.

Noons was in control throughout the fight. He took the center of the cage and delivered crisp combinations and digging body shots that showed his technical advantage over an always game Gurgel, a much less technical brawler.

“He was really staying on his toes and kind of frustrating me staying away from my hands,” Noons said. “I’ve got that killer instinct, and I just wanted to get in there and try and finish it and put on a good performance for the fans.”

After picking himself up off the canvas after the late punch at the end of the first round, a still-reeling Gurgel came out for the second on wobbly legs. He was sent crashing to the floor by a blistering straight right-left hook combination that came as a counter to a wild Gurgel right hand. Noons looked to the referee as he peppered him with three left hands and, as referee Kerry Hatley was moving in to stop the bout, an errant right knee that did not land but was clearly aimed toward Gurgel’s head.

The one-sided affair came to a close at just 19 seconds of the second round and moved Noons one step closer to a potential shot at either lightweight champion Gilbert Melendez or welterweight titleholder Nick Diaz, a man he has already beaten. 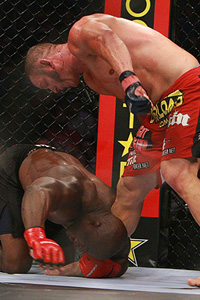 Dave Mandel/Sherdog.com
Griggs stunned Lashley.
After a controversial call, Arizona-based heavyweight Chad Griggs stopped former World Wrestling Entertainment superstar Bobby Lashley at the end of the second round in their featured heavyweight bout. Lashley dominated the bout with takedown after takedown, but he failed to exact significant damage once he got the bout to the mat.

The turning point in the fight came late in the second round when referee Jon Schorle stepped in and had Lashley -- who had Griggs in full mount -- pause to get a cut under his left eye checked by the ringside physician. After getting the approval of the doctor to continue, Lashley and Griggs were restarted on their feet, rather than back in the mount.

“I felt him getting tired,” Griggs said. “He was working hard to finish me. I just tried to relax, kept trying to hit him every time he posted up, and I was. I knew I opened him up, and I just kept on going for it. I knew he was bleeding. I knew it was bothering him.”

Lashley, like he had repeatedly in the fight, shot right back in but was finally stopped by Griggs. As Lashley clutched his ankle hoping to finish the takedown, Griggs smashed away at his head with powerful hammerfists right up to the end of the frame.

Lashley stayed on the mat between rounds, and the excitement in the Griggs corner signaled the fight had been stopped.

“That guy is so big and strong,” Griggs said. “I could feel him burning energy trying to hit me, and he wasn’t hurting me. I could hear him huffing and puffing. I think there’s 15 people here who thought I was going to win.”