A second fight for Herschel Walker could be in the cards much sooner than later.

Walker, the 1982 Heisman Trophy winner and 12-season NFL veteran, earned a third-round stoppage against Greg Nagy in his MMA debut at Strikeforce “Miami” last Saturday in Sunrise, Fla. The 47-year-old Walker’s performance, which was on par with the three-month crash course he got in the sport, garnered unprecedented media attention, including multiple mentions through ESPN’s platforms and a front-page story on CNN.com.

The million-dollar question, of course, is would Walker be willing to do it again?

The 1992 U.S. Olympic bobsled team member said he’d even be game to turn right back around into training -- with his coaches’ blessings -- for Strikeforce’s second CBS-telecasted event, currently targeted for either April 17 or 24.

A CBS representative told Sherdog.com Wednesday that the network would be open to hosting Walker’s next fight on the April card.

Strikeforce CEO Scott Coker said he planned to call Walker and his trainers on Thursday to a gage their interest in another bout. Coker didn’t rule out an April return.

If an offer was made, Walker said he’d defer to his American Kickboxing Academy trainers for their approval. Walker re-located to San Jose, Calif., for a 12-week camp with the reputed team in October.

“I’m going to get back into the gym and say I’d love to have another fight, and I’m gonna work hard, but I’m leaving it my trainers and coaches’ hands and the fighters at the gym,” said Walker. “If they think I’m not ready, they gotta tell me, and I will swallow my pride and not do it.”

Javier Mendez, one of Walker’s primary trainers at AKA, said a late April bout would be a possibility under the right conditions. 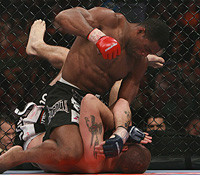 D. Mandel/Sherdog.com
Walker was a hit for Showtime.
“If he could devote the same type of training as he did in his first fight, 100% yes,” said Mendez. “Because he would improve again at an amazing rate. He truly is one of a kind.”

Walker said he’d ask his AKA team to hold his progress to the same scrutiny he required of them when he began with them last October.

“I want to know that I’m still the Herschel of -- that 47-year-old that’s got a 25-year-old way of doing things. If I have lost that, then I don’t think I’ll fight again,” he said. “My thing is go out and perform at the highest of levels. I’m not there to be a circus act. I want to be a pure fighter.”

There have been two distinct reactions to Walker’s fight in the MMA community. Some have been enthusiastic about the added attention Walker’s participation has brought Strikeforce and the sport. Others questioned why a novice fighter was given such a coveted platform on which to make his debut.

“I probably didn’t deserve to be on it because there were a lot of great fighters on that card that probably deserved to be there more than me, but I want to try and bring some more recognition to this sport,” said Walker. “If I can come into the sport and maybe use my fame to promote it a little bit and get more people to watch and maybe bring it a little more into the mainstream, I don’t know why anyone who’s an MMA fan would object to that.”

Walker, who hadn’t yet watched his fight, noted that he had substantial work ahead of him.

“You want to win whatever you set out to do, but I know I made some mistakes in it,” said Walker. “On the ground-and-pound, I didn’t do it as well. I could’ve sat back on him a little bit more to keep his legs from coming up…I could have stood away a little more. I didn’t have to go to the ground. I could have stayed on my feet a little more.”

“
After the situations with
Jose Canseco and Johnnie
Morton, they didn't give
athletes a very good name.

Walker also thanked the promotion for the opportunity in light of the prior attempts made by his peers to break into the multi-disciplined sport.

“After the situations with Jose Canseco and Johnnie Morton, they didn’t give athletes a very good name,” said Walker.

Walker, a man who’s spent a lifetime stockpiling achievement after achievement, is probably more cognizant of limitations than anyone.

“I got to be realistic in the sense that, for me, it really is a great idea (to return quickly) and the reason why is I’m not getting any younger,” said Walker. “A lot of players, we sometimes don’t know when to walk away from the game. You can stay in it and Brett Favre has performed real well, but sometimes it’s time to leave the game. I don’t want to be sitting around so long, me taking the time to decide what I want to do and maybe a year passes by. I’m not getting any younger.”

More from Herschel » Steroid Talk, the UFC and a $600 Payday