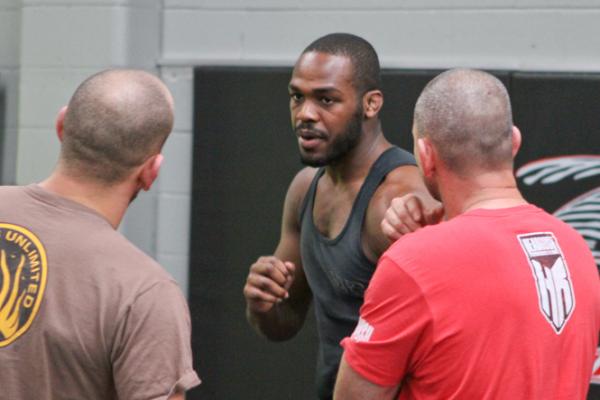 Jon Jones plans on staying in Albuquerque while he recovers from injury. | Will Fox/Sherdog.com


ALBUQUERQUE, N.M. -- While it is difficult to find much in the way of silver linings when it comes to the knee injury that forced the postponement of Jon Jones’ scheduled light heavyweight title defense against Daniel Cormier at UFC 178, Team Jackson-Wink has found at least one.

Cormier originally took the Sept. 27 bout against Jones after Alexander Gustafsson was forced to withdraw due to a knee injury. To take the fight, the two-time Olympian put off plans to undergo surgery to repair a torn LCL and partially damaged ACL. Now, with Jones’ suffering a knee ailment of his own, their matchup has been moved to UFC 182 on Jan. 3.

That means Cormier has more time to prepare. It also means he should have no excuses when the two light heavyweights square off in the Octagon early next year.

“One positive I think there is, is [Cormier] was having a shorter camp,” Jackson-Wink assistant striking coach Brandon Gibson told Sherdog.com. “I’m sure he was going to be worried about getting in shape, and we didn’t want any excuses from him. This gives DC plenty of time to get better at every aspect he wants to get better at and heal whatever needs to heal.

“Because when we face him, we want to face the best DC there is. No excuses.”

Greg Jackson echoed a similar sentiment, although as the renowned trainer often does, he took a more diplomatic route to get there.

“If Jon is lucky enough to earn a victory over Cormier, he should be the best Cormier that you can possibly fight. That’s why you’re fighting. If you’re just fighting to win, you can fight bums all day long,” Jackson said. “If you’re trying to fight the best when they’re the best, that means a little more. The more training for Daniel, the better, and vice versa for Jon. [When] Daniel fights Jon it should be at Jon’s best. That’s the whole point of the thing.”

Thanks to a media day brawl at the MGM Grand Garden Arena in Las Vegas and some choice words during a leaked off-air exchange following an ESPN interview, anticipation for the 205-pound championship tilt had reached a fever pitch over the course of the past week.

That only made for a bigger letdown when it was announced on Fox Sports 1 on Tuesday that the bout had been moved three months down the road. Gibson, who met Jones at the hospital on Monday after the injury occurred, said that the champ was no exception.

“[He was] disappointed for sure. He was very happy with how camp was going, the game plan we put together and the progression we had already made,” Gibson said. “There’s no anger: it’s just a disappointing, frustrating feeling -- but [he’s] still very optimistic about his recovery.”

As previously reported by MMAFighting.com, Jones is believed to have suffered a torn left meniscus as well as a sprained ankle. Avoiding surgery would be ideal, but it is not currently known if Jones will eventually have to go under the knife.

According to Jackson, the injury occurred while Jones was defending a takedown from UFC heavyweight talent Alistair Overeem during wrestling practice.

Although nearly five months remain until his rescheduled date with Cormier, Jones is likely to remain in New Mexico until that fight takes place instead of heading home to New York.

“We’re just going to continue to get better. There’s still a lot he can do even with his knee rehabbing, so the team is going to focus on some other things,” Gibson said. “Whether it’s just mental or visualization or doing rehab exercises. He’s gonna keep getting better.”

Of course, there will be limitations to what Jones can do -- at least early on.

“You can’t do any kickboxing, but we can work stuff off his back, stuff I wanted to work anyway,” Jackson said. “It just gives us more time.”

As for the conspiracy theorists who think there are ulterior motives behind Jones’ withdrawal? Well, Jackson has heard it all before, and at this point, the naysayers almost always fall on deaf ears.

“The important thing is I know [what happened]. I know he’s not ducking him. I was there when the injury happened,” Jackson said. “That’s all I need. There’s always theories. That’s sports; that’s entertainment.”