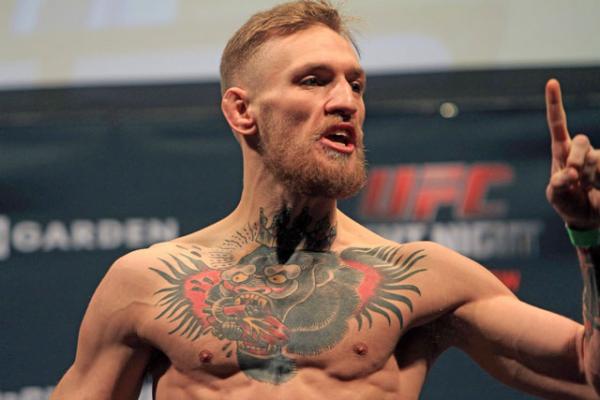 Conor McGregor has his sights set on the No. 1 featherweight in the world. | Photo: Jeff Sherwood/Sherdog.com


It didn’t take long for Conor McGregor’s second-round knockout of Dennis Siver to become little more than a footnote.

Just moments after the “Notorious” one stopped Siver 1:54 into the second round of the UFC Fight Night headliner in Boston on Sunday evening, he set his sights on a bigger target: reigning featherweight king Jose Aldo. With a raucous crowd at TD Garden celebrating McGregor’s fifth UFC triumph, the Irishman left the Octagon to confront the Brazilian at his cageside seat.

A fired-up McGregor proceeded to scream at the Nova Uniao star, but Aldo would not take the bait, offering only a bemused smile in response. Leading up to Sunday’s bout, Aldo had likened McGregor to a jester or a fool in the champion’s featherweight kingdom.

“I was screaming. I said, ‘Who are you calling a joke?’ This is no joke,” McGregor said in an interview on Fox Sports 1. “I just screamed. I would’ve smacked him. I swear I would’ve smacked him -- only for that first-hand experience in Vegas with [Jon] Jones and [Daniel] Cormier where they had that little scuffle... .and they got fined all that money.

“I’m not giving any money to smack a Brazilian in the crowd. I’ll smack him when the fight is on.”

While McGregor initially had dreams of a big stadium show in Ireland hosting his showdown with Aldo, UFC President Dana White said that the fight is far more likely to take place in Las Vegas around Memorial Day weekend.

For his part, McGregor seemed amenable to the change in plans.

“If it is Vegas, there’s a reason... The belt is the belt,” McGregor said. “The stadium will happen [someday]. The visions might be a little skewed sometimes, but they’re not far off. I’m getting better at them.”

No matter the venue, the SBG Ireland representative has a pretty clear idea of how the fight will play out. He was definitely not impressed by Aldo’s stature in person.

“I’ll definitely knock him out. Looking at him, I give it the four-minute mark. Now, I gave it the two minute mark with Dennis and it went two rounds -- maybe it will be a four rounder. I feel that I’ll break him,” McGregor said.

“Did you see the size of him? He’s a tiny little thing. He’s reminds me of Diego Brandao. They’re all small. He has the same body type as Brandao. I felt it already, that body type. They feel small to me. They feel like nothing.”

While McGregor briefly ventured outside the Octagon to get a closer look at Aldo, the two featherweights were supposed to face off inside the cage, as well. Instead, Aldo conducted a brief interview with UFC analyst Joe Rogan near the announcer’s table. According to White, there was a very specific reason behind Aldo’s reluctance to enter the Octagon.

“He [Aldo] wants this fight so bad. He loves this fight,” White said. “Tonight we wanted him to get up in the Octagon. He’s superstitious. He will not set foot in the Octagon unless it’s a fight.”

“It’s another word for fear. He should have come into the f-----g Octagon,” he said at the post-fight press conference.

Lost amid all the hype surrounding the future showdown with Aldo was McGregor’s dissection of Siver. The Russian-born German was overwhelmed by the power, speed and technique of his opponent. In the first round, McGregor battered Siver with left hands and kicks, badly damaging his foe’s left eye.

By the end of the frame, the outcome seemed like a foregone conclusion. McGregor floored Siver with another left hand in round two before sealing the victory with elbows and punches from full mount. About the only thing Siver was able to deny McGregor was a glove touch at the outset of the bout.

“He hit me and I’m like, ‘What’s this. What the f—k is this?’ He’s supposed to be a big kicker, he’s supposed to be loose. He’s stocky, he’s built. He had nothing for me,” McGregor said. “He has wins up at lightweight, he has wins up at welterweight. He has more UFC fights than I have MMA fights, period. But they feel small and they feel weak and they feel like nothing to me. I gave a little opportunity to touch the glove, and he backed out of it, so that was it.”

The UFC has put plenty of muscle behind promoting McGregor as the next big thing. Through five fights, the Dublin native has delivered on what the company has been selling. With a title bout on the horizon, the hype can only grow.

“This kid’s a huge superstar. He’s got that special gift,” White said. “When I first met him, I knew he was a great personality. I wondered if he could fight. Boy, he can fight.”