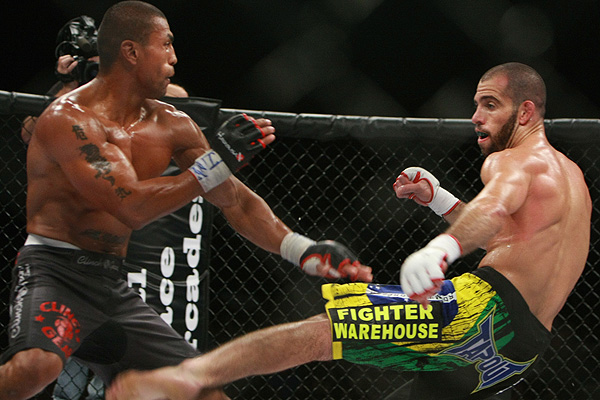 Junior Assuncao [pictured: right] will not compete as expected at Legacy Fighting Championship 13, as the UFCveteran has withdrawn from his Aug. 17 meeting with Douglas Frey due to a recurring elbow injury. In his stead now steps “Ultimate Fighter” Season 15 alumnus Chris Tickle.

Legacy promoter Mick Maynard informed Sherdog.com of the switch on Thursday. LFC 13 takes place at the Dallas Convention Center as part of the 2012 Europa Get Fit and Sports Expo and will be highlighted by a double main event, as Will Campuzano locks horns with Jimmy Flick for the Texas-based promotion's vacant flyweight title, while Jared Rosholt meets Derrick Lewis for the vacant heavyweight strap. The evening's main draw airs live on AXS TV.

Tickle, 30, introduced himself to UFC fans during his lightweight stint on “TUF 15.' After submitting to Joe Proctor in the semifinals of the competition, Tickle made his official Octagon debut on June 1 at the season finale, falling by unanimous decision to Daron Cruickshank. “Bad Boy” returns to the featherweight division for his clash with Frey, which marks the 13th pro outing of Tickle's four-year career.

Frey, 29, enters the cage sporting an edge in experience with 18 pro fights to his credit. However, the Texan has lost five of his last seven bouts heading into his inaugural Legacy appearance, most recently suffering a technical knockout defeat at the hands of prospect Rad Martinez on March 23 at Bellator 62. Frey is a seven-time Shark Fights veteran and holds nine of his 10 career wins by either knockout or submission.