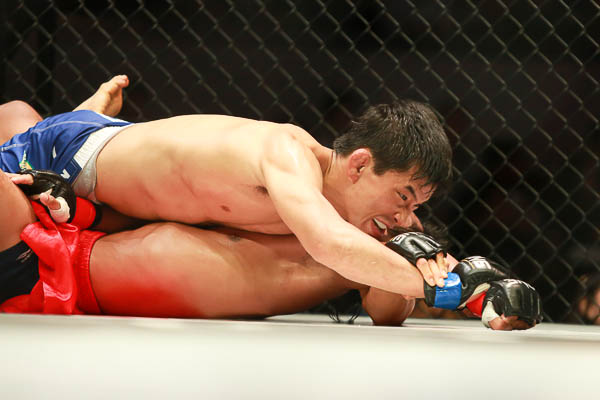 Masakatsu Ueda is known for controlling opponents on the canvas. | Photo: Taro Irei/Sherdog.com


Masakatsu Ueda will make his first appearance in the Pancrase cage on July 5, when the former Shooto world champion is set to face Brazilian talent Luis “Betao” Nogueira.

The bantamweight matchup, which will be part of Pancrase 268 at Tokyo’s Differ Ariake arena, was announced Sunday during Pancrase 267 at the same venue. Ueda-Nogueira will feature in a four-bout “Japan versus Brazil” series on the show’s main card, as will a previously announced flyweight tilt between Hiroki Yamashita and Rildeci Lima Dias.

Ueda, 37, will attempt to halt the first losing streak of his career, having dropped bouts against Bibiano Fernandes and Victor Henry over the past 12 months. The onetime world-ranked bantamweight went unbeaten in the first 12 bouts of his professional career before being upset by Shuichiro Katsumura in 2010. A former collegiate wrestler, Ueda holds notable wins over the likes of Eduardo Dantas, Kyoji Horiguchi and Jens Pulver.

Nogueira, 33, will look to extend his current winning streak to five in a row. The seven-time Bellator veteran signed a multi-fight deal with Pancrase in March and has since picked up a win in Brazil, taking a unanimous decision against Hemerson Hubaldo on April 24.