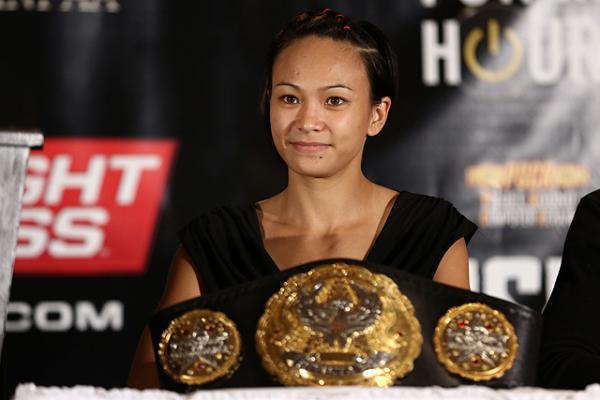 Michelle Waterson is establishing herself as Invicta’s most prominent talent. | Dave Mandel/Sherdog.com


When Michelle Waterson had more than a year-long lull after her upset victory over Jessica Penne, the Jackson-Wink MMA representative would often vent about the lack of activity to her coaches.

Greg Jackson’s response: “Be careful what you wish for.”

Waterson was frustrated that she was unable to capitalize on the momentum generated by her memorable bout against Penne, a 2013 “Fight of the Year” candidate that earned her the Invicta Fighting Championships atomweight belt. Little did she know how crowded her schedule would eventually become.

Just three months after Waterson successfully defended her crown with a third-round technical knockout over Yasuko Tamada on Sept. 5, “The Karate Hottie” has been called into duty again, this time against Herica Tiburcio in the Invicta FC 10 main event on Friday night.

It is a headlining spot that was originally intended for Cristiane “Cyborg” Justino, who was expected to make her bantamweight debut on the card. When an injury to the ex-Strikeforce featherweight queen put those plans on hold, it was Waterson who agreed to fill the void atop the marquee on five weeks’ notice.

While Cyborg’s quest for a comfortable weight cut and an eventual date with UFC champion Ronda Rousey holds limitless intrigue, it is Waterson who has established herself as Invicta’s centerpiece, headlining two of the promotion’s first three cards since it began streaming on UFC Fight Pass.

Waterson has been hearing the term “face of the promotion” quite a bit in recent days. She does not shy away from such a label.

“People have been saying that, and I definitely don’t mind taking that title,” Waterson told Sherdog.com. “I love Invicta. I think they represent women athletes and women’s MMA perfectly. I’m very happy to represent Invicta and be the face of it.”

That, in part, made a compressed camp worthwhile for Waterson, who also had to juggle her training with the responsibilities of being a mother in the middle of the holiday season. At the very least, it beat the alternative: another lengthy layoff.

“I was jamming everything in -- trying to get ready for it,” she said. “Not necessarily to get in shape for it; I stayed in the gym after my last fight. Just like all the preparations for my sponsors, the interviews and getting everything ready.

Waterson was in top form in her first title defense, as she dominated Tamada with a variety of kicks and vicious knees from the clinch. Tamada, finished for the first time in her 27-fight career, struggled to make the bout competitive.

That could be a recurring theme at atomweight. Some of the division’s top talent, including Penne, have moved up to 115 pounds in hopes of landing a spot on the UFC roster. Waterson remains confident that the promotion can find her worthwhile opposition at 105 pounds as her reign extends.

“Invicta is slowly building their roster, and they’re working really hard to pull girls from all around the world. I have no doubt in my mind that there are contenders for me to fight in the future,” she said. “To me everybody in the 105 weight class is gunning for me, so I’m not trying to call anybody out. For the most part, I’m the one with the target on my back.”

The lure of the Octagon for 105-pound athletes looking to move up in weight can make matchmaking a challenging endeavor. Like Tamada before her, Tiburcio is getting a shot at the belt in her promotional debut.

However, the Brazilian submission specialist was already someone on Waterson’s radar even before the fight was announced.

Having already experienced a couple of lengthy layoffs thus far in her career, Waterson says she would like to fight two or three more times in 2015. At 28 years old, her athletic prime is just beginning.

I feel like with each fight I get better, I learn something new and I’m able to implement new game plans each time....There’s always something new to learn,” Waterson said.