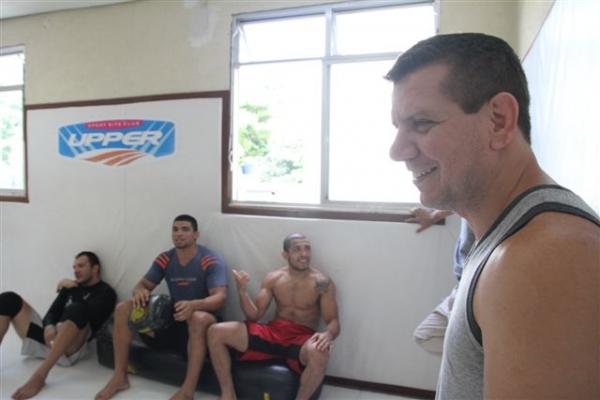 Sherdog.com: Did everything go as expected in Barao’s fight against Urijah Faber?
Andre Pederneiras: The strategy we devised worked very well, from the weight cut to the fight. Everything was 100-percent. It only could have gone better if he had scored a knockout, as we planned, but he hurt his foot on Faber’s knee or shin early in the second round and he couldn’t kick with his right leg. We planned on kicking the legs a lot, and that ended up killing one thing he would have done. Today, he’ll take some tests to see how the foot is. The fight lacked a knockout, but we have to take our hats off to Faber. I had already spoken to him before and he is an American with the heart of a Brazilian fighter.

Sherdog.com: One of the most impressive things in the fight was Barao’s dominance during all five rounds. He wasn’t threatened at any time.
Pederneiras: In studying Faber’s fights, we saw that he gets stronger when he takes control of the fight. If you begin to pressure him and make him move backwards, he can’t do that. So, when he attacks and you counter, he begins to walk back and lose himself a little. That’s what we were able to do and everything worked out, with Barao chasing him all the time.

Sherdog.com: After the fight, some outlets reported that Barao will defend his interim title before fighting against champion Dominick Cruz. Is that true?
Pederneiras: Actually, Dana [White, UFC president] said he would face Dominick, and then a reporter asked Barao if he would fight before then, if Dominick stayed out for too long. Barao said he would accept another fight because he’s a UFC employee, but in my opinion, that shouldn’t happen. The next fight should for the belt against Dominick.

Sherdog.com: Barao’s title also served to crown your partnership with Jair Lourenco, the leader of Kimura/Nova Uniao in Natal, Rio Grande do Norte.
Pederneiras: Absolutely. We’ve had a long partnership not only with Jair, but with several Nova Uniao branches throughout Brazil, and when an athlete is interested in migrating to MMA, he comes to Rio de Janeiro to train with us. Jair sends these fighters, as does Guilherme Santos and Nonato Machado from Manaus, which is an even older partnership than that of Jair. From there came Marcos Galvao, Jose Aldo and “Kiki” [Arlisson Melo]. We always had a great relationship with our gyms throughout Brazil, and Jair especially, since he is always here to bring his athletes. His students are very tough and I think Barao would have been a champion regardless of having trained here, because he’s a top athlete. Jair gets all the credit for this achievement.

Sherdog.com: Jose Aldo is expected to face Erik Koch at UFC 153 in Rio. Is he recovered from the injury that kept him out of UFC 149?
Pederneiras: He has returned to training. He keeps doing physical therapy, even without pain, just to avoid any risk. That was a request from his physical therapist and I also agreed. He’s not on pace to train very hard because the time hasn’t arrived yet, but he’s doing all the groundwork without pain and everything is OK.