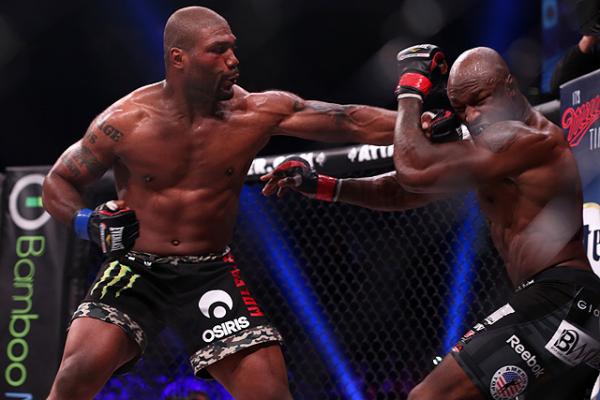 Jackson took a contentious unanimous decision over Muhammed Lawal in the Bellator MMA Season 10 light heavyweight tournament final at Bellator 120 on Saturday at the Landers Center in Southaven, Miss. All three cageside judges scored it the same: 29-28 for Jackson (35-11, 3-0 Bellator).

“Rampage” had issues staying upright in the first round, as he surrendered multiple takedowns to the former Strikeforce champion. Lawal (12-4, 4-3 Bellator) lost much of his steam in the second, allowing Jackson to bring his formidable boxing skills and power punching into play. By the conclusion of the middle frame, “King Mo” was sporting visible damage -- a cut and noticeable swelling -- to his left eye. Round three was far from easy to call. Lawal scored with a takedown inside 90 seconds and controlled “Rampage” for more than a minute. However, Jackson returned to his feet later in the round and resumed his assault with his fists, perhaps swaying the judges with his final push.

“He did better than I thought he was going to do,” said Jackson, who clinched a title shot against current Bellator light heavyweight champion Emanuel Newton. “‘King Mo’ is a warrior. He came right out and tried to take me down, just like I thought he would. Rematch. I’m not happy with my victory tonight. I wanted to knock ‘King Mo’ out. I won’t be satisfied until he’s down on this Bellator mat sleeping.”

Lawal was not happy with the verdict and pleaded his case to Bellator CEO Bjorn Rebney.

“Bjorn, you know what’s up, man,” he said. “You know you didn’t win that fight, all smiling and s---. ‘Rampage,’ nothing against you. I beat you, though. You know it, and your corner knows it. I won that fight; and Bjorn, cut me if you don’t like me. You know I won that fight.” 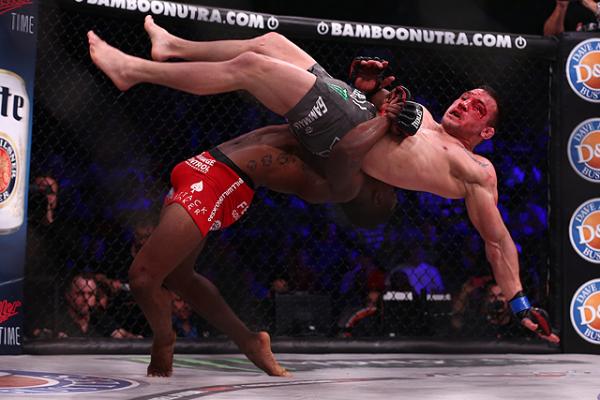 Photo: D. Mandel/Sherdog.com
Brooks shocked Chandler with his wrestling.
American Top Team’s Will Brooks captured the interim Bellator lightweight championship with a narrow split decision over the world-ranked Michael Chandler in the co-main event. All three cageside judges scored it 48-47, two of them siding with Brooks (14-1, 6-1 Bellator).

Brooks staked his claim in the third and fourth rounds. In the third, the 27-year-old secured a takedown, moved to Chandler’s back more than once, fished for rear-naked chokes and punished him with heavy ground-and-pound from the mount. Brooks was also the superior fighter in the fourth frame, where he again transitioned to the Alliance MMA standout’s back and piled up points with
effective ground-and-pound.

“I was like, ‘I don’t think I can hit this dude any cleaner than I [have been.]’ I looked in his eyes, and I saw a dude who has been a champion for a long time,” Brooks said. “He’s still a champion. I’ve got all respect for that man.”

Chandler (12-2, 9-2 Bellator) -- who struck for takedowns in each of the first two rounds -- closed with a flourish, as he staggered the Chicago native with a three-punch burst in round five, dove into top position and threatened with a mounted arm-triangle choke. However, it was not enough to bring him the desired victory. Chandler, 28, has lost his last two fights after starting his career with 12 consecutive wins.

“I fought the worst performance of my life,” he said. “There were a lot of different things going on. Congratulations to Will. I’ll be back stronger.”

“This is an amazing thing to have, but I’ve been waiting for the opportunity to come out here and slug it out with somebody,” he said. “I’ve been trying to get better as a fighter, and it was just fun. At one point, I wasn’t even concerned about the belt.” 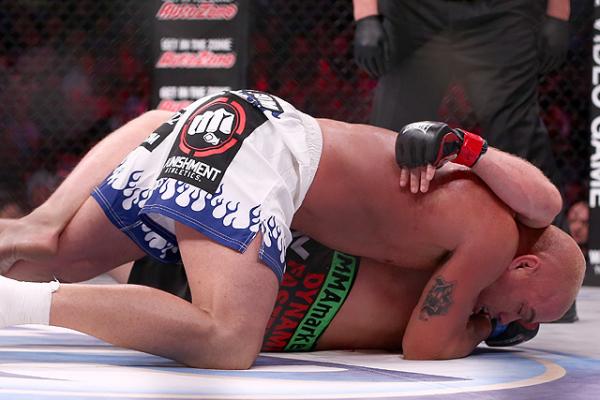 Photo: D. Mandel/Sherdog.com
Ortiz put Shlemenko to sleep easily.
UFC hall of famer Tito Ortiz rendered reigning Bellator middleweight champion Alexander Shlemenko unconscious with a first-round arm-triangle choke in a non-title bout at 205 pounds. Shlemenko (50-8, 11-2 Bellator) went to sleep 2:27 into round one, his 13-fight winning streak a thing of the past.

Ortiz (17-11-1, 1-0 Bellator) weathered the Russian’s initial advances, absorbing several kicks and punches to the body. He secured a takedown roughly two minutes into the first frame, slid into position for the arm-triangle choke and waited for Shlemenko to black out. Ortiz, 39, had won just one of his previous nine fights.

“Guess who’s back? I worked hard as hell for this,” he said. “I’m just inspired to inspire others and show you guys what hard work and dedication can achieve. I went over this over and over. I’ve gone through so many surgeries and had my back pressed against the wall, and people counted me out.” 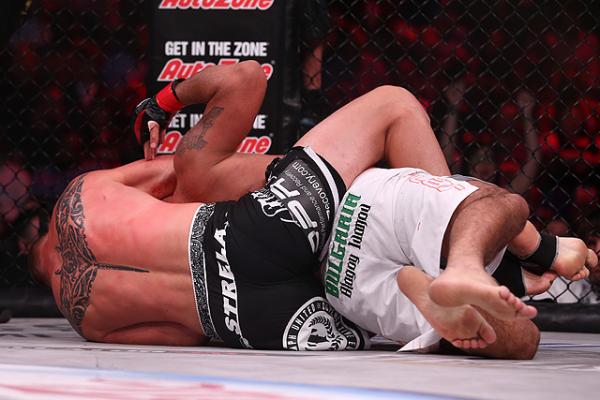 Ivanov (11-1, 6-1 Bellator) executed his game plan through much of the first five minutes, as he punched his way into clinches and landed clubbing punches off the breaks. However, Volkov seemed to turn the corner towards the end of round one, and the Bulgarian began to fatigue.

In the second round, the Russian countered a failed takedown from Ivanov, transitioned to his back and cinched the tournament-clinching choke. The tapout soon followed.

“It’s a great pleasure for me to win this way,” said Volkov, who clinched a shot at the Bellator heavyweight crown currently held by Vitaly Minakov. “I was preparing for this fight, and I knew I was going to fight against a specialist in sambo. I had a slight injury in my ribcage, so I was afraid of this position against the cage, but I knew he would get tired eventually. I just took this opportunity and finished him.” 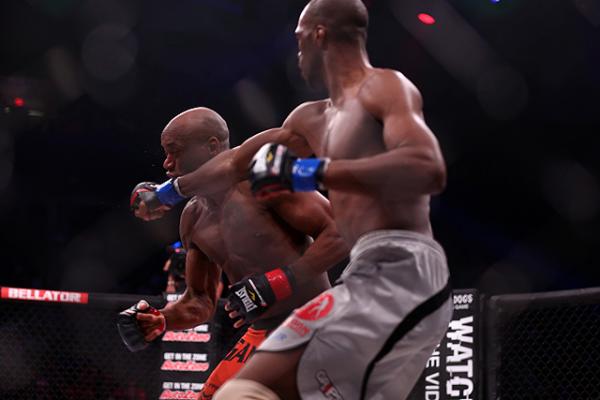 Photo: D. Mandel/Sherdog.com
Page looks like the real deal.
Flashy London Shootfighters export Michael Page kept his perfect professional record intact, as he knocked out an overmatched Ricky Rainey in the first round of their welterweight showcase. Page (6-0, 2-0 Bellator) drew the curtain with a perfectly timed and placed overhand right 4:29 into round one.

Rainey (8-3, 1-1 Bellator) never threatened the Englishman. Page peppered him with punches from the perimeter, showboating as he went. The charismatic karateka set Rainey on shaky legs early in the match and proceeded to pick him apart with clean, accurate punches.

Late in the round, Page sent the Xtreme Fighting Championships alum crashing to the canvas with an overhand right above the ear. No follow-up blows were necessary.

“I felt in control the whole time,” Page said. “I came to put on a show. I think I proved why I’m supposed to be here. I’m going to come back, and I’m going to do it again and again. This is the stuff I’ve been practicing all the time. I knew I had his game. Once I got in here and felt him out, I knew I had that [overhand right].”

Page has finished all six of his opponents inside one round.

“I want to take my time in this sport and grow properly,” he said. “When you do see me matching up against [the best], I’ll be ready. Right now, I’m still growing.” 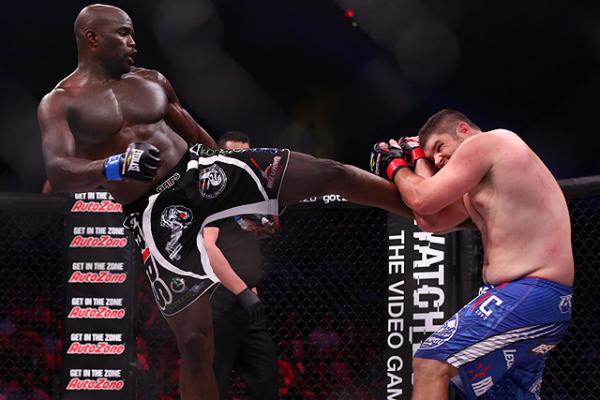 Smith (6-2, 0-1 Bellator) had his moments -- he scored with a first-round takedown -- but ran out of gas near the conclusion of the first round. Kongo turned the tide with savage body kicks before swarming with punches, knees and elbows. In the second, the French kickboxer delivered a takedown of his own and unleashed his ground-and-pound.

Smith slowly wilted. He eventually returned to his feet, only to meet his end with a series of punches and knees. 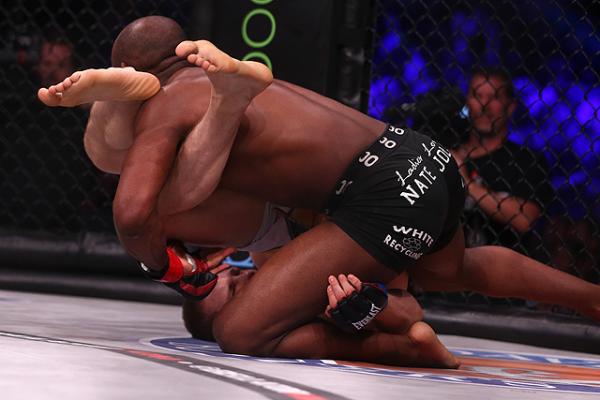 Photo: D. Mandel/Sherdog.com
Held caught Jolly with an armbar.
Polish leg lock specialist Marcin Held submitted Nate Jolly with a first-round armbar in an undercard tilt at a 158-pound catchweight. Jolly (13-6, 0-1 Bellator) tapped out 4:20 into round one, submitting for the first time since succumbing to a Dustin Poirier armbar nearly five years ago.

Held (19-3, 8-2 Bellator) engaged in a wild early exchange with his 31-year-old adversary, as fists flew. A knee strike from the Brazilian jiu-jitsu black belt wobbled Jolly before the action spilled onto the canvas on the end of a Held takedown. The Pole moved to Jolly’s back, set his hooks and searched for chokes.

None materialized. Jolly later reversed into top position and uncorked standing-to-ground punches. However, he left his arm vulnerable, and Held pounced on the submission.

The 21-year-old Held has won nine of his last 10 fights, seven of them finishes. 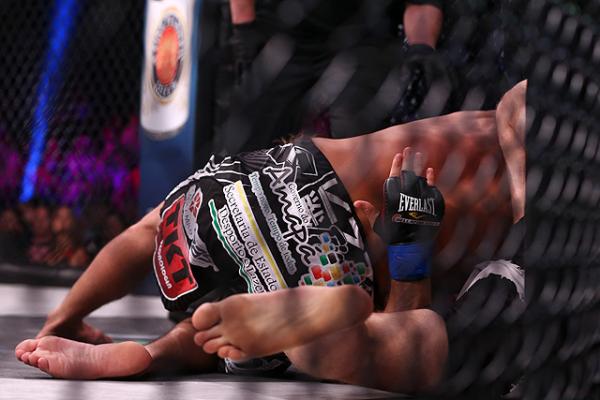 Da Silva (20-3, 2-2 Bellator) kept the Dagestani at a distance with winging punches before forcing him to the mat in a scramble. Once there, the Brazilian judoka softened Shamhalaev with hammerfists and elbows before setting up the kimura for the finish. Da Silva, 23, has won 10 of his past 13 bouts. 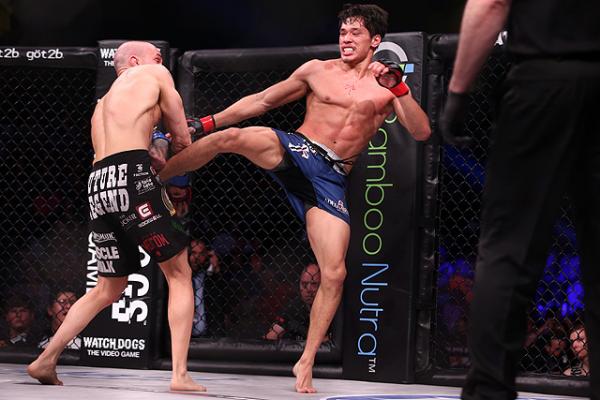 Photo: D. Mandel/Sherdog.com
Yamauchi snatched two rounds from Richman.
Promising Brazilian prospect Goiti Yamauchi won for the 12th time in 13 appearances, as he captured a unanimous decision over The Academy’s Mike Richman in a competitive undercard battle at 145 pounds. All three cageside judges scored it the same: 29-28 for Yamauchi (17-2, 3-1 Bellator).

Richman (16-5, 5-4 Bellator) struggled with the variety of his 21-year-old counterpart. Yamauchi attacked the body and legs with effective kicks and unleashed multi-punch bursts to the head. He did his best work in the second round, where he swarmed Richman with his fists and struck for a trip takedown against the cage.

Though the Minnesotan answered with a strong round three -- Richman dove on an attempted guillotine choke and spent much of the final five minutes in top position peppering Yamauchi with ground-and-pound -- his efforts were not enough to dig him out of the hole he was in on the scorecards. 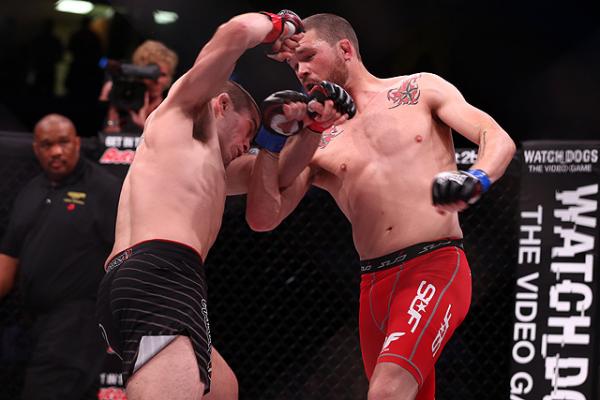