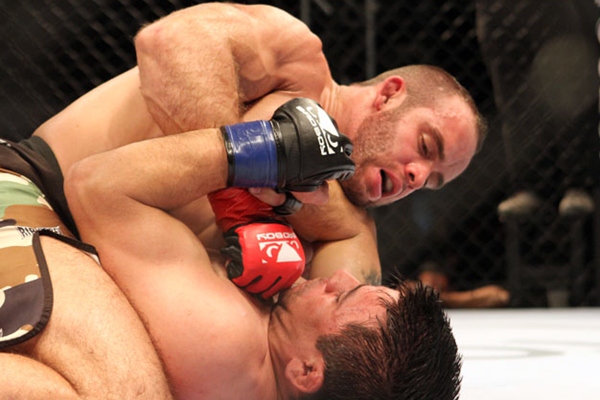 The state of Bahia is known for its boxing tradition, from former world champion Acelino “Popo” Freitas to UFC heavyweight contender Junior dos Santos. However, the 23-year-old Carioca is a stocky top position grappler, who again showed off his strong wrestling to take two one-sided, albeit lackluster decisions over Argentine Angel Orellana and Vitor Nobrega, punching his ticket to the finals.

In the finale, Santos met Goias native Julio Cesar dos Santos, who busted up Andre Muniz in the first round before his semifinal bout with Ricardo de Oliveira saw both men fall out of the cage. However, the bout was scored up until the accident, giving dos Santos the unanimous 20-18 technical decision win.

Carioca started slow in his fifth round of the evening, and was on the end of dos Santos' strikes. However, in the second round, the Baiano put his wrestling to good use again, and his foe simply had no answer for the grappling advantage. Dos Santos had to endure almost two full rounds with his back against the canvas and lost the unanimous verdict.

“That was the first time I wanted to fight in a grand prix,” said Santos after his tournament triumph. “It’s good to know that I can fight that many rounds in one night. Hopefully that will get me an invitation to fight outside Brazil.”

With the trio of wins, the Ze Mario Team product pushes his record to an unbeaten 12-0 and solidifies himself as one of the top prospects in all of Brazil at a moment where the nation’s best young talents are quickly filling the ranks of UFC, Strikeforce and Bellator.

On top of winning the promotion’s middleweight belt, Santos also took home an $18,800 prize, and possibly a chance to be called to fight outside Brazil. However, Santos is first scheduled for action on Sept. 16, as he is expected to defend his middleweight title for Bahia’s top promotion, Win Fight and Entertainment, against a yet-to-be-named opponent. 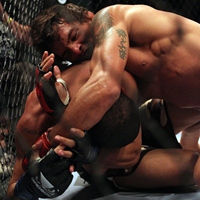 G. Venga
‘Miltinho’ choked Bruno ‘Cro Cop.’
In the evening's non-tournament feature fight, Brazilian Top Team standout Milton Vieira made quick work of Bruno “Cro Cop” Lobato not with his trademark anaconda choke, but by sinking it on the other side with a brabo choke for the win.

After a brief feeling out process, Vieira, who famously introduced the Nogueira brothers and his other former BTT teammates to the anaconda choke, managed to take Lobato down and secure a front headlock. From there, “Miltinho” easily got him to tap by way of the brabo choke in just 83 seconds.

“I really needed that win. After my last fight, I spent five months injured and was just waiting for the right offer,” Vieira said after the bout. “When Bitetti called my name, I knew it was the right opportunity to come back.”

In the only other fight that was not a part of the evening’s tournament, “Pelezinho” Danilo Patusco overcame newcomer Pablo dos Santos. After what a very slow round in which it became clear that dos Santos was overmatched by his opponent, Patusco managed to get dos Santos against the cage and stop him with punches with only two seconds left in the first period.

In a curious note, the middleweight grand prix did not have a reserve bout. An originally scheduled match-up between Gerson Cordeiro and Celso Ricardo da Silva was canceled at the 11th hour. Tiago Tosato was expected to fill into the reserve bout, but an opponent couldn't be found who could make it to the venue in time.