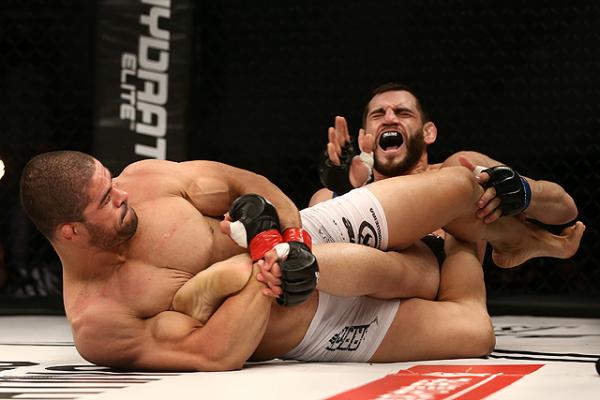 
This time, it took just 90 seconds for Rousimar Palhares to leave his calling card.

In the headliner of World Series of Fighting 16 from the McClellan Conference Center in Sacramento, Calif., the WSOF welterweight champion made a successful first defense, forcing longtime welterweight standout Jon Fitch to scream out in pain, tapping to a kneebar at just 1:30 of the very first round.

Fitch was able to flex his striking advantage as the bout began. While Fitch was able put his boxing to use hitting Palhares early, when he stuffed the Brazilian's first takedown attempt, it presented an opportunity that a leglock expert like “Toquinho” would consider a gift. Palhares went from a heel hook, to an Achilles lock to a kneebar to force the submission, which left Fitch down on the canvas for several minutes. 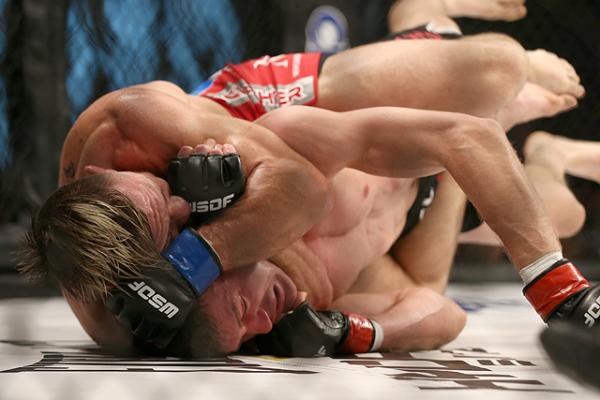 It was a less than riveting start by both fighters, but after a tepid beginning, the southpaw Palmer found success with his left hand, tagging “The Gladiator” late in round one and throughout round two. The defending champion would look to be the aggressor in the third stanza, but was not long for the round: after a strong start, Glenn was tossed on his back by a blast double from Palmer, quickly had his back taken and was forced to tap to a rear-naked choke. The official time was 3:09 of the third round for the Team Alpha Male prospect's title capture.

Highly-touted bantamweight prospect Sheymon da Silva Moraes (7-0) was met with very real resistance in the form of Gabriel Solorio (11-8) in his promotional debut, squeezing out a split decision (30-27, 29-28, 28-29) over three rounds. The Brazilian showed much of his traditional muay Thai game, but Solorio was game to answer his strikes over the 15 minutes. During the middle period, the American began landing with clean and hard with overhand rights, backing Moraes up and even nearly armbarring him once. In the final round, Moraes and Solorio went blow for blow, and while Moraes showed superior kicking and clinch skills, Solorio rocked Moraes with the overhand right on several occasions in the final frame.

At 170 pounds, Lewis Gonzalez won a contentious split decision over UFC veteran Justin Buchholz (30-27, 29-28, 28-29). Gonzalez finished well behind his powerful right hands, but early on, Buchholz's teeps and low kicks controlled the the fight and the Team Alpha Male fighter nearly finished Gonzalez from back mount in the second frame.

Skrap Pack featherweight Josh Berkovic used his speed and wrestling advantage to take a unanimous decision (29-28, 29-28, 29-28) victory over Hawaii's Brenson Hansen. It seemed as though it was going be smooth sailing for the from fighter San Francisco, until an overhand right from Hansen badly hurt him halfway through the fight. It was a mere road bump, however, as Berkovic stayed glued to his man with takedowns and took any striking advantage away. 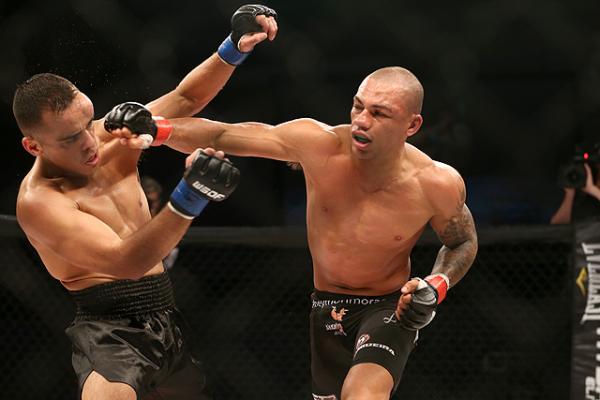 (+ Enlarge) | Photo: D. Mandel/Sherdog.com
Moraes' debut was victorious.
Personable and popular local Dave Huckaba got back in the win column, putting a two-round beating on 300-pound super heavyweight C.J. Leveque. The “Bad Man” would take much of the first round off, picking his shots and waiting to strike, a tactic, which paid dividends in the second frame, where he crumbled Leveque with an uppercut and beat him with punches and knees until referee Milton Wallace called the action at 1:47.

In a 188-pound catchweight contest, UFC veteran David Mitchell ran over Justin Baesman, getting his back and securing the rear-naked choke at just 1:44 of the first round.

In another catchweight affair, this at 176 pounds, Portland, Ore.-based Californian Dominic Waters used heavy kicking and steady takedowns to outlast Martin Sano, earning a unanimous decision (30-27, 29-28, 29-28) in a contest largely fought in the clinch.

Team Alpha Male featherweight Erick Sanchez used aggressive punching and multiple takes of the back to earn a unanimous nod (30-27, 29-28, 29-28) over Drey Mitchell, while his flyweight teammate Joseph Morales did likewise, wearing down Christian Espinosa with his superior wrestling for scores of 30-26, 30-27 and 30-27.

At 145 pounds, Paradise, Calif.'s Jason Powell easily swept all three rounds on the scorecards against Chris Avila behind his jab, leg kicks and takedowns.