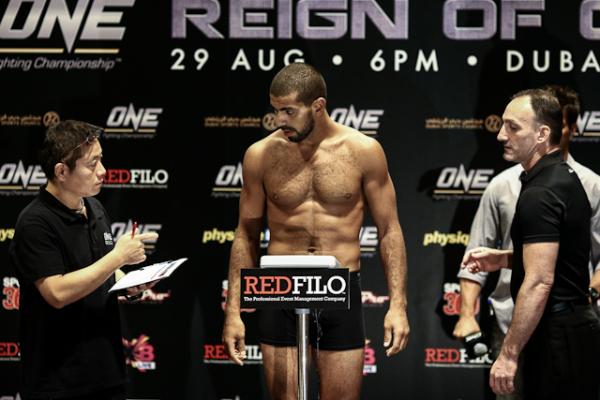 Repetitive, physical work is almost always done by foreigners in the United Arab Emirates. Mixed martial arts is no exception, and it is difficult for a place to produce homegrown fighters when immigrants outnumber the indigenous population by approximately five to one.

However, as the country, which consists of seven emirates, primes to play host to one of the most significant Asian MMA events of the year, there is one fighter preparing to fly the flag for the host nation. Mohamed Walid, 21, will be the sole UAE representative at One FC 19 “Reign of Champions” on Friday at the Dubai World Trade Centre in Dubai. Walid, who was born and bred in the host city, believes he was simply following family tradition by becoming a fighter.


Advertisement
“I come from a martial arts family,” Walid told Sherdog.com. “My father is a ninth-degree black belt in karate and owns a gym in the center of the city called Khulood Club -- the oldest karate club in Abu Dhabi, if not all of the UAE. Everyone in the family starts karate at 5 years old.”

“Reign of Champions” on paper is the best card One Fighting Championship has ever put together and features three title fights, with both Shinya Aoki and Ben Askren on the lineup. However, for local fans, Walid’s bout with Vaughn Donayre could be the highlight of the night. The reigning Dubai Fighting Championship welterweight titleholder, Walid owns a 3-0 professional record, having transitioned to MMA in 2010 after a successful run on the Brazilian jiu-jitsu circuit. His debut in One FC represents an enormous opportunity for Walid to make a name for himself.

“When I saw that One FC [was] coming, I was hoping they [would] use some fighters from the region because [the] UFC was in Abu Dhabi twice but never put on any local fighters to sell the show,” he said. “When I received a phone call from [Contender Gym and Dubai FC founder] Tam Khan asking me if I want to join One FC, it was a dream come true.”

Walid’s martial arts ancestry can be traced back to Lebanon, where his father, Walid Hassan Merii, persisted in pursuing a love of combat sport despite encountering resistance from his own parents.

“I was interested in martial arts since childhood, but my mother, God bless her soul, did not want me to train, and she used to burn my kimono to make the water warm so we could have a bath,” Merii said. “I started in tae kwon do [and] then moved to Kyokushinkai karate with my teacher, Ahmed Abo Kazal. When I moved to the UAE, I started teaching to make some money, besides my job, and later I was sponsored by a family in Abu Dhabi to move to Japan for two and a half years to learn under Master [Masutatsu] Oyama and Kancho Soeno.”

While Walid has only ever known a peaceful life inside the UAE, his father has experienced firsthand the trauma of being made a refugee by war.

“I was raised in Lebanon and lived there all my childhood, but when I was 17 years old, I left Lebanon because the civil war was going on and I needed to come to a more peaceful place so I could raise my family,” Merii said. “Thirty-five years later, I am still in this beautiful country.”

Peace will be the last thing on Walid’s mind when he takes on Donayre at a 167-pound catchweight. Both men are based in the UAE, but Walid admits he was not familiar with his Filipino counterpart before being offered the fight.

“I had not heard of him until Tam Khan mentioned his name,” Walid said. “He has a lot of strengths but many weaknesses, just like any fighter, and I will show the fans what his weaknesses are in this fight.”

An Englishman of Afghan descent, Khan is a pioneer on the MMA scene in the Middle East. No one has a better handle on the local fighters in the region, and he has known Walid since the undefeated welterweight was a teenager.

“I met Walid and his brother when I was fighting in [Abu Dhabi Fighting Championship organization] in 2010,” Khan said. “They were good kids, respectful, and then later he was a runner at the ADFC events, so I saw him a lot when I was coaching my fighters; and the rest is history.”

From Askren to reigning champion Nobutatsu Suzuki, there are some big names occupying the 170-pound division in One Fighting Championship. Khan believes Walid can hold his own.

“I think he will do great,” Khan said. “I see Walid making huge waves in the organization. He is relentless, doesn’t stop at all, scrambles constantly and will not give in. He has a heart, and that you cannot teach. Plus, he is very confident and believes he is unbeatable. You can see that when he fights. He has a confidence that he will win; it’s just a matter of how or when.”

Khan expects Walid to receive a positive reception from the crowd and thinks it is important for local fans to have a homegrown talent they can back.

“One FC as a promotion is always looking at local talent and supporting it, and he is the first UAE resident to be signed to such a huge promotion,” Khan said. “It’s so important because he will have all the UAE support on the night, as well as carrying the flag and representing this great nation.”

Walid faces plenty of pressure as he prepares to fight an opponent with a 7-1 record and a strong reputation in the Philippines. His father provides a constant reminder of the importance of this opportunity.

“I am so excited to see him fighting in One FC, and I hope he understands that it’s another level in his life,” Merii said. “Winning is a must.”

Walid relishes the chance to compete under the One Fighting Championship banner in his homeland.

“The fans here know me,” he said. “They -- the crowds -- like to see a fight, and no one is better than me at giving them a show. I feel great and excited to fight for one of the biggest organizations in world in my home of the UAE.”
Related Articles
Latest News
ALLUFCBELLATORPFLONE