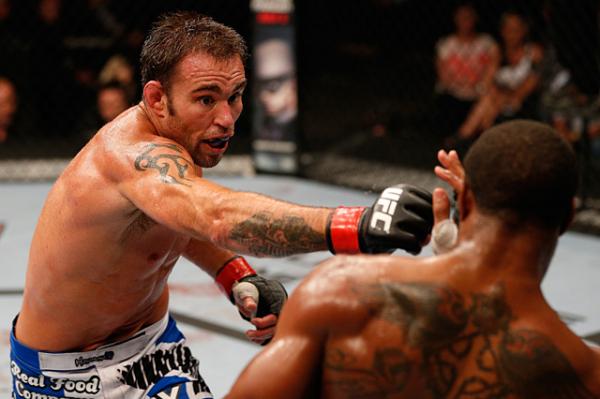 Kicks, knees and a relentless clinch game pushed the former Shooto, Strikeforce and EliteXC champion to a split decision over Woodley at UFC 161 “Evans vs. Henderson” on Saturday at the MTS Centre in Winnipeg, Manitoba, Canada. Two of the three judges scored it 29-28 for Shields (28-6-1, 3-2 UFC); a third cast a dissenting 30-27 vote for Woodley.

The 34-year-old Shields sucked the American Top Team export into his world over and over again, as he wore down the two-time NCAA All-American wrestler in the clinch. Woodley came through in spurts -- he landed a searing spinning back fist in the third round -- but never mounted a sustained offensive against the Cesar Gracie Fight Team representative.


James Krause made a successful entry into the UFC’s lightweight division, coaxing a tapout from Sam Stout with a third-round guillotine choke in an undercard tilt at 155 pounds. Stout (19-9-1, 8-8 UFC) reluctantly conceded defeat 4:47 into round one, as he was submitted for the first time in nearly seven years.

A replacement for the injured Isaac Vallie-Flagg, Krause (20-4, 1-0 UFC) established himself from the start. He controlled the standup exchanges with his length and kept the Canadian kickboxer at bay. The 27-year-old World Extreme Cagefighting veteran delivered the most decisive blow of the bout in the first round -- a head kick that left Stout with a nasty gash near his right eyebrow. The blood flowed, covering the right side of his face and staining Krause’s white shorts pink.

Stout turned the tide in round two, where he went to the body with great effect and bullied Krause to the ground with a takedown. Krause turned to leg kicks in the third round, mixed in a nice jab and countered a late takedown from Stout with the arm-in guillotine. The 29-year-old fought to free himself but ultimately succumbed to the choke.

Krause has won eight fights in a row, six of them finishes. 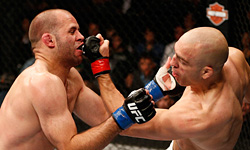 
Toronto’s Sean Pierson rode crisp counterpunching and a strong sprawl to a majority decision over Kenny Robertson in a preliminary welterweight clash. Two of the three judges saw it 29-29 for Pierson (14-6, 4-2 UFC); a third scored it a 28-28 draw.

Pierson was in command for much of the first two rounds, as he neutralized his opponent’s takedown game and racked up points on the feet with effective counters.

One strike altered the flow of the match at the outset of round three, as Robertson cracked the Canadian with an exquisite standing elbow and swarmed with punches for a potential finish. Pierson somehow weathered the assault, but Robertson transitioned to his back, fished for chokes and did enough damage to secure a 10-8 round on one of the scorecards.

A replacement for the injured T.J. Waldburger, Robertson (12-3, 1-3 UFC) has lost two of his last three fights.

Figueroa (9-3, 2-3 UFC) had his moments, as he threatened the Canadian with a triangle choke in the second round and whacked him with some heavy ground-and-pound late in the third. However, the 28-year-old McKinney, Texas, native simply could not stay on his feet long enough to get his standup in gear. Delorme dragged him to the ground in all three rounds, transitioned to his back with surprising ease and compromised his guard with little resistance.


Mitch Clarke threw the brakes on a two-fight losing streak, as he captured a unanimous decision over Tsunami Gym export John Maguire in a preliminary lightweight affair. All three cageside judges scored it the same: 29-28 for Clarke (10-2, 1-2 UFC).

Leg kicks and clinches were the Canadian’s weapons of choice, as he kept Maguire off stride for a majority of their 15-minute encounter. Maguire countered with takedowns and a handful of left hands but never completely turned the tide in his favor. Clarke closed with a flourish late in round three, sweeping into top position and delivering a stout standing-to-ground right hand.


A series of sweeps, takedowns and occasional ground-and-pound led Tristar Gym representative Yves Jabouin to a controversial split decision over “The Ultimate Fighter” Season 14 semifinalist Dustin Pague in an undercard scrap at 135 pounds. All three judges struck 29-28 scorecards, two of them siding with Jabouin (19-8, 4-2 UFC).

Pague (11-8, 1-4 UFC) seemed to do enough to win. The 25-year-old Virginian mounted Jabouin in all three rounds and threatened him with a relentless string of submissions from his back. Still, the judges honored the Haitian-born Canadian’s top game and his ability to wiggle free from danger.

Jabouin has won four of his past five bouts.