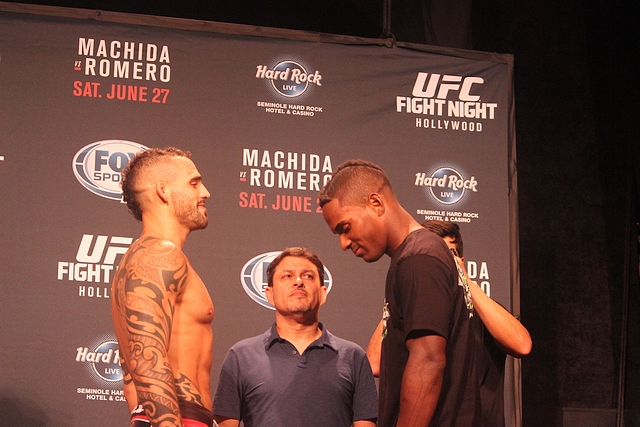 
The move to welterweight has worked wonders for Lorenz Larkin...

Larkin dispatched Santiago Ponzinibbio with punches 3:07 into the second round of their co-headlining welterweight tilt at UFC Fight Night “Machida vs. Romero” at Seminole Hard Rock Hotel and Casino in Hollywood, Fla., on Saturday night – his second straight triumph since dropping from 185 pounds. While “Monsoon” got the win, the action packed scrap paid dividends for both fighters, as Larkin and Ponzinibbio each pocketed $50,000 for “Fight of the Night.”

Meanwhile, Yoel Romero earned the signature victory of his career to date, as he garnered a $50,000 “Performance of the Night” bonus for his finish of Lyoto Machida in the evening’s main event. Early in round three, Romero took Machida to the canvas, moved to half-guard and unleashed a vicious barrage of ground-and-pound to secure the stoppage 1:38 into the frame.

Finally, Thiago Santos knocked Steve Bosse out cold with a left head kick 29 seconds into the opening round of their middleweight encounter to collect the evening’s other $50,000 “Performance of the Night” bonus. The Brazilian got Bosse to drop his guard with a kick to the body, then went high, connecting perfectly with his shin to flatten the former hockey enforcer.