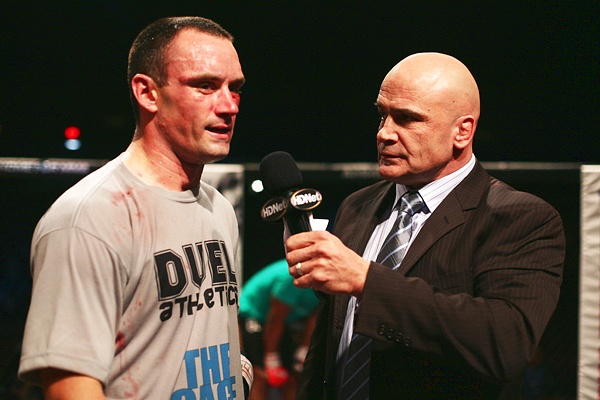 Legacy Fighting Championship welterweight titlist Jorge Patino has suffered a knee injury and will be unable to defend his belt against Jeff Rexroad in the main event of Legacy FC 14.

Sherdog.com confirmed the news Wednesday night with Legacy promoter Mick Maynard, who stated that Patino sustained a torn anterior cruciate ligament (ACL) in his knee. As a result, Rexroad (Pictured, left) will now square off with Lucas Pimenta Borges for an interim welterweight title in the Sept. 14 main event.

Beaten just once in six pro outings, Rexroad has not lost since July 2010, rattling off four consecutive wins for Legacy FC in his last four fights. The Texan has submitted both of his last two foes, choking out John Malbrough on Sept. 16 before finishing Larry Crowe with an armbar on Dec. 16 at Legacy FC 9.

Borges has also tasted defeat only once as a pro, falling by knockout in his very first bout. Since that setback, the Brazilian has posted eight straight victories, finishing five of his conquered foes by knockout. The welterweight has already fought thrice this year, stopping UFC vet Shamar Bailey on May 4 and doing the same to onetime Strikeforce talent Mitch Whitesel just two weeks later. Borges last fought on June 30, taking a unanimous verdict from Malbrough to win the UWF Tournament of Warriors in Corpus Christi, Texas.