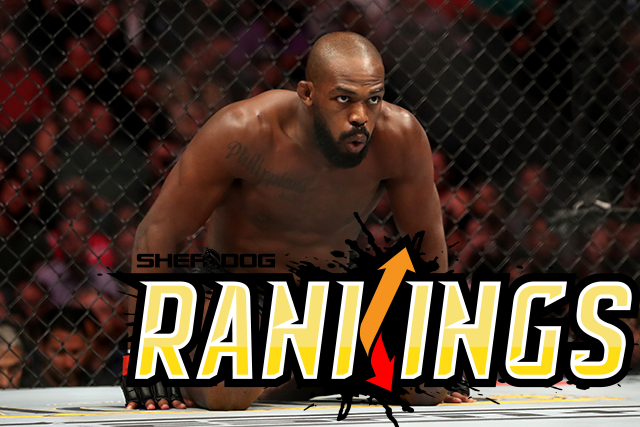 Two of the sport’s best maintained the status quo at UFC 239, but they did so in entirely different ways.

Jon Jones received a surprisingly stiff challenge from Thiago Santos in Saturday’s headliner at the T-Mobile Arena in Las Vegas, but he ultimately emerged with a split-decision triumph. While it wasn’t the reigning light heavyweight champion’s most memorable performance, he remains atop our light heavyweight rankings -- 13 victories in UFC title bouts is an impressive feat no matter how it happens.

Amanda Nunes retained her bantamweight crown in much more emphatic fashion, knocking out former champion Holly Holm with a head kick and punches 4:10 into round one of the co-main event. That’s nine consecutive triumphs for “Lioness,” who has been dominant against some of the sport’s best. A featherweight title defense against the Cristiane Justino-Felicia Spencer winner could be next for Nunes, who is the top-ranked female at 145 and 135 pounds.

Elsewhere, Jorge Masvidal made perhaps the biggest statement of all at UFC 239, knocking Ben Askren from the ranks of the unbeaten in a record-breaking five seconds in a featured welterweight contest. Masvidal climbs to No. 4 at 170 pounds while Askren drops to sixth.

Other fighters to hold steady at UFC 239 included Jan Blachowicz, who remains ranked eighth at 205 pounds after starching former middleweight champion Luke Rockhold, and Claudia Gadelha, who outpointed Randa Markos to stay put at No. 6 at strawweight.