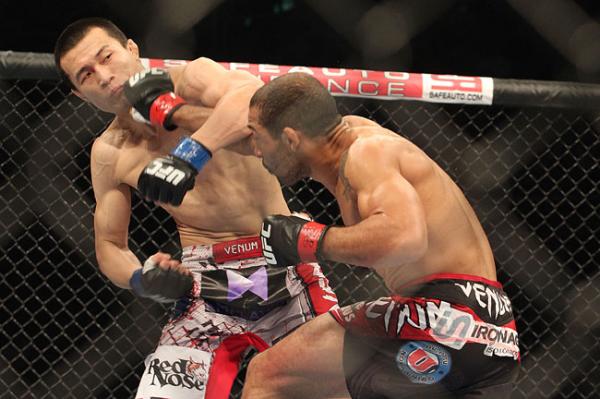 Jose Aldo is a champion capable of making adjustments on the fly.

After suffering a foot injury early in his UFC 163 encounter with Chan Sung Jung, the featherweight champion abandoned his trademark leg kicks and adopted a different approach. For three rounds, the Nova Uniao stalwart relied on a crisp jab and takedowns to bolt out to an early advantage against “The Korean Zombie.” And when Jung injured his shoulder throwing a punch in the fourth round, the Brazilian responded appropriately, kicking at the joint repeatedly before finishing the fight with punches on the ground. Aldo has now won 16 fights in a row, and he awaits a new challenge from a bevy of hungry featherweight contenders.

Meanwhile, the fates were not as kind to Lyoto Machida, who dropped a controversial decision to Phil Davis in the UFC 163 co-headliner. While many viewers and pundits thought “The Dragon” was clearly the superior fighter, the judges in Rio de Janeiro saw it differently, putting a damper on the former champion’s hopes of receiving a return date with Jon Jones.

Elsewhere, flyweight king Demetrious Johnson solidified his spot atop the division with a masterful performance at UFC on Fox 8, submitting John Moraga with an armbar in the fifth round. Rory MacDonald was not nearly as emphatic in taking a three-round verdict over Jake Ellenberger, but the young Canadian’s jab proved more than enough to continue his ascent in the welterweight ranks.