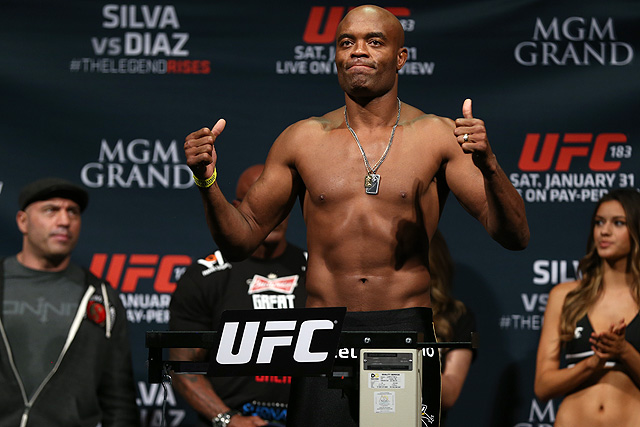 Thirteen months after suffering a gruesome leg injury which would have ended many careers, “The Spider” crawled back into the cage at UFC 183.

Anderson Silva notched a five-round unanimous decision against Nick Diaz on Jan. 31 in Las Vegas, and while the former undisputed middleweight ruler and pound-for-pound king picking apart an upsized welterweight might not sound like a major accomplishment on paper, it was a significant victory nonetheless. Silva showed no ill effects from his once-snapped left leg and did not appear to have slowed as he unleashed all aspects of his striking arsenal on the famously durable Diaz.

While a muddled situation atop the 185-pound division will prevent Silva from cashing in on the title shot promised him by UFC President Dana White, it may not matter: the 39-year-old Brazilian was noncommittal after the bout regarding his future inside the Octagon. For now, Silva remains ranked as the No. 2 middleweight, behind the only man to defeat him in the UFC, Chris Weidman.

Weidman, meanwhile, continues to be plagued by injuries. The New Yorker was once again forced to bow out of a title fight with Vitor Belfort, this time due to a rib injury. Long sidelined while waiting for his chance at the belt, Belfort has not competed since November 2013. One year of inactivity with no upcoming fight would typically lead to his removal from the top 10, but due to the unusual nature of his now thrice-rescheduled duel with Weidman, “The Phenom” remains ranked.

In another rankings conundrum, No. 9 flyweight John Lineker took a unanimous decision over No. 4 Ian McCall at UFC 183. Both fighters will remain in their respective spots, however, since the bout was contested at 130 pounds due to Lineker missing weight for the fourth time in his UFC tenure.

Other action saw Miesha Tate claim the No. 2 spot in the women’s bantamweight rankings by outpointing Sara McMann, while welterweight Tyron Woodley held strong at No. 4 by becoming the first man to beat Kelvin Gastelum. Middleweight Thales Leites entered the rankings at No. 10 thanks to a technical submission win over Tim Boetsch, and Al Iaquinta took a spot on the list of lightweight contenders by defeating Joe Lauzon.