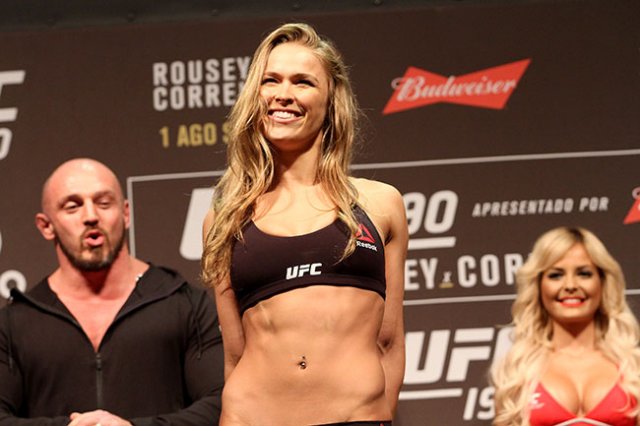 By now, it is painfully clear: There’s Ronda Rousey, and then there’s every other woman at 135 pounds.

Rousey’s lastest blowout came at UFC 190 in Rio de Janeiro, where she traveled to face unbeaten -- but unranked -- Bethe Correia on the challenger’s home turf. Rather than using her judo chops to whip Correia on the ground, “Rowdy” marched straight at the supposed best striker in the division and connected with a sweet right hand to the temple that wiped out Correia in just 34 seconds.

It is looking less and less likely that any female bantamweight will dethrone Rousey, who has finished her last three opponents in a combined 64 seconds. Having already cleaned out her division, Rousey must again face the question of a potential fight with Cristiane “Cyborg” Santos, whom the champion insists must come down to 135 for the bout. Whether that is even a possibility remains to be seen; for now, Rousey will have a third dance with old rival Miesha Tate before heading off to film a movie.

Twenty pounds down the scale, Claudia Gadelha gave the strawweight division a shot in the arm by spoiling the Octagon debut of Jessica Aguilar. “Claudinha” was dominant from the opening bell, beating Aguilar to the punch and using relentless pressure to earn a lopsided decision over the former World Series of Fighting ace. Gadelha moves into the No. 2 spot at 115 pounds -- behind only champion Joanna Jedrzejczyk, whom she will rematch later this year. Onetime top dog Aguilar falls to No. 3.

Elsewhere on the UFC 190 bill, Demian Maia moved up one spot to No. 8 in the welterweight top 10 by ending the seven-fight winning streak of Neil Magny with a dominant ground performance; Antonio Silva kept his spot on the list of heavyweight contenders by punching out Soa Palelei; and Iuri Alcantara stayed on the bantamweight bubble with a decision win against Leandro Issa.

On the same night, a fight for the World Series of Fighting welterweight title turned ugly when champion Rousimar Palhares repeatedly raked the eyes of challenger Jake Shields before failing to immediately release a kimura after Shields tapped out. For his part, a frustrated Shields punched the Brazilian in the face after the end of the bout. Disciplinary action has yet to be announced for either fighter -- WSOF Vice President Ali Abdelaziz said Palhares could be stripped of the belt -- but for now, Palhares takes the No. 9 spot, while Shields falls two places to No. 10.

WSOF bantamweight champ Marlon Moraes defended his belt in less controversial fashion, taking out challenger Sheymon Moraes with a big left hand and a rear-naked choke. The victory moves Moraes up one notch to No. 7 in the 135-pound rankings, ahead of Zuffa mainstay Takeya Mizugaki.