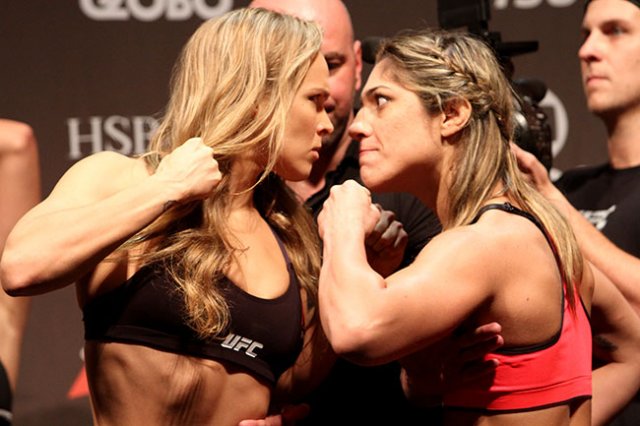 
Ronda Rousey stepped into Bethe Correia’s wheelhouse and did not blink.

Rousey knocked out Correia in dramatic fashion to retain the Ultimate Fighting Championship women’s bantamweight crown in the UFC 190 “Rousey vs. Correia” headliner on Aug. 1 at the HSBC Arena in Rio de Janeiro. She needed just 34 seconds to complete her night’s work.

Correia never stood a chance. Rousey walked through her punches, pinned the Brazilian brawler along the fence and fired away with rights and lefts until she was no longer standing. A right hand connected on the Pitbull Brothers rep’s temple and sent Correia crashing face-first to the canvas, electrifying onlookers. Referee John McCarthy then moved in to pry Rousey off the defenseless challenger.

“I felt like it’s a challenge to actually be able to get a knockout like that,” Rousey told Fox Sports 1. “I want to silence every kind of criticism one at a time, and I think I silenced one tonight.”

The 28-year-old Rousey has finished her last four opponents in 130 seconds combined.

“You don’t see women knock women out like that, the way that she knocked her out,” UFC President Dana White said. “She can do it all. Ronda just gets better every time she fights.”

The other stories of interest on Sherdog.com during the month of August:

* GETTING ‘ROWDY’ DOWN UNDER

* AND WASHED ‘THE SPIDER’ OUT

* CHARLES NOT IN CHARGE

* COURT BACK IN SESSION