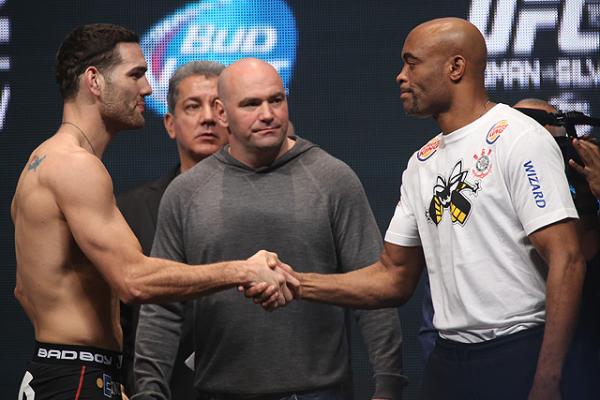 After six-plus years of making everyone who stepped into the Octagon with him look like mere mortals, Anderson Silva finally found his kryptonite.

For the second time in as many outings, “The Spider” was stopped by Chris Weidman in the second round of a middleweight title bout. The most recent defeat, which resulted in a badly broken left leg for Silva at UFC 168, raised questions as to whether the Brazilian will ever fight in the UFC again. If it does turn out to be Silva’s swan song, his legacy as one of the sport’s all-time greats remains secure.

By defeating Silva twice, Weidman has emerged as a top 5 pound-for-pound talent and one of the MMA’s brightest young stars. Despite the shocking nature of his two wins over Silva, Weidman’s rise to prominence is no fluke. The Serra-Longo Fight Team product is a tantalizing blend of striking, grappling and athleticism, and it will take a remarkable effort to dislodge him from his lofty perch. Vitor Belfort, who knows a little something about jaw-dropping knockout victories, will be next to try and unseat the “All-American.” Weidman and Belfort are expected to square off in either May or July in Las Vegas.

Heading into the UFC 165 main event, Jones viewed his showdown with Alexander Gustafsson as a chance to cement his place as the greatest light heavyweight champion in promotion history. While “Bones” surpassed Tito Ortiz’s record for 205-pound title defenses with a unanimous decision triumph, he learned that the 6-foot-5 Swede measured up to the challenge in more ways than just height. While 25 hard-fought minutes against “The Mauler” exposed more chinks in the New York native’s armor than his previous five title defenses combined, Jones also displayed admirable heart in the face of adversity. An eventual rematch with Gustafsson appears inevitable, but surging Brazilian Glover Teixeira will challenge the pound-for-pound king at UFC 172.

The featherweight division’s Brazilian ace was not at his leg-kicking best at UFC 163, thanks to a foot injury sustained early in the bout; but, as champions do, Aldo found a way to win. When challenger Chan Sung Jung separated his shoulder in the fourth round, Aldo pounced on his wounded foe and pounded out his fifth consecutive title defense. While the Nova Uniao fighter continues to discuss a potential move to lightweight, his next challenge will come at 145 pounds when he defends his belt against Ricardo Lamas at UFC 169.

Velasquez removed any doubt as to who is the best heavyweight in the world by administering a brutal beating to Junior dos Santos at UFC 166. The final bout of the trilogy was never really in doubt, as the American Kickboxing Academy ace dominated in the clinch and rarely allowed his opponent any space to unleash his formidable boxing. Velasquez dropped his opponent in the third round and earned the stoppage late in the fifth, where dos Santos finally wilted after hitting his head on the canvas following a failed guillotine attempt. Brazilian submission specialist Fabricio Werdum was expected to receive the next shot at Velasquez, but after undergoing shoulder surgery, the champion could be out until late 2014.

Weidman cemented his spot atop the middleweight division with a second consecutive triumph over Anderson Silva in the UFC 168 main event. After nearly finishing “The Spider” in the opening frame, the Serra-Longo Fight Team standout checked a kick which resulted in a gruesomely fractured leg for Silva, ending the bout 1:16 into the second round. Unbeaten in seven Octagon appearances, Weidman is expected to make his second title defense against the red-hot Vitor Belfort in Las Vegas in May or July.

There is “Mighty Mouse,” and then there is the rest of the flyweight division -- that much remains clear. When Johnson bested Joseph Benavidez at UFC 152 for the promotion’s inaugural flyweight strap, it was a closely contested split decision in favor of “Mighty Mouse.” In their rematch at UFC on Fox 9, Johnson removed all doubt as to the identity of the division’s undisputed king with a first-round knockout victory. Since he first captured 125-pound gold in September 2012, Johnson has defended his title three times in increasingly impressive fashion. As it stands, the AMC Pankration representative has bested the three men directly below him in the flyweight division: Benavidez, John Dodson and Ian McCall. While a rematch with Dodson could eventually come to fruition, Johnson could also look to pursue super fights against opponents from other weight classes.

Pettis needed five rounds and the remarkable “Showtime” kick to wrest the WEC belt from Benson Henderson in 2010, but he required far less time to earn his second victory over “Smooth” and become the new UFC lightweight king. In the UFC 164 headliner, Pettis softened his opponent with a series of brutal body kicks and then locked in a fight-ending armbar with 29 seconds left in round one. About the only thing that went wrong for Pettis was a knee injury he suffered while checking a kick. While the ailment was diagnosed as a sprain, lingering issues with the knee forced the Roufusport standout to withdraw from a UFC on Fox 9 showdown with Josh Thomson. After undergoing surgery, Pettis is likely out until mid-2014.

With one spectacular spinning back kick to the face of challenger Eddie Wineland, Barao continued to put more distance between himself and the “temporary” label. With a resume that includes triumphs over Brad Pickett, Scott Jorgensen, Urijah Faber, Michael McDonald and the aforementioned Wineland, nobody can deny that Barao has earned his current spot atop the 135-pound division. The Brazilian will attempt to make his standing official when he welcomes reigning titlist Dominick Cruz back to the Octagon at UFC 169.

Nobody wanted to see Anderson Silva’s night end the way it did at UFC 168, as the longtime pound-for-pound king suffered a broken left leg when Chris Weidman checked a kick during the second round of their headlining matchup. The Brazilian underwent emergency surgery following the bout and is expected to make a full recovery. Prior to undergoing the procedure, “The Spider” reportedly asked when he could begin training again, but it is unclear if an eventual return to the Octagon is in the cards. Silva, who turns 39 in April, was victorious in his first 17 UFC appearances before falling to Weidman in consecutive bouts.

After seven consecutive triumphs to begin his UFC career, “Smooth” relinquished his lightweight crown to the same man who snatched WEC gold from his clutches in December 2010: Anthony Pettis. The MMA Lab product had no answer for Pettis’ dynamic attack at UFC 164, as “Showtime” had Henderson reeling with a series of hard body kicks before finishing the fight with an armbar from guard in the opening frame. Henderson will return to the cage in January, when he squares off with former Strikeforce champion Josh Thomson in the UFC on Fox 10 headliner.

After a narrow -- and controversial -- loss to Benson Henderson in a lightweight title bout in April, Melendez returned to his winning ways at UFC 166. For two rounds, “El Nino” showcased his technical superiority over Diego Sanchez before electing to go all-in during a wildly entertaining third-round brawl against “The Dream.” Despite some harrowing moments, Melendez emerged with a three-round verdict and likely increased his fan base in the process. The Skrap Pack representative’s only defeat in the past four-plus years came against Henderson, meaning he should not be far removed from the 155-pound title picture.