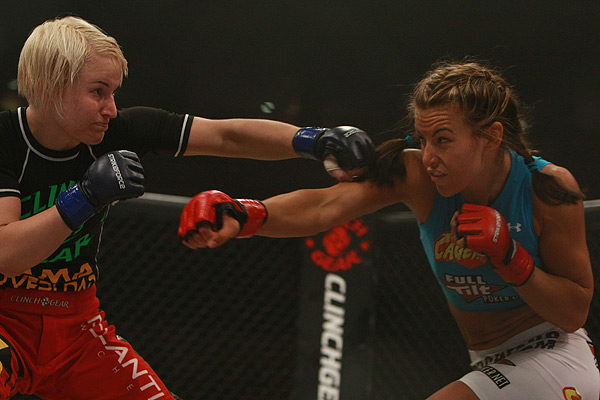 Strikeforce women’s bantamweight champion Miesha Tate on Saturday will defend her title against Olympic bronze medalist Ronda Rousey at the Nationwide Arena in Columbus, Ohio, in what appears to be the last significant female MMA fight on the horizon.

Although the highly anticipated clash at Strikeforce “Tate vs. Rousey” has been publicized to the hilt, Tate does not see it as her biggest fight to date.

“It’s weird. Publicity-wise, it is my biggest fight, and it’s also my first title defense, so if I can seal the deal on this, I think it really says a lot about me being here to stay as a champion and definitely being a force to be reckoned with,” Tate told Sherdog.com. “I don’t believe I’m here by fluke, although I think some people kind of question whether I’m truly champion material, and I want to prove that. But as far as match-up wise, I don’t think it’s my biggest fight to date.

“She just hasn’t accomplished what a lot of the other girls that I’ve already fought have accomplished, yet she’s kind of jumping ahead of a few of them,” she added. “I don’t necessarily feel that that’s right, but the thing about Ronda is what she does do she’s really good at; but I just have a lot of questions about what she can’t do, and I think there’s a lot of holes in her game, as well.”

Rousey’s limited cage experience has become a point of contention with many detractors.

“There’s just a certain element that you can’t ever re-create: experience,” Tate said. “Cage time is invaluable; you can’t put a price tag on it and you can’t re-create it no matter how many times you spar or practice or train with your training partners. It’s just something you learn by being in there and doing it, and she just doesn’t have much of that.” Ronda Rousey
Rousey is 4-0.
Strikeforce CEO Scott Coker has responded to critics by pointing out that Rousey has many years of experience in judo, with plenty of national and international competition and success under her belt. When Rousey compares training for the Olympics with training for this title fight, it becomes clear which experience she finds more valuable.

“Going to the Olympics is something that I’d been thinking about and obsessing about and training for my entire life,” she told the Sherdog Radio Network’s “Rewind” program. “That exact Olympics was in every single thought of every day in the four years since the one before. This title fight with Miesha Tate only entered my mind a few months ago. It’s not like it’s one day that’s the pinnacle of everything I’ve been working for my entire life. It’s something that I thought would be a cool idea a few months ago.”

Rousey has drawn criticism from some for rushing into a title fight inside a division in which she has never competed, leaving many to speculate that she wants to avoid strikers in the featherweight division.

“Even [UFC television analyst] Joe Rogan said that you’re a tougher matchup as a strong wrestler because wrestling can shut down judo, so once her judo’s shut down, then what?” she added. “What does she have in her toolbox inside this whopping year of her MMA career? I’m sure she has more than just an armbar, but I’m not confident that she has anywhere near the skill set that I have.”

Rousey makes no apology for talking her way into a title shot.

Tate has been quite verbal about her disagreement with Rousey’s approach. Although she acknowledges Rousey might deserve of a title shot, she does not believe the judoka is as deserving as Kaufman or Alexis Davis. Those two women will meet on the undercard in a de facto title eliminator.

“In my opinion, those girls are still ahead of her,” Tate said. “She leapfrogged a lot of people, and I don’t have a whole lot of respect for her because of that. And it was premeditated. How about you let your skills speak for you rather than your loud mouth? I definitely think that there’s other fighters that are more worthy than Ronda, and it is frustrating that Ronda is the one getting the limelight when there’s so many other girls that have worked way harder than her and have put in their time and are more deserving than she is, yet she’s a cute girl and she runs her mouth a lot.

“That’s kind of frustrating, that people feed into that to such an extreme degree, and that’s why she’s getting this possibility -- more her mouth than her skill set by far,” she added. “She’s not the number one contender at 135 [pounds]. She’s not.”

“
She leapfrogged a lot
of people, and I don’t
have a whole lot of
respect for her because
of that.

Rousey has stated publicly that Kaufman should be grateful to her for bringing women’s MMA more exposure and has gone so far as to claim that Tate is upset because it took her six months to do what it took the champion six years to accomplish.

“Six years ago, women’s MMA was unheard of -- and it’s because me and Sarah Kaufman and Tara [LaRosa] and Marloes Coenen -- we’ve been laying the groundwork so we can even get the opportunity, and she comes in on this high horse,” Tate said. “I have no idea what she’s even talking about: ‘Oh yeah, you guys should be thanking me because I’ve been doing this all for women’s MMA, and I’m so great and I’m so awesome and without me women’s MMA would be nowhere,’ and we should all be kissing her ass. That really bothers me.”

Finish Reading » “I just think that Ronda has a ton of hype going in, and I think she has a really big head. I think she’s buying into it, too. Everyone’s jumping on her bandwagon, and my job is basically to go in there and give her a dose of reality.”