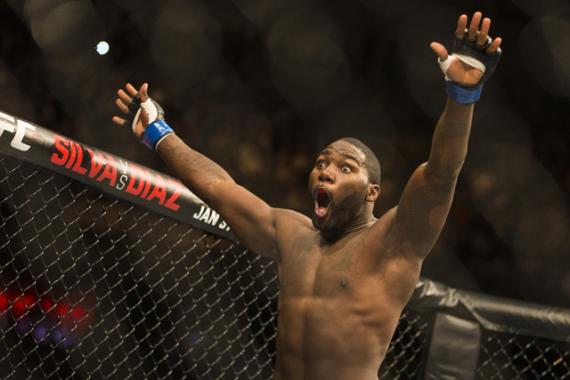 
Not even the rabid support of some 30,000 of his fellow Swedes could save Alexander Gustafsson.

Anthony Johnson crashed the party in the UFC on Fox 14 main event on Saturday, as he wrecked Gustafsson with punches for a stunning first-round technical knockout at the Tele2 Arena in Stockholm. According to preliminary FightMetric data, “The Mauler” absorbed 30 significant strikes before referee Marc Goddard stepped in to prevent him from taking further punishment 2:15 into the first round.

Gustafsson failed to maintain a safe distance between himself and the Blackzilians destroyer. Johnson cracked the Swede with an overhand right, blitzed him with follow-up punches and eventually drove him to all fours. Once there, the dazed Gustafsson could no longer intelligently defend himself, and the finish became a formality. With that, Johnson picked up the baton as the new No. 1 contender in the Ultimate Fighting Championship light heavyweight division.

In wake of UFC on Fox 14, here are six matchups that ought to be considered.


Anthony Johnson vs. Jon Jones: Johnson has flourished under trainer Henri Hooft and the rest of the support system associated with the Blackzilians camp. The 30-year-old Dublin, Ga., native has pieced together a nine-fight winning streak and become a bona fide star at 205 pounds. Johnson showed no regard for Gustafsson’s considerable skills, as he walked through “The Mauler” with surprising ease en route to becoming the first man to stop him on strikes. Jones last appeared at UFC 182 on Jan. 3, when he retained his light heavyweight title with a unanimous decision over Daniel Cormier. His immediate future remains up in the air, however, after it was revealed he tested positive for cocaine during a pre-fight drug test.

Alexander Gustafsson vs. Daniel Cormier: Gustafsson had designs on locking up a rematch against Jones -- he had pushed the champion to the limit in losing a decision at UFC 165 -- but Johnson swooped in and stole his thunder. The 28-year-old will undoubtedly have a difficult time processing his latest setback, which took place before a record-setting crowd in his homeland. Still, Gustafsson remains a key cog in a top-heavy division and could climb back into contention in a relatively short period of time with a high-profile win or two. Cormier last fought at UFC 182, where the American Kickboxing Academy ace’s bid to dethrone the aforementioned Jones fell short at the MGM Grand Garden Arena in Las Vegas.

Gegard Mousasi vs. Michael Bisping-C.B. Dollaway winner: Labeled by some as an enigma, Mousasi’s talents are undeniable. The former Dream and Strikeforce champion needed a cool 70 seconds to waylay Dan Henderson in the co-headliner, and though the stoppage was not without controversy, Mousasi seemed to have the situation well in hand, with or without the assistance of referee Leon Roberts. Still only 29, Mousasi has alternated wins and losses in each of his first five UFC appearances and will need to establish more consistency if he wants to make real headway at 185 pounds. Bisping and Dollaway will lock horns at UFC 186 on April 25 in Montreal.

Ryan Bader vs. Rashad Evans: Bader picked up his fourth straight decision win, as he outdueled four-time NCAA All-American wrestler Phil Davis over three rounds. “The Ultimate Fighter” Season 8 winner utilized a stinging jab, the occasional left hook and near-flawless takedown defense in getting past Davis and improving his standing in the light heavyweight division. Bader, 31, has won seven of his last nine bouts, losing only to Lyoto Machida and Glover Teixeira. Sidelined by injuries, Evans has not competed since he took out Chael Sonnen with first-round punches at UFC 167 in November 2013.

Phil Davis vs. Ovince St. Preux: Davis looks more and more like a man stuck in the middle, good enough to get past most light heavyweights but not quite complete enough to creep into division’s upper tier. While Davis was effective with his kicks and in some close-quarters exchanges, his lack of punching prowess, particularly at a distance, proved costly against the more polished Bader. “Mr. Wonderful” has lost twice in three outings since claiming a controversial and widely panned decision from Lyoto Machida at UFC 163. St. Preux, meanwhile, delivered the most significant victory of his career at a UFC Fight Night event in November, when he dispatched 2005 Pride Fighting Championships grand prix winner Mauricio Rua in just 34 seconds.

Albert Tumenov vs. Rick Story: A winner in 10 of his past 11 bouts, Tumenov has begun to surface as a serious threat in the welterweight division. The 23-year-old Russian overcame a slow start to pick apart Nicholas Musoke for a three-round unanimous decision in Stockholm, the victory following back-to-back first-round knockouts against Anthony Lapsley and Matt Dwyer. Afterward, Tumenov called for a matchup with Story, a consummate grinder who took a split decision from the highly regarded Gunnar Nelson under the UFC Fight Night marquee in October.
SHARE ON FACEBOOK SHARE ON TWITTER
Related Articles
Latest News
+ VIEW MORE