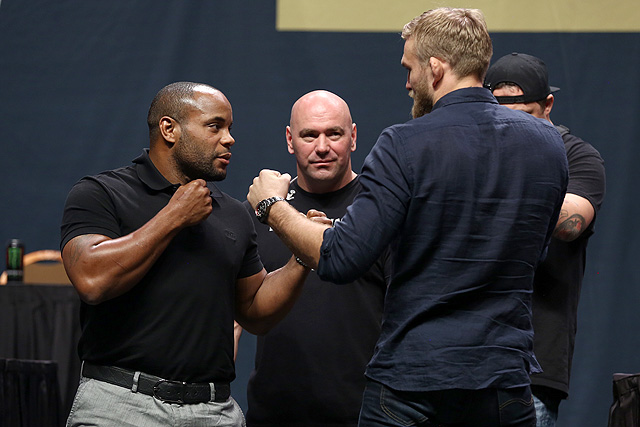 Light heavyweight stars have an awful lot to lose at UFC 192 in Houston. | Photo: Dave Mandel/Sherdog.com


By avoiding any jail time or a criminal fine for his hit-and-run idiocy, Jon Jones saw a bit of sunshine this week. A few scant rays of light were all Jones needed to cast his cold, dark shadow over the division.

UFC 192 on Saturday in Houston will feature four of the world’s top light heavyweights doing battle, with no hope of any of them being considered the absolute best in their class. One will leave with a gold belt but not as a champion. One of the fighters with the chance to leave with that trinket doesn’t even deserve the opportunity. All four men have been previously victimized by Jones.

Don’t think that means the stakes aren’t high, as UFC 192 is a crucible of cruelty as far as 205-pound context is concerned. Welcome to the Bastard Olympics, where it’s not so much about the spoils of victory but the rather the dread of what might be ripped from your hands in defeat.

Unlike the real Olympics, Daniel Cormier, Alexander Gustafsson, Ryan Bader and Rashad Evans are all going to get paid -- they’re prizefighters, after all -- but that’s the only real positive part of their respective predicaments. Top to bottom, UFC 192 is a righteous card, but the assembly of its 205-pound fights is highly dubious, a thesis I’ve already lustily expounded. I’ve yet to hear any individually compelling case for Gustafsson’s title shot beyond the inane “He’s better than Bader,” as if that has ever been the Ultimate Fighting Championship’s standard in any contendership situation. Neither man is a draw, and it isn’t as though Gustafsson was chosen for a markedly more important, international flavor.

Irrational matchmaking can have consequences, and in this case, it helps set the modest-gain-massive-loss stakes involved at UFC 192. Gustafsson’s title shot hasn’t been met with a mixture of confusion and venom without reason, and it’s not just because Bader is a more sensible, sporting option. “The Mauler” is 1-2 in his last three fights and was wasted by Anthony Johnson in front of 30,000 of his Swedish countryfolk in January -- a loss he found so personally devastating that he considered quitting MMA entirely. Now, he’s expected to overcome that hurdle against Cormier, one of the 10-15 best fighters on Earth regardless of weight?

Should Gustafsson lose, as most expect him to, he’ll be 1-3 over the last four years, having been defeated by the three most dangerous fighters in the weight class. Sure, he’s only 28 years old, but that’s a damn cold world to be living in. In a two-year span, Gustafsson will have gone from one half of the 2013 “Fight of the Year” against Jones to an elite also-ran. We’re not talking about Joseph Benavidez clobbering everyone but Demetrious Johnson; we’re talking about a more uncomfortable no man’s land. Should Gustafsson win, the biggest win of his MMA career will ring hollow. Bruce Buffer will say “and new UFC light heavyweight champion of the world,” but no one will believe it because they saw an undertrained, unfocused Jones land the spinning back elbow in round four at UFC 165 and change the tide of history.

A Gustafsson win, at best, puts him in the same uncomfortable role Cormier already occupies. Fortunately for the U.S. Olympian, he is fully cognizant that he is simply an outstanding fighter wearing a big, shiny belt buckle. Since taking Jones’ vacated title against Johnson in May, literally since the moment he spoke after winning it, Cormier has been talking about Jones: “I’m always thinking about Jon Jones” and “I need Jon Jones.” Cormier knows “Jonny Bones” is his nemesis, his ultimate competitive foil and the outrageously difficult prism through which people will forever analyze his own career.

Cormier’s initial thought on his opponent? “All logic said it was going to be Bader.” That was before he took to calling Gustafsson “overrated,” bristling that onlookers consider the Swede a potent threat because of how close he fought Jones two years ago. Cormier is undoubtedly a savvy trash talker in the game, but his true feelings are hardly veiled here. He couldn’t be too much more explicit, short of grousing, “This is all a joke until I see Jon Jones again, but at least I’m getting paid.”

If Cormier falls, we not only lose a stupendous potential rematch between arguably MMA’s best current rivals, but it accentuates the intense parity that exists when Jones isn’t around. It took Jones to put 205 pounds on lockdown to cease the likes of Evans, Forrest Griffin, Lyoto Machida and Mauricio Rua playing musical chairs with the title. Cormier dropping his trinket is unlikely, but it would still be a bitter return to dismaying historical form.

What does Bader have to show for his stolen title shot? He gets a stylistic nightmare in Evans, a fight in which his best chance to win is to grind and smother a naturally elusive counterpuncher with great wrestling. It’s a fight against a potentially dangerous opponent, one that Bader will get next to no credit for winning, as a myriad of injuries will have sidelined Evans for 686 days when he finally gets back to the cage. If Bader hustles his way in Bader-esque fashion to some 29-28 scorecards in a close decision, it will come in an inactive fight that does little to inspire any excitement about the former Arizona State Sun Devil as a title contender. If he loses, it further crystalizes the narrative of Bader as a big-fight choke artist who can’t get over the hump.

Evans is 36, hasn’t fought for nearly two years and just started training again at full speed in June. Even if he lands a beautiful right-hand counter on a charging Bader and exploits that weakness, is anyone enthused about Evans as a contender? His history of knee injuries, which are naturally intensifying with the passing of time, will remain a terrifying caveat when discussing any major fight for the former champion going forward. If Evans comes out rusty and lays a stinker, distinctly possible given his low volume and passive nature even when healthy, it’ll be obvious that he would’ve been better served by a more appropriate tune-up. Worse, it’ll push him further into the dark, dusty recesses of the collective MMA unconsciousness, which already seems to view Evans more as an on-air analyst than a fighter at this point.

Jones’ selfish, moronic behavior put the UFC in this position, but the company still didn’t play its best hand. Unwittingly or not, UFC 192’s composition serves to highlight and reinforce how truly crucial Jones’ presence is and the extent to which his absence downgrades the 205-pound weight class to being the “lite heavyweight” division. He’s still a ways away from bear crawling and handspringing around the Octagon, but Jones’ shadow is preceding his return. It’s cold, it’s dark, and not even the most golden belt will have a championship glimmer.

Cormier, Gustafsson, Bader and Evans all dream of winning on Saturday, but their greatest motivation ought not be the ecstasy of a potential win, but rather the tenfold agony of the potential defeats they face, as they all teeter on a shadowy championship precipice. None of these men can leave Houston as the real champion -- none of them can morph into Jon Jones -- but if any of them want their respective chances at revenge on “Jonny Bones,” they will need to fight like champions, to triumph when there is little to be won and everything to be lost, when the only outcomes are relief and catastrophe.