Before Randy Couture returned to the UFC and before Frank Mir was guaranteed a title shot against Antonio Rodrigo Nogueira following their coaching stints on “The Ultimate Fighter 8,” there was talk that Fabricio Werdum could be the next man to challenge for the UFC heavyweight title.

Now the plan features a four-man title tournament: Mir vs. Nogueira and Couture vs. Brock Lesnar.

Obviously Werdum did not make the tournament, though he hopes he’s still in the title picture.

“That’s why I want to have a good fight now against ‘Cigano,’ to show I am ready for the belt,” Werdum told Sherdog.com. “They will analyze this fight and judge if I deserve this opportunity or not. So I want to fight well now to deserve the belt.”

That doesn’t mean Werdum, whose 11-3-1 record includes a win over Aleksander Emelianenko and a competitive loss to Nogueira, is especially motivated to meet the 6-1 Santos. 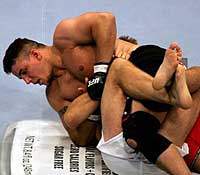 Photo by Sherdog.com
Werdum is not happy with the
UFC’s decision to give Frank
Mir (pictured) a title shot.
“This is my last fight under my old contract, which had four fights,” he said. “I have already closed a new contract with the UFC, which has four fights too. This fight for me will be an obligation, nothing else, but I have to do my role.”

Werdum has focused on muay Thai during training. He has worked with Chute Boxe and Rudimar Fedrigo as well as with Anderson Silva’s coach, Madison. The 31-year-old Brazilian said he is also stronger now, having gone from 249 pounds to 260.

“I will not serve as a ladder for ‘Cigano’ to climb up on his career,” Werdum said. “Not to anyone else either, though I wish him luck in his career. I’ve trained a lot to get where I am. I see this fight as any other important fight in my career -- I’m not able to afford to lose. I never underestimate any fighter. I know that any fight is a different one, but I feel confident for this fight. I’ve prepared myself as if it were a dispute of the belt.”

“He is a young guy with a future, prepared to grow in the world of the fights. I saw a few things from him, but I’ve noticed that he is willing to come up. The guy is good. He trains with Antonio Rodrigo Nogueira, Antonio Rogerio Nogueira, Anderson Silva, Rafael FeijÃ£o and with everybody else from the Minotauro Team. And because he is in the UFC -- they believe in him -- I know that he has something else.”

Should Werdum score a win over his fellow Brazilian, he’ll be watching to see who emerges from the heavyweight tournament. He doesn’t exactly agree with how the field was set up.

“I didn’t like that they put Brock Lesnar against Randy Couture,” Werdum said. “I think that it would be fair to put ‘Minotauro’ Nogueira against Couture -- it had to be a fight between these two. Despite having been champion once, I’ve not found it fair that Frank Mir is fighting for the belt. I had two great victories where I was very superior to my opponents, Gabriel Gonzaga and Brandon Vera. I’ve won by myself -- not the judges.

“So I think I would be the one to fight against ‘Minotauro’ or Couture, the winner between the two of them, for the belt. I’ve imagined that I would fight for the title in March. Let’s see what will happen. I hope to do my part fighting against ‘Cigano.’ I won’t underestimate him. I will win. It will be by knockout or a finish. I won’t give any opportunity for bad luck.”

Werdum expects to face the winner of Couture and Nogueira because he expects those two men to advance in the tournament.

“I guess ‘Minotauro’ defeats Mir, who is out of shape, as I saw in his last fights. [Mir’s] time has passed,” Werdum said. “On the other hand, Lesnar has no experience while Couture is very experienced. I guess Couture and Minotauro will be the ones who win.”

From there, Werdum anticipates that Nogueira will knock off Couture, which could set up a rematch between the Brazilian jiu-jitsu black belts.

“I will cheer for ‘Minotauro,’ for sure,” Werdum said. “It will be a good fight. I guess ‘Minotauro’ is better on the feet, and if Couture wants to go to the ground, he won’t succeed there either. I have faith in ‘Minotauro.’”
SHARE ON FACEBOOK SHARE ON TWITTER
Related Articles
Latest News
+ VIEW MORE