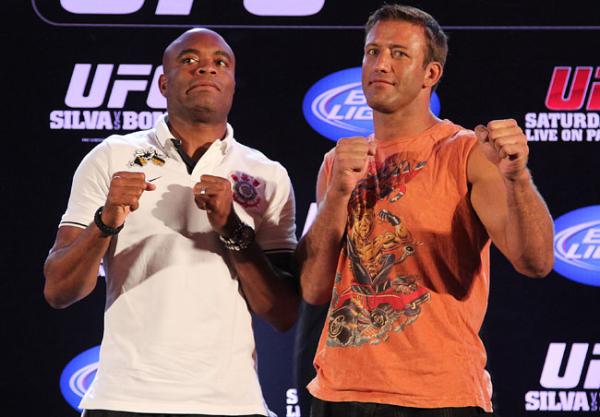 Does Stephan Bonnar have what it takes to spring a monumental upset? | Photo: Sherdog.com


Not many man can compete with Ultimate Fighting Championship middleweight king Anderson Silva, much less beat him.

The incomparable Silva moves to the 205-pound division for the first time in three years to meet “The Ultimate Fighter” Season 1 finalist Stephan Bonnar in the UFC 153 main event on Saturday at the HSBC Arena in Rio de Janeiro, Brazil. On paper, pundits view it as one of the most lopsided headliners in the promotion’s history.

Undefeated inside the Octagon, Silva will carry a 16-fight winning streak into the bout. The reigning middleweight champion last appeared at UFC 148 in July, when he scored a second-round technical knockout and put an end to his bitter rivalry with Chael Sonnen at the MGM Grand Garden Arena in Las Vegas. Silva has finished 25 of his 32 professional victories, 19 by knockout or TKO and six others by submission. He has not been legitimately defeated in nearly eight years.

Bonnar has crafted a modest three-fight winning streak of his own. A protégé of the late Carlson Gracie, the 35-year-old Hammond, Ind., native has not fought since he coasted to a unanimous decision over Kyle Kingsbury at UFC 139 in November. Known for his durability and willingness to engage in firefights, Bonnar has been finished only twice in 22 career appearances, both times on cuts.

Sherdog.com touched base with a number of professional fighters and trainers to gauge their opinions on the UFC 153 “Silva vs. Bonnar” main event:

Rich Franklin: Nothing really needs to be said about Anderson. Anderson is Anderson and he does what he does. I think most people will make a prediction and say Silva will win. If Bonnar is going to win this fight, he cannot come in with that slugging attitude that he had in those classic fights with Forrest Griffin. Stephan is a highly skilled jiu-jitsu player, and I’d say that he’s highly underrated in the MMA community because none of his fights are ever on the ground. He cannot have the game plan like Forrest had when he fought Anderson or he’ll end up with a similar outcome. He needs to figure out a way to get this fight to ground. Stephan is a very big guy, and he has a good reach. He needs to utilize that to close the distance and use his size and weight; that’s his key for possibly winning this fight.

Ricardo Liborio: Anderson will win, but this fight won’t be that easy. Bonnar is tough as nails.

Anderson Silva File photo
Silva is a perfect 15-0 in the UFC.
Joe Duarte: I applaud Bonnar for stepping up to the plate, but Anderson is on a whole other level. I’m going with Anderson by another Steven Seagal move.

Kyle Kingsbury: Bonnar wins because I want him to.

Eric Prindle: I hope Bonnar wins. I think he can use his reach, keep it long and control Silva and get a takedown and go for a north-south submission.

Joseph Sandoval: If no one decides to get injured for the show or fight injured, I’m gonna have to go with Silva by TKO in the second round.

J.J. Ambrose: Silva has become the new Fedor Emelianenko. He carries that unbeatable mystique with him into the cage, beating opponents mentally before the fight even begins. I give props to Bonnar for stepping up to face the Greatest of All-Time. I’m looking forward to an exciting but short finish by Silva via TKO in the second.

Jeff Hougland: I admit it’s hard to see any way Silva could lose the fight. I’m a sucker for the underdog, though, so I’m going to pick “The American Psycho” by third-round rear-naked choke.

Mark Bocek: Silva wins by KO, round one.

John Hackleman: This is a very interesting fight, with Bonnar and his crazy heart -- which he’s shown many times, like in his fights with Forrest. He’s the highlight reel of the UFC, along with Forrest. He’s an icon and he’s fighting another icon. He’s going to have a huge challenge in trying to beat that crazy, awkward style of Silva and that awesome one-punch-even-when-running-backwards knockout power. I think with Bonnar’s incredible chin and heart, he’s going to make a great fight of it. It will be a great fight, period, and it will be a very, very interesting fight because they’re so unorthodox.

Erik Paulson: I believe that this fight will be the same as Forrest and Anderson. I think that Anderson will pick him apart exactly the same. I think that Stephan and Forrest are very similar game style fighters. This will be fun to watch.

Travis Wiuff: Bonnar brings the fight to Anderson and makes it exciting, but I see Silva being too skilled and talented and winning by TKO in the second round.

Zach Makovsky: A man with nothing to lose is always a dangerous one, and I think this will be a more difficult fight for Anderson than people think. I think Bonnar will get in close, make it a grimy fight and maybe get some takedowns. Anderson is a master of exposing people’s mistakes, and Bonnar will make plenty of them. After a surprisingly tough two rounds, Anderson gets a TKO in the third.

You can also contact Mike Sloan at www.facebook.com/mikesloan19, [email protected] or on his new blog: www.theprizewriter.com.