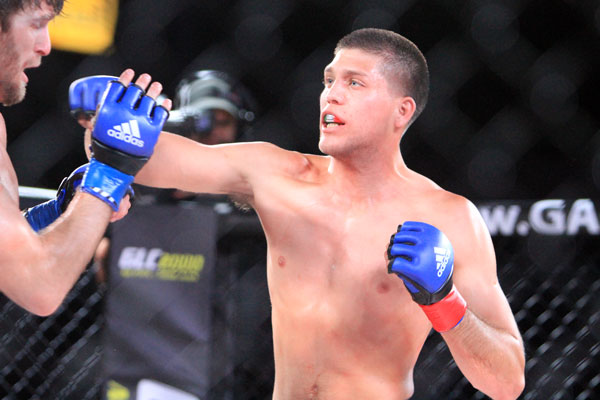 
Most professional mixed martial artists cannot wait for the call that gives them the opportunity to compete in the Ultimate Fighting Championship. However, a dead cellphone battery forced undefeated featherweight prospect Brian Ortega to have someone else take the call for him.

“I’d already been working out and just training to stay sharp,” said Ortega, who fights out of the Black House and Black Belt Surfing Team camps in California. “My phone had died. I was helping my dad work in the back yard and my phone was dead, so I wasn’t answering it at all. My boxing coach showed up to my house, and I thought it was an emergency. I was wondering what was going on. He said, ‘We got the call.’ He said, ‘The UFC called and they want us to fight.’ I was just shocked. My whole dream was to get to the UFC, and now it’s right before my eyes.”

Ortega was originally scheduled to make his promotional debut at “The Ultimate Fighter: Brazil 3” Finale against Diego Brandao in May. However, an injury forced the Brazilian to withdraw, leaving Ortega without an opponent and delaying his first appearance inside the Octagon. The 23-year-old will instead meet MMA Lab’s Mike de la Torre at UFC on Fox 12 on July 26 at the SAP Center in San Jose, Calif. For the fighter known as “T-City” due to his prowess in sinking triangle chokes, getting the opportunity to compete in the UFC will cap off a whirlwind start to 2014.

In January, Ortega won the Resurrection Fighting Alliance 145-pound title with a five-round split decision over Keoni Koch, the older brother of Roufusport standout and current UFC lightweight Erik Koch. Ortega then witnessed the birth of his second child and had to deal with the sometimes-tedious process of moving. He considers the time he spent within the RFA organization valuable.

“[Koch] was very good, and he’s been around the game,” said Ortega, who sports four submissions among his eight professional victories. “It was hard for me to finish him as opposed to some of the other guys I’ve fought. It really was a battle, and he was the toughest guy I’ve fought in my career so far. Sometimes, fighters have a good record, but they’ve fought tomato cans to build their record up. RFA isn’t like that. I’ve fought two really tough guys in my two fights there. RFA is a place where the higher you go on the ladder, the tougher the fights get.”

Like most fighters, Ortega’s path to MMA began in other combat sports. He started kickboxing when he was 5 and jiu-jitsu training at the age of 13. Mixed martial arts followed at 15, and he made his professional debut in April 2010 with a first-round submission of John Sassone on a Gladiator Challenge card. The Los Angeles native now carries a perfect 8-0 mark.

“I’ve always enjoyed contact sports,” said Ortega, a black belt in Gracie jiu-jitsu. “I did kickboxing, muay Thai when I was a kid and I trained jiu-jitsu for two or three years. Then I started having underground fights due to there not being [the California Amateur Mixed Martial Arts Organization] yet. My trainer asked me if I wanted to fight professionally, and I said, ‘Yes.’ When I turned 18 or 19 years old, I made the step to turn pro.”

De la Torre operates out of the same camp as former UFC lightweight champion Benson Henderson. The 27-year-old John Crouch understudy made his Octagon debut at “The Ultimate Fighter Nations Finale” in April, when he dropped a split decision to seasoned Brazilian jiu-jitsu black belt Mark Bocek. De la Torre has delivered 11 of his 12 career victories by knockout, technical knockout or submission, five of them in less than a minute. He has proven vulnerable to submissions thus far; three of his four defeats have resulted in tapouts, including two by triangle choke.

While Ortega has become known more for his grappling abilities, he does not feel overmatched when fights remain standing.