It has been a busy year for the Ultimate Fighting Championship light heavyweight belt.

After making its home on Jon Jones’ shelf for four years, the title was abruptly transferred to Daniel Cormier, who won it with his third-round submission of Anthony Johnson in May. That fight represented his second crack at the title, and at the age of 36, the newfound champion’s legacy in the division is on the line in every fight. A loss here will likely relegate Cormier to a fun MMA trivia question, whereas a win puts a length of separation between his name and that of his nemesis Jones, whose shadow still looms over the division he used to rule.


It is fitting then that Cormier’s opponent in the UFC 192 main event on Saturday in Houston is the man who arguably gave Jones his toughest fight to date: Alexander Gustafsson. The Swede finds himself in strange waters, contending for the title following a devastating knockout loss to Johnson in January. Despite posting a 1-2 UFC record over the last two years, “The Mauler” is still among the division’s elite. This performance will serve to justify his otherwise undeserved spot in a title fight while also providing him with a chance at redemption following his nail-biting defeat to Jones in 2013.

No matter how questionable the context of the fight may be, Cormier-Gustafsson remains a high-level matchup and one of the more dynamic fights the division can put together. Let us see what the Tale of the Tape looks like: 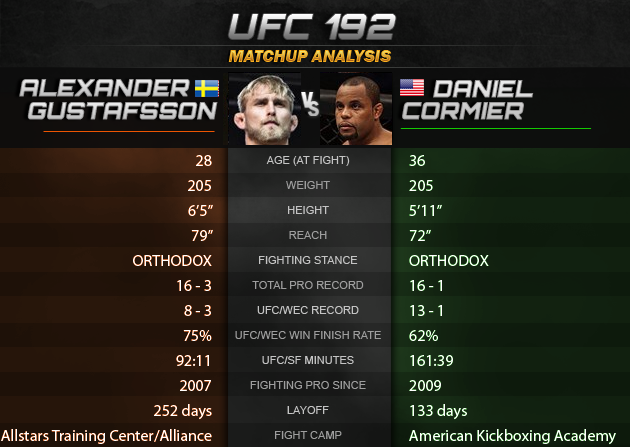 At the heart of the matchup is a staggering anthropometric clash. Their fighting styles are extensions of their body types: Gustafsson is at his best when he utilizes his reach and footwork to keep the fight at a comfortable distance, whereas the short, stalky Cormier is most efficient up close, where he can eliminate space and work his explosive grappling. The tension between these differences will likely dictate the outcome.

Though “DC” started fighting two years after his Swedish foe, he has competed in three more fights and boasts an additional hour in the cage. The numbers to look out for are the age and layoff differences. Cormier is no spring chicken, and the mileage from his MMA and wrestling days will likely show sooner than later. That being said, Cormier looked no worse for wear four months ago, and he should be the fresher fighter having fought more recently. The intangible at play here is that they both share the same last opponent in Johnson, who crushed “The Mauler” but was convincingly handled by “DC.” If there is a psychological edge, it would have to go to Cormier.

Every fight starts on the feet, so let us take a closer look at the striking matchup: 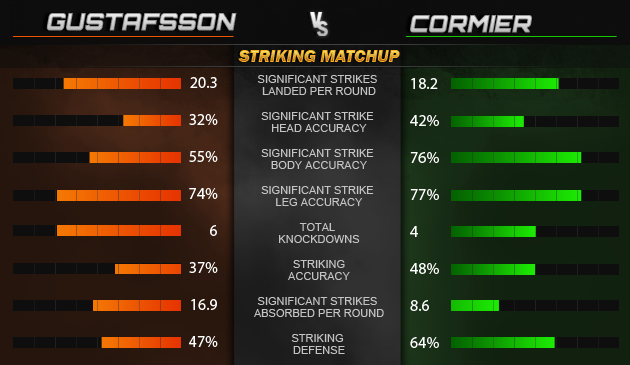 Of course, this is Gustafsson’s wheelhouse. Gustafsson dishes out a strike and a half more than Cormier every round, and as such, his accuracy is naturally lower. Eighty-six percent of his strikes come from distance, with eight percent and six percent on the ground and in the clinch. Gustafsson mostly -- 82 percent of the time -- throws head shots, with 11 percent aimed at the body and seven percent to the legs. Also of note, in three fewer fights, Gustafsson has recorded two more knockdowns. Those knockdowns are not a result of aggressive power punching, though. Instead, Gustafsson uses busy, shifty footwork that allows him to switch levels and find angles to consistently land clean shots. His success on the feet is predicated on his ability to stay at a comfortable distance.

Cormier may be less technical than his European foe, but he is none the less bellicose for it. In fact, Cormier’s preferred target is almost identical to the Swede’s. “DC” aims at the head 81 percent of the time, the body 12 percent and the legs seven percent. It is the difference in range that is most telling: 65% of Cormier’s strikes come at distance, with 18 percent on the ground and 17 percent in the clinch. That distribution is an indication that the sub-6-foot Olympic wrestler is not one to stick and move on the outside, opting instead to play to his strengths by closing the distance and entangling himself with his opponents. This strategy has worked well for the American Kickboxing Academy rep; he eats almost half as many strikes as Gustafsson. If Cormier is to have striking success, it will be a result of this defensive advantage, coupled with the fact that he is capable of throwing heavy enough leather to pull the plug on just about anyone.

Here is what the fight will look like if it makes it to the mat: 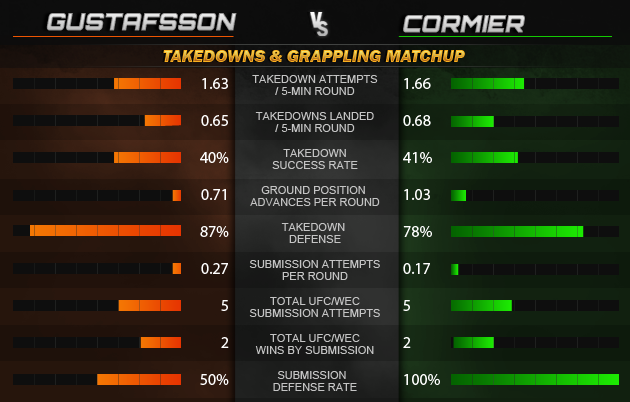 At a glance, these numbers are a bit surprising. Cormier no doubt has the better pure wrestling credentials, but there is little statistical separation between his MMA wrestling and Gustafsson’s. It would take a little more than three full rounds before Cormier attempts an extra takedown, and he completes them with about the same efficiency. Even more surprising, Gustafsson has been taken down less than Cormier, though it bears mentioning that “DC” was fighting heavyweights for most of his career. The real disparity comes into play once the fight hits the ground. Cormier is much more aggressive in advancing positions, and he throws a lot more strikes on the ground. Cormier averages almost 12 more ground strikes per fight than Gustafsson. He will likely be looking to spend a good deal of time hunting takedowns in the clinch and against the fence, where his size and physicality can be utilized to inflict damage while sapping Gustafsson’s energy.

Gustafsson’s grappling is mostly used defensively to keep the fight in his comfort zone, but his offensive wrestling is solid -- he was the first man to take down Jones -- and his submission game has worked against both men he has tried to submit thus far in his career. His submission defense is better than the numbers portray, too. Only Mauricio Rua and Phil Davis have been able to attempt a submission on him, the latter being successful five years ago. Gustafsson has since gone to train with the grappling ace at Alliance MMA, which has visibly improved his wrestling and submission game. Still, despite the closeness of the statistics, “The Mauler” will be better served staying away from Cormier’s areas of strengths, and his stout takedown defense will be crucial to any success he might have.


The incumbent champion is a modest favorite, anywhere in the range of -301 to -390. The betting lines for Gustafsson fall in a similar range of +200 to +305. As trite as it may be to say “styles make fights,” this is indeed an example of such a dynamic. If Cormier can pull the fight into the clinch and throw in some takedowns along the way, he will likely come away with the win. If Gustafsson can avoid the clinch and stay upright, the fight will progressively fall further in his favor. The irony of it all is that these are the men who gave Jones his two toughest tests, and while the winner will be called the undisputed light heavyweight champion of the world, you have to imagine the smirk of the estranged 205-pound king when those words are uttered. Regardless, this is an intriguing, high-profile fight for all the marbles. Can “DC” prove he is more than a passing trend in the division or will Gustafsson become the second light heavyweight in a row to win the title on the heels of a loss?