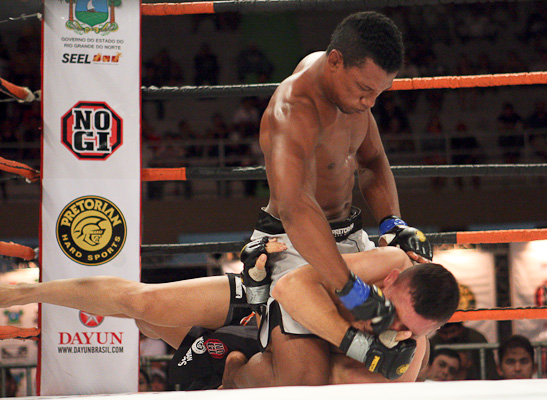 
Time to stuff your mouth full of bratwurst, take a massive swig of doppelbock and dust off your carefully preserved copy of David Hasselhoff’s “Looking for Freedom,” because the Ultimate Fighting Championship has finally come back to Germany.

UFC Fight Night “Munoz vs. Mousasi” takes place Saturday at the O2 World in Berlin and serves as the first of two company events slated for May 31. Highly regarded middleweights Mark Munoz and Gegard Mousasi will lock horns to close the show, but before they do, the preliminary draw promises to provide plenty of entertainment on UFC Fight Pass.

The highest-profile matchup on this undercard is clearly the bantamweight showdown between Iuri Alcantara and Vaughan Lee. Most viewed Alcantara as a top-10 bantamweight prior to his defeat to Urijah Faber, and a hard-fought win over Wilson Reis has, at the very least, allowed “Marajo” to hold his spot until further notice.

I do not know if Alcantara will ever earn that elusive bantamweight title shot, but I do believe his name will hover around the prospect for some time longer. At 33 years old, Alcantara cannot afford to waste time, but I think the former Jungle Fight champion has what it takes to make real noise near the top of the division for at least another year or two.

Currently standing in his way is British veteran Lee, who put forth arguably the best performance of his UFC career in his last outing, a clear-cut decision win over Nam Phan in March. Lee is at his best when he is able to control distance and use sharp counterpunching to make his opponents pay for their missteps. Alcantara probably wields more brute strength than the Englishman, but Lee could make this fight very interesting if he can stuff the Brazilian’s takedowns and turn the bout into a boxing match. However, if “Marajo” can time Vaughan with power punches or drag him to the canvas, it could be a rough night for the Brit.

This crucial bantamweight clash is only one reason to brew a pot of coffee and catch the UFC Fight Night “Munoz vs. Mousasi” undercard. Here are four more:


Nick Hein is a German prospect worth checking out.

The lightweight is probably a tad undersized for the division by American standards, but he appears to possess the type of strength and athleticism to deal with many of the UFC’s 155-pounders.

Hein is no novice standing, but I have been most impressed with his work in the clinch and on the mat. The 30-year-old is aggressive without being reckless, though he can get a little wild with his power punching while trying to close the distance. He owns a quick shot and can also take down fighters with a variety of trips, thanks in large part to a powerful core and lower body. Once on the mat, he is a capable guard-passer and possesses excellent patience when he secures dominant positions. He can also execute a mean backflip when he wins.

Hein will square off with Drew Dober, a capable grappler in his own right who has submitted the likes of UFC veteran T.J. O’Brien. The 25-year-old will no doubt enter the Octagon looking to erase the memory of his lackluster debut against Sean Spencer. How will he hold up against the surging German? 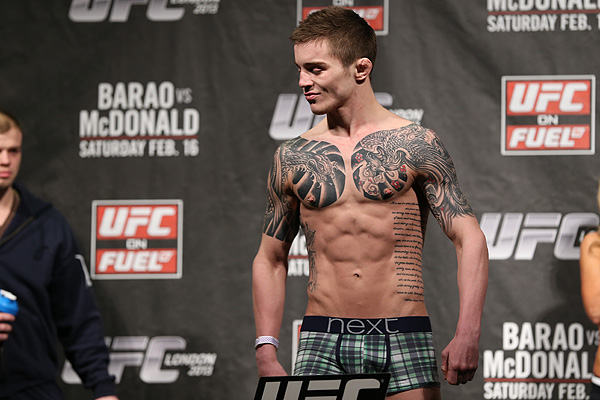 Photo: Dave Mandel/Sherdog.com
Ogle is 1-3 in the UFC.
I do not know how long Andy Ogle will be able to stand on the UFC’s featherweight battleground, but for however long his UFC run lasts, he will no doubt stand tall. “The Ultimate Fighter 14” alumnus has gone just 1-3 in his Octagon stint, but he has fought tooth-and-nail in every bout, even when overmatched in the talent department.

This will be an important factor in his upcoming clash with Maximo Blanco, who is the superior athlete no matter how you slice it. However, Blanco has also shown the tendency to self-destruct and underperform. He has not come close to resembling the monster he once appeared to be during his time on the Japanese circuit, and I think Ogle’s audaciousness could present some problems for him should the fight progress past the opening period.

Both of these featherweights will enter the cage hoping to avoid a third straight loss and a possible pink slip. Which man will halt his skid?


Krzysztof Jotko and Pawel Pawlak will ride perfect pro records into their Octagon debuts, but will these young Poles be able to hold onto their spotless ledgers?

Jotko has won 14 straight fights to begin his career, though eight of those wins have come by decision. The 24-year-old made his UFC debut in December, handing Bruno Santos his first defeat at UFC Fight Night “Hunt vs. Bigfoot.” Now, the Pole will face off with 32-year old Swede Magnus Cedenblad, who picked up his first UFC victory in August in a 57-second submission of Jared Hamman.

Meanwhile, Pawlak has posted 10 consecutive pro wins over four years of competition, stopping nine opponents inside of three rounds. Jotko’s countryman has not gone the distance since September 2010 and scored five finishes last year, most recently earning a third-round technical knockout on Polish soil in November. Pawlak will make his Octagon debut against Peter Sobotta, a UFC veteran making his return to the promotion on the strength of a five-fight winning streak.

Are Jotko and Pawlak future contenders or are they just pretenders? We will soon have more information on the matter.


The heavyweight division is probably the best it has ever been, but there is still plenty of room for up-and-comers to make a mark. Ruslan Magomedov and Viktor Pesta will attempt to do just that when the European big men collide in a battle of prospects.

Both men have proven themselves to be capable finishers, though the undefeated Pesta owns the more efficient kill ratio, stopping seven of his nine victims inside the distance. Magomedov, meanwhile, has suffered just a single loss in his 12-fight career, finishing six of his foes by knockout or submission.

Which, if either, of these surging heavyweight prospects will show that he is ready for the big time?