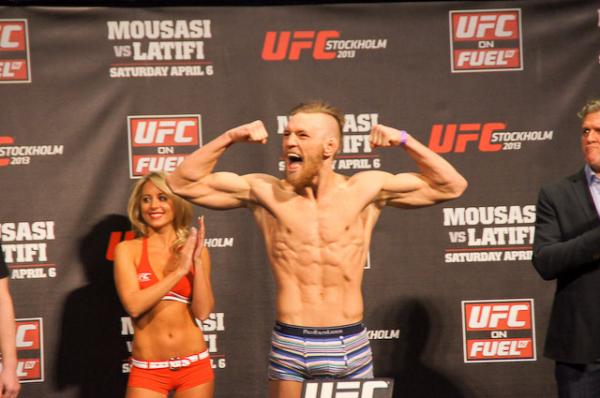 
If we learned anything from the fallout that resulted from the cancellation of UFC 151 in September, it is this: no matter the circumstances, the show must go on.

As the original UFC on Fuel TV 9 main event began to crumble more quickly than Philip De Fries on a takedown, credit those involved for doing everything they could to make sure that Stockholm still had a headliner for Saturday. When the Swedish Mixed Martial Arts Federation officially removed Alexander Gustafsson from the card due to a cut below the light heavyweight’s left eyebrow, Gegard Mousasi had no reason to remain on the card, especially when he was instead offered a high-risk, no-reward matchup with the relatively unknown Ilir Latifi.

If having only four days to prepare for an opponent who was the stylistic polar opposite of Gustafsson was not difficult enough, Mousasi was also nursing a knee injury that, according to him, would have shelved “95 percent of other fighters.” Despite the injury and the lack of a prestigious foe, Mousasi elected to stay put. Not everyone in his situation -- a former champion in multiple promotions looking to make a splash in his Octagon debut -- would have done the same.

Despite being cast as a nothing-to-lose underdog, Latifi could have easily said no, as well. With no training camp of which to speak, the stocky Malmo, Sweden, resident endured a grueling 27-pound weight cut in three days in order to face one of the top light heavyweights in the world. Even “The Sledgehammer” himself had to know the odds would not be in his favor when he stood across from Mousasi at the Ericsson Globe Arena. Still, Latifi jumped in his car and drove to Stockholm almost as soon as the idea was presented to him.

For the Ultimate Fighting Championship, it might have been easier to just scrap the main event altogether. After all, this was not a pay-per-view requiring big-ticket stars on its fight poster. This was Fuel TV, likely to be watched by far less viewers -- in the United States at least -- than its weekly episodes of “The Ultimate Fighter 17.” Surely, bumping the scheduled co-main event between Ross Pearson and Ryan Couture to the top of the marquee would work out just fine. Instead, the promotion scrambled and found a replacement in Latifi, who, while by no means a superstar, was still well-recognized by fight fans in his home country.

This is not to sugarcoat the fact that UFC on Fuel TV 9 lacked serious drawing power. Losing Gustafsson was a major blow, not only for ticket buyers and viewers but also for the 205-pound title picture. However, without anything resembling a true headliner, the card had something of an egalitarian feel, with each fighter getting more of an opportunity to place his own stamp on the festivities.

No one fighter did that more emphatically than former Cage Warriors Fighting Championship standout Conor McGregor. The Irishman fought with flair inside the cage, stopping Marcus Brimage in just 67 seconds, and displayed his own brand of quotable charisma in the aftermath. On a card that was hungry for a signature moment or star, “Notorious” took the initiative.

“It was one of those situations where going into a card -- and the media didn’t do it to us this time, but some of the fans did -- it drives me crazy when people start talking [expletive] about a card that has never even happened yet. You start saying ‘this card sucks’ and this and that because one guy fell off the card,” UFC President Dana White said at the post-fight press conference. “This is a card full of talented people. There were talks about canceling the card and stupid [expletive] like that. If you put on fights, how do people like Conor McGregor, how do they get noticed if you don’t put on a show?”

McGregor’s breakout performance is yet another example of why some of us watch everything from the first Facebook prelim to the last bout of the night. In the fight game, so much hinges on the marketability of a card’s main event, but fighters -- Latifi notwithstanding -- do not become feature attractions overnight. Before Gustafsson was helping bring events to his home country, “The Mauler” was battling the likes of Cyrille Diabate, James Te Huna and Matt Hamill on the undercard of events propped up by established names such as Ortiz, Evans, Penn and Bisping.

McGregor entered his clash with Brimage as something of an unproven commodity to those outside of Europe. Sure, his resume was formidable and his highlights impressive, but who had he beaten? Brimage went so far as to call McGregor’s opposition “bums” in an interview on UFC.com. Clearly, McGregor had potential, but only his performance would determine his path within the company. After treating Brimage with the same disdain previously reserved for his last few Cage Warriors opponents, McGregor is already being targeted for more high-profile bouts, first in Boston and potentially down the road in Ireland.

Count White among those who became believers on Saturday.

“He did some good for himself getting on the [Aug. 17] Boston card. His first fight in the UFC, he came out calm and smooth, cool and collected. I love this kid. The hype is real,” White said on Fuel TV.

If you were disappointed by what the UFC had to offer this weekend, you were not lacking for options on the MMA front. Bellator MMA, One Fighting Championship and Invicta Fighting Championships all held deep, entertaining cards, allowing fans the opportunity to watch the likes of Pat Curran, Cris “Cyborg” Justino, Michelle Waterson and Shinya Aoki, to name a few.

However, as Garry Brooks, the UFC’s executive vice president and managing director for Europe, the Middle East and Africa, emphasized all week, the UFC is the sport’s most recognizable brand. People will tune in when a familiar logo is attached to a product. UFC on Fuel TV 9 will not go down as anywhere near the most memorable offering from that brand, but it might very well be remembered as the night Mr. McGregor stepped into the limelight. That alone is reason enough as to why the show must go on.