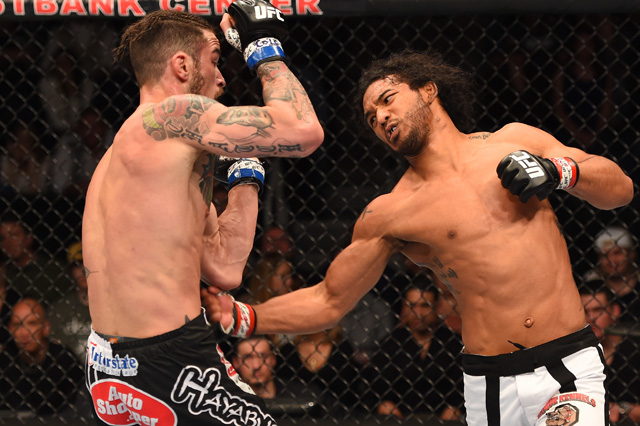 
Benson Henderson did just fine as a welterweight.

A former Ultimate Fighting Championship and World Extreme Cagefighting titleholder at 155 pounds, Henderson submitted Brandon Thatch with a fourth-round rear-naked choke in the UFC Fight Night “Henderson vs. Thatch” headliner on Saturday at the 1stBank Center in Broomfield, Colo. Thatch (11-2, 2-1 UFC) requested relief from referee Herb Dean 3:58 into round four, as he was beaten for the first time since September 2008.

Henderson (22-5, 10-3 UFC), who replaced the injured Stephen Thompson on short notice, drowned the heralded Elevation Fight Team export in deep waters. He pecked away with jabs and leg kicks, all while investing heavily in body blows. Thatch’s size and power became factors in the second round, where he scored with a pair of trip takedowns and appeared to wobble “Smooth” with a left uppercut. Henderson weathered his advances, extended the fight and wore down the bigger man. Thatch developed swelling under both eyes, yielded a takedown and surrendered his back in round three. It was a sign of things to come.

MMA Lab’s Henderson made his move in the fourth round, as he ducked under Thatch’s punches for a double-leg takedown and went to work. He maintained a top position, advanced to the back and cinched the choke when the opportunity presented itself.

The first 10 minutes were essentially even, though Holloway benefitted from a pair of inadvertent second-round head butts that split open the Brazilian jiu-jitsu black belt’s left brow. The gnarly cut left Miller (21-9, 10-7 UFC) -- who at times stymied the Hawaiian prospect with his length -- visibly impaired and frustrated, setting the stage for a lopsided round three. There, Holloway stuck “The Ultimate Fighter” Season 5 alum with step-in straight lefts and staggered him with a counter right hook. Miller pulled guard in a desperate attempt at a Hail Mary submission in the waning moments, but his efforts proved fruitless.


“The Ultimate Fighter” Season 16 semifinalist Neil Magny submitted former Heat champion Kiichi Kunimoto with a third-round rear-naked choke in a welterweight showcase. Kunimoto (18-6-2, 3-1 UFC), who had not been finished in more than seven years, tapped out 1:22 into round three.

Magny (14-3, 7-2 UFC) used his height, reach and superiority in the clinch to chip away at the Japanese veteran’s resolve. The 27-year-old Elevation Fight Team rep nearly finished at the end of the second round, where he punched and elbowed his way out of a Kunimoto kimura, jumped to his back and let loose with strikes. Only the bell prevented the stoppage. Early in round three, Magny dove on a takedown, climbed to the exhausted Kunimoto’s back, softened him with unanswered punches and set the choke for his sixth straight victory.


Four-time Australian Olympian Daniel Kelly kept his perfect professional record intact with a unanimous decision over “The Ultimate Fighter” Season 19 graduate Patrick Walsh in a featured middleweight clash. Kelly (9-0, 2-0 UFC) swept the scorecards with 29-28, 29-28 and 30-27 marks from the judges.

Walsh (5-2, 1-1 UFC) -- who missed weight for the match by five pounds -- spent his time posturing, grinning and firing looping punches at the judoka. Some landed. Many missed. Neither man threw a kick. Kelly surrendered a takedown late in the first round, but he paired an effective jab with stinging left hands over the final 10 minutes and pulled away, ignoring the taunts of his counterpart.


Busy hands, tactical takedowns and a superior gas tank carried Xtreme Couture’s Kevin Lee to a unanimous decision over Michel Richard Cunha dos Prazeres in a featured scrap at 155 pounds. All three cageside judges scored it for Lee (10-1, 3-1 UFC): 30-27, 29-28 and 30-27.

Prazeres (18-2, 2-2 UFC) was reduced to winging punches and diving on desperate takedowns. Lee punched well in combination behind a stiff jab, mixed in sporadic kicks and turned up the heat late in the fight. The 22-year-old Detroit native struck for multiple takedowns in the third round, piled up points with ground-and-pound and nearly secured a finish on a weary Prazeres with a rear-naked choke in the closing seconds.

Lee will ride a three-fight winning streak into his next appearance.


Fast-rising blue-chip prospect Ray Borg submitted Chris Kelades with a third-round kimura in a flyweight showcase. Kelades (8-2, 1-1 UFC) asked out of the match 2:56 into round three, his modest two-fight winning streak a thing of the past.

Takedowns, ground-and-pound, guard passes and a hyperactive submission game tipped the Borg spear. The 21-year-old snatched an arm-triangle choke in the first round, pulled off a beautiful guillotine-to-brabo choke transition in the second and finally solved the Kelades riddle in the third. There, he executed his final takedown, slid to half guard and framed the kimura. Borg (8-1, 2-1 UFC) then stepped over the Canadian’s head, cranked the shoulder and drew the tapout.